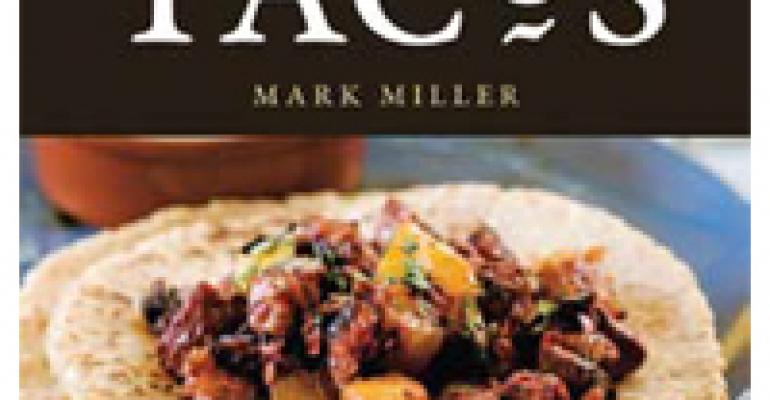 Tacos of the Gods

Here's a book so in tune with the culinary times that if it didn't exist, it would almost have to be written. We're talking about Mark Miller's Tacos (Ten Speed Press, $21.95), in which one of the founding fathers of modern Southwestern Cuisine takes on the hottest street food trend of the day.

The 75 recipes Miller offers here reflect both the in-depth knowledge he gathered during his extensive food-based travels in Mexico and the time he spent at the ground-breaking Coyote Café in Santa Fe. Under Miller's command, that restaurant rose to national prominence and stayed there. He later sold it, and today Coyote Café still offers a six-item taco menu (priced in the $14-$15 range) in the more casual cantina part of its operation.

Miller makes a strong case about why tacos have gone mainstream. “They're food that's fresh, fast, economical, and easy, a good match to the rapid pace of our modern lifestyle,” he says. “You don't need lots of expensive equipment to make them. The techniques are simple. No years of culinary experience required.”

That's true for some basic tacos, but Miller is passing along directions for chef-caliber versions in this book. Estimated prep times run as high as six hours on some concoctions, and you'll have to do some serious mail-order chile shopping to track down a few of the flavorful ingredients he relies on here.

But what a payoff if you do: dozens of offerings that are delicious and distinctive enough to go head-to-head with those from Los Angeles' Kogi Korean BBQ truck, cool new versions from freshly minted taco truck queens Mary Sue Milliken and Susan Feniger and entries from the rest of the current wave of mobile taco purveyors. These outfits have raised the bar on taco quality, simultaneously creating a mob of foodie-class taco eaters who approach the genre with significantly heightened expectations, including the price points at which great tacos are sold.

Through it all, Miller dispenses his vast knowledge of Mexican and Southwestern seasonings — the real kicker to much of his cuisine. Top-notch technique notes, too.

If you want to cash in on the mobile gourmet taco trend, Miller can help you do so. If you don't, keep you eyes open to see if a rig from the emerging fleet of taco trucks decides to park somewhere in your restaurant's neighborhood. Then consult this book so you can fire back with something even better.