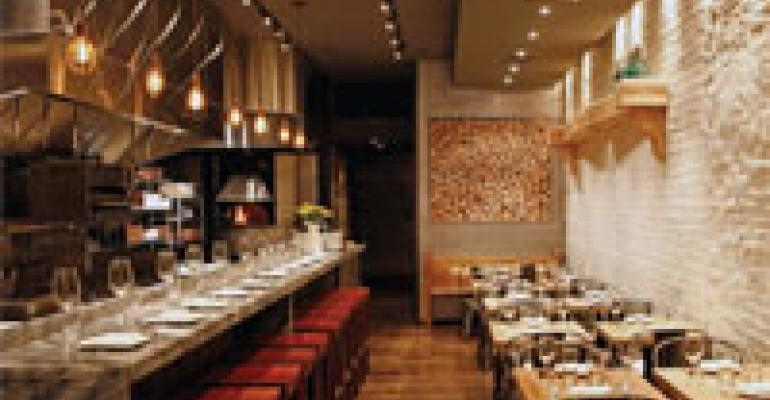 They were the new kids on the block when they opened their first Philadelphia venture back in 2002. Now Marcie Turney and Valerie Safran dominate that block, operating six businesses — three of them restaurants — on either side of a 300-foot stretch of South 13th Street in Philly's once-sketchy Center City. Their strategy? These serial entrepreneurs didn't open their flagship operation first and spin off allied ventures later. Instead, they carefully built up to what now ranks as their signature restaurant, Barbuzzo Mediterranean Kitchen & Bar, which opened its doors last September.

The duo — Turney's the chef, Safran the g.m. — are local heroes, a two-person urban renewal team who financed their first deal with zero-interest credit cards. “Ever since we moved into this neighborhood in 2002, we've dreamed of building 13th Street into a lively corridor of restaurants, shops and cafés,” says Turney. “I couldn't be more proud to have had a hand in creating the vibrant culture that exists here today.”

With all this going on, it seems crazy for these two women to tackle what is far and away their most ambitious culinary project yet: Barbuzzo. But Turney, who was executive chef at Philadelphia restaurants Valanni and Audrey Claire before opening her own places, says she always wanted to return to that style of cooking.

Her instincts were on target. Barbuzzo was a critical and popular success from Day One. “Chef Marcie Turney comes into her own here,” says the Philadelphia News. This is high praise indeed, given the acclaim she earned for Lolita and Bindi, both of which hold places in Philly magazine's ranking of the town's top 50 restaurants (a list Barbuzzo entered in the Top 10 right out of the gate).

Philadelphia Inquirer critic Craig LaBan didn't know Turney had it in her, either, saying that “Turney's kitchen manages to effortlessly hit some current buzz themes — artisan pizzas, sharing plates, house-made charcuterie, bone barrow — without lapsing into the abstractions of molecular gastronomy. As she's matured over the years and streamlined her food, Turney's dishes rise simply on vivid, rustic flavors that, despite the Mediterranean theme, channel seasonality as diligently as any menu in town.”

No wonder Barbuzzo made the semifinalist list for the 2011 James Beard Award for Best New Restaurant. Turney's menu is a pizza-pasta-plates lineup that offers 34 choices in all. It kicks off with a five-item “Snacks & Spreads” section that includes items both on-trend (roasted marrow bones with shaved radish, blood orange jam and crostini, $8) and beyond-trend (“pig popcorn,” i.e., house-smoked pork rinds with apple cider vinegar powder, espelette chile & horseradish aioli, $5) choices. Three boards (all-vegetable, house-cured charcuterie and a five-varieties-of-goat-cheese spectacular) sell in the $13-$16 range.

It's surprising that customers have any room for dessert after working their way through this tantalizing menu. But let's hope they do, because Barbuzzo's pastry chef, Erin Stafford, is on the 2011 Beard list for Outstanding Pastry Chef, too. Stafford's big sellers so far have been a salted caramel budino with dark chocolate crust, vanilla bean caramel and sea salt ($8) and blood orange tiramisu with fresh whipped cream and almond amaretti crumble ($8).

Few restaurants ever come out of the gate as strongly as this one has. That's why Philadelphia diners are anxious to see what Turney and Safran come up with next. Their fingers are crossed that whatever it is, it will be located on 13th Street, too.