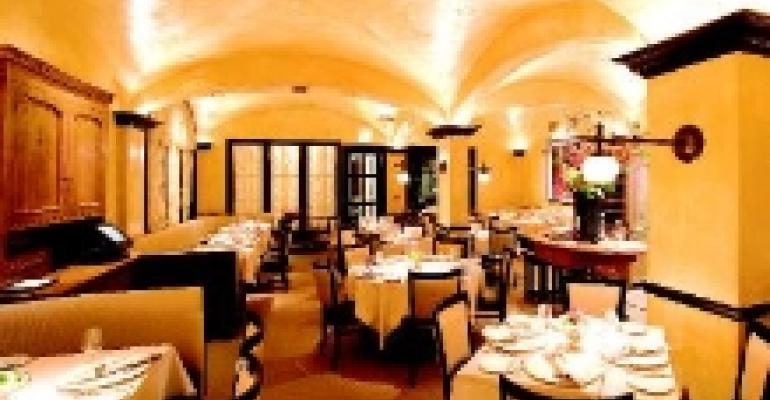 The comfort food Doug Keane dished up as chef/partner at Napa Valley down-home spot Market in St. Helena, CA, was really good —so good that RH named him a Rising Star in our Aug. 2003 issue. Market's homey bill of fare (meatloaf, fried chicken, garlic mashed potatoes, fish and chips) broke no culinary barriers. But each item was made using pristine seasonal and regional ingredients, and Keane and partner Nick Peyton served it with true hospitality. They'd even bag up dinner for those who preferred takeout. Critics and customers alike embraced their polished approach to serving tasty, yet affordable, cuisine.

Two years later, Keane is still turning out tasty and affordable cuisine in California's wine country, and Peyton's still working his magic in the front of the house. But their comfort food days are over. Now this pair has risen into the culinary world's stratosphere at their new restaurant, Cyrus. It's in downtown Healdsburg in Sonoma Valley, Napa's next-door neighbor.

Nearly every reviewer who visits Cyrus feels compelled to compare it to Thomas Keller's French Laundry in nearby Yountville, widely regarded as one of the world's best restaurants. They do so even though the tab at Keller's place can often be double what Keane and Peyton charge at Cyrus.

From a drop-in spot to destination dining—how'd Keane and Peyton pull this miracle off?

A fortuitous blend of talent, experience and ambition made it possible.

The 33-year-old Keane, a Cornell School of Hotel Administration grad, spent time in some fine kitchens before striking out on his own at Market. First, he worked his way up to sous chef at the Four Seasons in New York City, then spent a year at French standout Lespinasse under Gray Kunz. Then the Michigan native headed to San Francisco, interspersing two stints at Jardiniere (the second as executive chef) with a gig as sous chef at Gary Danko. All of this by age 30— quite an achievement for a guy with no formal culinary training.

While working at Gary Danko, Keane hit it off with maitre d' deluxe Nick Peyton, and in 2003 the pair opened Market in Napa Valley, which they still own. But the two soon turned their attention to developing Cyrus over in Sonoma. Located adjacent to the new and luxurious 16-room Les Mars Hotel, the 65-seat Cyrus evolved into this duo's dream restaurant. It's pretty dreamy for customers, too. The experience begins when arriving guests approach the hostess podium. Whoever's manning that post picks up a telephone and gets Keane on the line, letting him know it's time to fire the amuse course for the arriving party.

Once guests have been seated, a champagne-and-caviar cart cruises by. Then it's time to consider the order. Patrons can select a three-($52), four-($63) or five-($74) course prix fixe meal from the tantalizing offerings on the printed menu. There are seven sections (vegetables; lobster; fish and shellfish; risotto; foie gras; poultry; and meat). Guests can mix and match from any category. Want all foie-gras courses? You'll get 'em.

A leave-it-to-the-chef sevencourse tasting menu ($85) comes with matching wines for an additional $47—a bargain at this level of dining.

It's a high-end, unstuffy wine country experience for about half the price of the French Laundry. Sommelier Jason Alexander's 33-page international wine list matches Keane's adventurous food. How wild a customers goes in ordering wine will determine the final tab.

And yet the relatively modest size of the tab is not what people remember best about Cyrus. It's the total experience. What's most notable about all the critical praise is the stature of the people giving it. Many are the same writers who made French Laundry such a big deal in the first place.

San Francisco Chronicle critic Michael Bauer could barely contain himself after dining at Cyrus. "Cyrus is blazing a new culinary trail, but there are no bumps in the road as far as I can tell," he writes. "Keane cooks at a phenomenal culinary pitch...Dish after dish set up vibrant contrasts...he knows how to blend surprising flavors to maximum effect...the elements waltz across the tongue...destined to become a benchmark...." You have to go back a long way to find Bauer rhapsodizing like this, especially when writing about a restaurant only a few months old.

Bauer's not alone. "Sonoma has never had a restaurant with the high profile of the French Laundry," says the Los Angeles Times S. Irene Virbila. "The new Cyrus in Healdsburg may change all that." RH's own John Mariani, writing for Bloomberg News Features, says this of Cyrus: "Its kitchen is the equal of Napa's illustrious French Laundry in Yountville." Keane defines his cooking style as "contemporary luxury." It's kind of a vague description, but critics get it loud and clear. Our advice: Get a reservation soon. Cyrus is going to be one tough ticket.