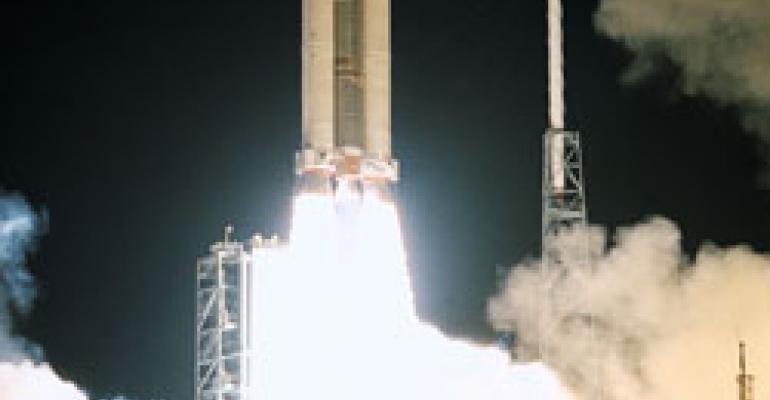 MASTER OF THE UNIVERSE

God knows that MREs-Meals Ready to Eat-have taken on new prominence lately. No one says these go-anywhere, never-spoil items taste good, but they're still welcome by everyone from soldiers in Iraq to victims of Hurricanes Katrina and Rita along the Gulf Coast. In circumstances like these folks find themselves in, survival and sustenance are everything. They'll worry about taste and texture later.

But they hold themselves to a higher standard in France, or at least at the 15-nation European Space Agency headquartered in Paris. In preparation for ESA's planned mission to Mars, the agency has engaged Alain Ducasse Formation--the consulting arm of the chef's far-flung empire--to come up with first-rate space travel food brought from Earth and, even more challenging, to develop recipes that could be made with ingredients astronauts would grow themselves while on board their spacecraft.

The planned 24-month mission would require six months to get to Mars and six more to return, with the astronauts spending a full year on the surface of the planet. It's asking a lot to haul a two-year supply of food around space, so the goal is to grow perhaps 10 percent of needed food during the space flight and about half of it while on the planet. Ducasse's role is to find ways to make all this palatable.

"Being able to grow plants is fine, but they have to be prepared before eating, too. So the next challenge is to cook a variety of good food, which in addition to being healthy and sufficiently nutritious, also provides physiological support for the crew, away from Earth for such a long time," says Christophe Lasseur, ESA's biological life support coordinator.

That's not going to be easy, and recipes for space-grown foods are still under development by Ducasse's company. But the chef, who has opened acclaimed restaurants in Paris, Monaco, London, New York City, Las Vegas and the Far East, has already come up with some dandy take-along items for space flight. Two French explorers tested Ducasse's creations this summer during a 500-mile skiing expedition that traversed the full width of Greenland.

"The expedition gave us another opportunity to have our space food evaluated by people under stress living in hostile environments similar to those experienced by astronauts," says Pierre Brisson, head of ESA's Technology and Promotion office.

So how was the food?

"It was excellent and gave the impression of a real home-cooked meal. It was really nice to have better food than the traditional meals we usually bring with us on an expedition," says explorer Olivier Pezeron. "In particular I enjoyed the semolina dessert and the duck with capers."

"The crystallized carrots were fantastic and the swordfish was very good," adds fellow adventurer Arnaud Fauvet.

"After this experience we are now ready to be candidates for a mission to the International Space Station and even for a flight to Mars, just as long as the food is as good as the meals prepared by the chefs of Alain Ducasse group," the pair says.

It's the second time Ducasse's space food has passed a terrestrial test with flying colors. Previously, driver Henri Pescarolo gave it a try during the grueling Dakar Rally in the Sahara desert. His menu included pasta, squid, duck confit with capers and rice cake with caramel sauce. "Delicious," was Pescarolo's post-race comment on the food.