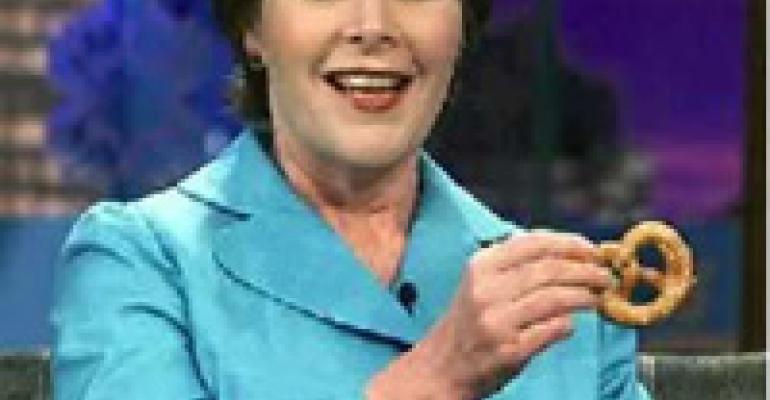 BE CAREFUL WHAT YOU WISH FOR

So what qualities does Mrs. Bush expect the new chef to have? Here's what she told Newsweek about her expectations for the new White House chef.

"I'm looking for somebody who can really showcase American foods. This is a very interesting job for chefs right now, especially because chefs have become such celebrities in the United States. And obviously those chefs who already have a lot of cookbooks, who already have television shows, wouldn't want to be the White House chef..."

Good luck finding a clue in that statement. Let's try this: So what do the President and First Lady prefer to eat? "We like spicy food of all kinds," she says. "We like, obviously, Tex-Mex and barbecue. We like all sorts of foods. George is a very good eater."

The diplomatic Scheib was famous for rolling with the political punches, routinely making peanut-butter-and-jelly sandwiches for President Bush. But his chances to show off on special occasions were few and far between. The Bushes last hosted a full-blown state dinner back in Oct. 2003, when the president of Kenya was the guest of honor. The menu for that meal was a salad of avocado and heirloom tomato in toasted cumin sauce, a first course of grilled halibut, bay scallop risotto and lobster sauce and a main course of rack of lamb, sweet potato flan and accompanying vegetables.

At least it looks like the new chef's workload could be relatively light. Scheib oversaw a full-time staff of five

and a part-time staff of 20. His role was to manage and prepare all menus and meals for the First Family and their private entertaining, as well as all official and state functions of the presidency. The Washington Post reports that during their first term, the Bushes hosted four state dinners in four years. By way of comparison, President George H.W. Bush and his wife, Barbara, hosted twice that many each year during their four-year term.