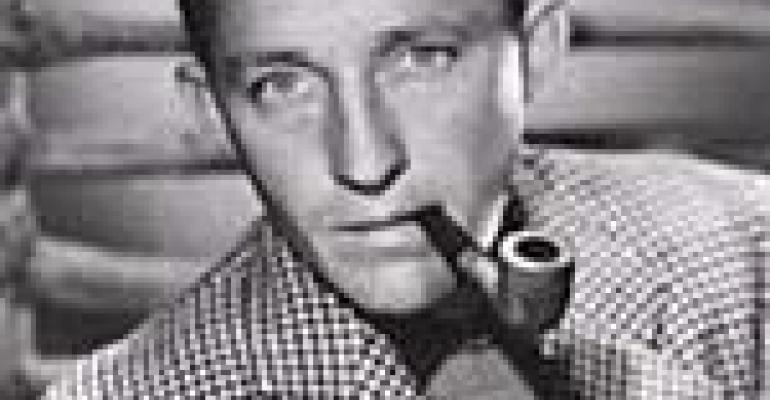 Who would believe you could build a five-unit chain of tribute restaurants based on the celebrity value of someone who has been dead for 28 years, one where the owners chose "country club attire enforced" as the dress code? Could this possibly work?

At first glance, the idea of opening a string of Bing Crosby's Restaurant & Piano Lounges across the West seems doomed to failure. Sure, there's money to be made in retro-themed operations, as proprietors of tiki lounges or those that employ a Rat Pack motif will tell you. But Bing Crosby hit his peak in the 1940s. Not many who lived through his era are still around to feel nostalgic about it, and even fewer of them are able to handle a night on the town.

No matter. The first unit opened late last year in Walnut Creek, Cal., near San Francisco, and was a major hit right off the bat. It's operated by Dudum Sports and Entertainment (DSE), which has previous experience operating celebrity-themed restaurants. The company also runs a pair of Bay Area restaurants named after San Francisco Giant Hall of Fame slugger Willie McCovey.

For its Bing Crosby venture, DSE went first-class. It brought on executive chef Frank Palmer, formerly of the

The décor is classy and swank, and features memorabilia from Bing Crosby's lengthy career. And nobody has memorabilia quite like Bing Crosby does. The residue of his star power has dwindled lately to "White Christmas" (30 million copies sold) and the popular pro golf tournament at Pebble Beach that bears his name. But Crosby was the king of all media in his era. He made 55 feature films, winning a "Best Actor" Oscar for "Going My Way," beating out fellow-nominee Cary Grant in the process. Adjusted for inflation, Crosby ranks as the fourth highest male box-office draw ever.

His recording career included more than 1,700 songs, 42 of them topping the charts at number one. The lounge at Bing Crosby's Restaurant & Piano Bar features 42 different martinis, one for each of Crosby's #1 hits. Twenty-one of his albums went gold.

The atmosphere is little more aggressive at Ray Lewis' Full Moon Bar-B-Que in Baltimore, which the seven-time All-Pro Baltimore Ravens linebacker opened in February. Lewis partnered with brothers Joseph and David Maluff, who bought the original Full Moon location in downtown Birmingham, Ala., in 1997 and have since expanded it in that market to nearby Homewood and Hoover with plans to open four more nearby.

The original place is known as Pat James' Full Moon Bar-B-Que in Alabama, Pat James being one of sainted Alabama coach Bear Bryant's outstanding players. To go national, the Maluffs formed a new company, Our House LLC, and began to seek out high-profile athletes in other markets. They picked a dandy in Lewis, who enjoys a national reputation as the ringleader of one of the NFL's best defenses. His image took a serious hit in 2000, however, when Lewis had to plea bargain his way out of a murder charge related to an incident outside an Atlanta nightclub. The Maluffs appear confident that this past legal trouble won't affect their new business venture.

"An athlete of Ray Lewis' caliber will create hype among tourists and locals," David Maluff observed on a Ravens web site, "but we also know the food will sell."

Indeed, the offerings of Ray Lewis' Full Moon Bar-B-Que are proven winners in Birmingham, a part of the South where barbecue is akin to religion. If your food can make it there, it can make it anywhere.

The Baltimore version of the Full Moon offers a standard lineup of barbecue favorites, all of them prepared in the restaurant's hickory-burning open-wood fire pit, plus plenty of other Southern favorites. Some of Lewis' memorabilia adorns the walls here, but the Ravens star is counting on the food and atmosphere to keep the customers coming back.

"It's definitely not a sports bar," Lewis says. "It's more of a family-oriented place that will give you a totally different vibe."

Lewis' restaurant encompasses 6,200 square feet and seats 215 guests. The Maluffs are hoping for annual sales between $4 and $5 million.

The next markets to offer a Full Moon include Nashville, Atlanta, Philadelphia and Washington.

Perhaps the most unusual celebrity-themed sports bar and restaurant opened in late February in Houston. It's Yao Restaurant, a 440-seat Chinese food/sports bar operation named after 7-foot-6-inch Houston Rockets All-Star center Yao Ming. He's the celebrity tie-in, but the actual owners are his father Yao Zhiyuan and his mother Fang Feng Di. They've moved from China to a suburb near Houston and say they will work the floor of their new place every day.

Some of Yao Restaurant's food is made following recipes contributed by his mother, and few other dishes reflect the cuisine of Yao's home near Shanghai. But most of the menu consists of dishes that come from co-owner and chef George Phou. Yao and his parents are the public face of the restaurant, but Phou, proprietor of Houston's Fu's Garden restaurant, is handling most of the operational aspects. Three 70-inch TV screens ensure a good turnout any time the Rockets play on TV.

Keep an eye on these places to see how well they work. But given their combination of star power out front and solid operational experience in the back, we're betting they'll find success.