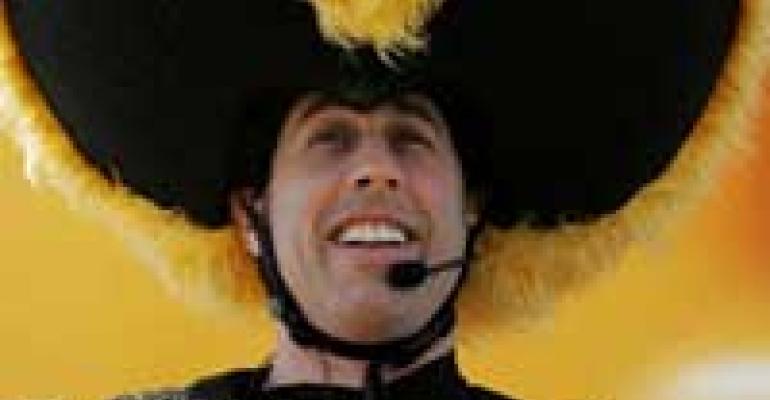 Right now, the Internet is the focus of the recipe-pirating watchdogs. We don’t know much about Attributor, a company that claims its sophisticated software can go out onto the Web and figure out who’s copying what from whom. But because its biggest clients are newsgathering giants the Associated Press and Reuters, we’re figuring Attributor is able to do what it says it can do.

And what it’s doing on the recipe front is an eye-opener. Foodie sites like epicurious.com and allrecipes.com turned to Attributor when they wanted to know where else on the web their original content was turning up. More specifically, they were wondering who was taking their recipes, posting them on other sites, and then charging advertisers to appear next to them on those other sites, instead of those advertisers paying to appear next to those recipes on epicurious.com and allrecipes.com, which had developed and tested the recipes in the first place.

Attributor’s limited study found more than 10,000 instances in which original recipes had been copied. Sixty percent of them appeared without attribution. The company estimates that lost online ad revenue amounted to $1.6 million for Epicurious and $3.1 million for AllRecipes per year. Online recipe pirating is “rampant,” says Attributor spokesman Rich Pearson.

It would be a clear case of copyright infringement…if recipes could indeed be copyrighted. They can’t. The U.S. Copyright Office puts it this way: “Mere listings of ingredients as in recipes, formulas, compounds or prescriptions are not subject to copyright protection.” Preparation directions and other material that accompany a recipe, however, are. You can copyright “substantial literary expression in the form of an explanation or directions,” USCO says.

So Jessica Seinfeld is in the clear then, right? Sort of. She still might be guilty of plagiarism, a crime not punishable by law. Instead, plagiarists are branded as dishonest creeps who pass off the work of others as their own. In the court of public opinion, plagiarism does matter, at least when you’re trying to sell books.

But what about the restaurant world, where there’s plenty of de facto recipe repurposing every day? Does plagiarism ever come up here?

It did for Robin Wickens, chef at Interlude in Melbourne, Australia. His restaurant features cutting-edge culinary creations that have won him attention worldwide.

Maybe too much attention. Here’s how food writer Steven Shaw described what happened in Slate.

“A chef in New York named Sam Mason saw several photographs of dishes at Interlude and noticed striking similarities to dishes at WD-50 in New York, and Minibar in Washington, DC. Other eGullet members soon noticed parallels to dishes at Alinea in Chicago.

“Interlude’s dishes were not just inspired by WD-50, Minibar and Alinea,” Shaw continues. “They were carbon copies, right down to their arrangements on the plate and, in a couple of cases, the use of identical, specially ordered serving pieces.”

Whoops. Chef Wickens’ culinary reputation took a serious hit, but that’s how it works in the restaurant world. Peer pressure—what academic researchers describe as “norms-based intellectual property systems”—is how the industry polices its own.

A pair of university researchers undertook a study to examine how this loose-knit system works. Emmanuelle Fauchart, of the Conservatoire des Arts et Metiers in Paris, and Eric Von Hippel, of MIT’s Sloan School of Management, worked with a group of prominent French chefs to document the existence of a norms-based intellectual property system in the culinary profession.

If there is a court of public opinion in the food world, these guys constitute the Supreme Court.

The three social norms were these:

Well and good. What happens to those who don’t abide by these norms? Said one chef-participant, “If another chef copies a recipe exactly we are very furious; we will not talk to this chef anymore, and we won’t communicate information to him in the future.”

Shunning within a profession is one thing, but you’d think that a serious charge of plagiarism would be the kiss of death for a book. That wasn’t the case for Seinfeld. Her comedian-husband went onto the David Letterman show to promote his new “Bee Movie,” but spent most of his time cracking wise with Dave about how silly the charge of “vegetable plagiarism” really was as regards his wife’s cookbook. The result: Deceptively Delicious, a book about how to hide vegetables in kids’ food, became the country’s No. 1 best-seller the following week.

That might be how it works in the cookbook publishing industry, especially if Jerry Seinfeld is your main squeeze. But you might want to think twice before passing off someone else’s work as your own in the restaurant world. Whether it’s your peers or someone else out there on the Internet, scrutiny has never been higher. Good luck getting that next job if you get caught.