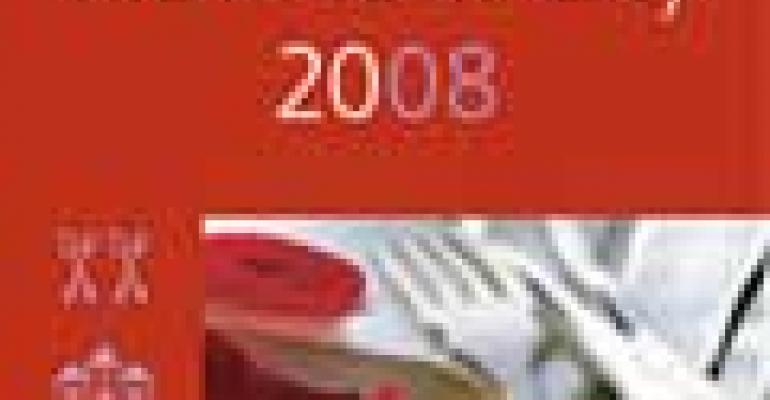 BATTLE OF THE FOODIE BIBLES: MICHELIN VS. ZAGAT

Powerhouse European guide publisher Michelin made its U.S. debut in 2005 with its inaugural ranking of New York City restaurants, adding a San Francisco edition last year. This November, it will unveil two additional guides, covering Los Angeles and Las Vegas. Zagat publishes guides that cover 85 major markets, a collective trove of information that also appears on its website (www.zagat.com). Michelin rankings are based upon the experiences its small team of professional inspectors have when they visit restaurants; Zagat relies on submissions from 300,000 unpaid volunteers, whose opinions are compiled and distilled by the company’s editors.

The first two years were a feeling-out process for these dueling publishers as they went head-to-head in New York City, far and away the guide book industry’s most lucrative market. Last week’s release of the 2008 New York City guides saw Michelin sticking to its guns, while Zagat made a number of physical changes.

The big news coming from the Michelin rankings was the awarding of two stars to Gordon Ramsay at the London, one of just six New York restaurants to receive two stars (the others: Bouley, Daniel, Del Posto, Masa and the reinvigorated Picholine). Ramsay’s first venture in the U.S., the London had been tabbed a huge disappointment by nearly every critic in New York.

The three New York restaurants previously awarded three Michelin stars—Jean Georges, Le Bernardin and Per Se—maintained their top ranking. There was little change among the 33 one-star honorees. Say what you will about the Michelin star system, the fact is that the chefs and restaurateurs receiving them are thrilled to death when they do, no matter how many accolades they’ve piled up elsewhere. On the downside, it’s a huge blow when a star is removed from an operation, a fate that befell Tom Colicchio’s Craft this year.

Gordon Ramsay at the London made news in the new Zagat New York City Guide as well, where it was named “Top Newcomer,” albeit without being included in the Top 50 for food. But the big news out of Zagat was that the company made plenty of additions and changes to its guide listings, hoping its new format would make its product more user-friendly. Zagat—it’s dropping the word “Survey” from its formal title—also unleashed full-court-press publicity blitz, which included an op-ed in the Wall Street Journal in which company owners Tim and Nina Zagat held forth on the state of the New York dining market.

Here’s how the Zagats describe the current scene:

“The New York restaurant industry is riding a bull market, fueled in part by the rise of the “brand name” chef—call it chef culture. Even as restaurant rents hit the $75,000-a-month stratosphere, these top chefs and their partners are opening new venues all over town. With the new trend toward less formal dining, they may not be shelling out as much for expensive china and crystal stemware, but their costs are high: They want to cook with the best organic or seasonal ingredients, hire cutting-edge designers for eye-grabbing decor, and nab a spot in the hottest neighborhoods.”

Wow, up only three cents? New Yorkers must be loving the restaurant scene these days. Well, they love parts of it. On the Zagat scale of 1-30, with 30 being the highest, survey respondents gave New York City restaurants a score of 27 for choice/diversity and a 24 for creativity. But table availability scored a lowly 13, and hospitality earned a mediocre 15 rating. No wonder. Half of survey recipients pegged service as the most irritating part of the dining experience, 34 percent said it was noise/crowds and only 11 percent had an issue with prices. Which is to say New Yorkers love what’s going on in the back of the house, but have big issues with what’s happening out front.

Other factoids from this year’s survey:

As is true with Michelin stars, earning a top ranking from Zagat is still a big deal, and one that will likely translate to increased business for the restaurant that gets one. While the guides themselves may suffer from diminished relevance in the age of the Internet, their promotional value to restaurants has not.