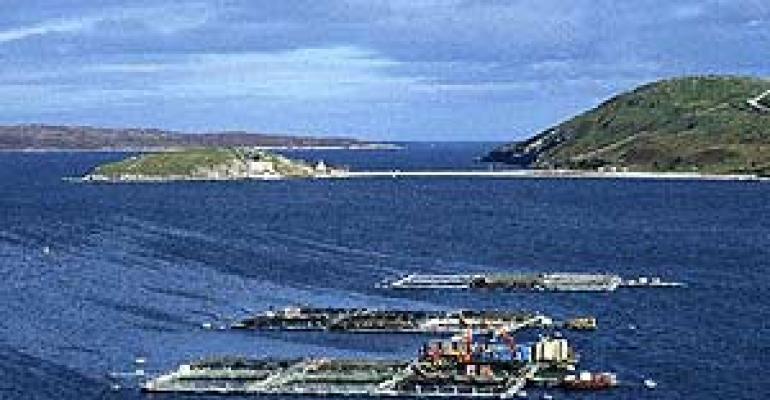 THE OPEN OCEAN: A NEW HORIZON FOR AQUACULTURE

U.S. Commerce Sec. Carlos Gutierrez announced the proposal at the Boston International Seafood Show earlier this week. It comes in the form of proposed federal legislation that would allow seafood farming in federal waters. Right now, the saltwater component of the $1 billion U.S. aquaculture industry takes place within three miles of the U.S. coastline, where it is governed by the laws of individual states. The new law would allow fish farms to be put in place in federal waters that extend beyond the three-mile limit out to 200 miles offshore. There companies could do business without regard to the myriad restrictions on fish size, season and harvest methods that govern how commercial fishermen harvest wild-caught fish in these same waters. In theory, domestic supplies of shellfish, salmon and saltwater species would rise dramatically.

"Because we don’t encourage aquaculture in federal waters, we’re letting technology, investment and jobs go overseas," Gutierrez said. "This bill will provide a federal aquaculture framework that meets the long-term needs of the seafood industry and the growing demand of U.S. consumers."

Right now, the U.S accounts for just one percent of the world’s $70 billion aquaculture industry. Major freshwater species include trout, catfish and tilapia, while near-shore ocean farming produces mussels, clams, oysters, shrimp and salmon. The primary saltwater species which would be farmed under the Bush proposal would include halibut, cod, some species of tuna and perhaps swordfish.

Sustainability of the seafood supply is a huge concern for many restaurant operators. What does this government proposal have to say about it?

A statement released by the National Oceanic & Atmospheric Administration, the U.S. Dept. of Commerce agency that governs fisheries, puts it this way. "America’s wild fish stocks are rebuilding to sustainable populations, and the nation has committed to stop overfishing by 2010. However, even fully restored wild fish stocks will not be able to fill the growing demand for seafood. Nutritionists, medical researchers and government agencies have encouraged increased consumption of fish and shellfish for its wide range of scientifically documented health benefits," the statement argues.

In other words, if you want a secure domestic supply of the seafood items your customers favor, you’d better get behind this bill, officially known as the National Offshore Aquaculture Act of 2007. NOAA estimates that 70 percent of the seafood consumed in the U.S. comes from overseas, roughly half of it farm-raised.

So this bill should sail right through Congress, right? Not if environmentalists have their way.

One is that fish farms release antibiotics, pesticides and other chemicals into the water via fish waste. Three years ago, the Environmental Protection Agency began to monitor the wastewater discharges that flow from about 200 U.S. fish farms into U.S. waterways.

A second is that the protein-rich fish meal fed to farmed fish comes from wild-caught fish. In turn, those species become overfished. "We are using the wild fish to grind up to feed the farmed fish," says Charles Clover author of "The End of the Line," a book about fishing issues.

The third is that aquacultured fish catch diseases. If they escape into the open ocean and mingle with wild stocks, those diseases may spread unchecked. Even if no diseases are spread, genetic problems may ensue.

Problems on all these fronts have occurred multiple times in countries around the globe already, despite stringent fish-farming practices meant to negate them. Which may be why this proposed new bill would enable individual states to ban fish farming up to 12 miles off their particular coasts. This move would still leave plenty of room for aquaculture interests to ply their trade, while accommodating the not-in-my-backyard objections of the individual states and the commercial fishing operations centered there.

Even that may not be enough for some who oppose this issue. "The push is to go farther offshore so that there’s not any kind of monitoring of impacts," says one advocate. That’s why several groups want to see environmental impact statements of open ocean aquaculture operations before Congress considers this new law.

But if environmental assessments give a green light to open ocean aquaculture, look for this bill to fly through Congress. And then you should be able to breath easier about the long-term supply and the cost of your most popular menu items.