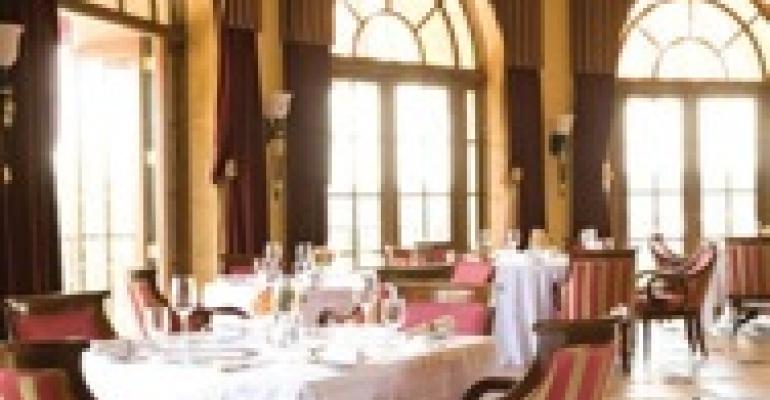 Teeing It Up in San Diego

A great chef-driven restaurant often serves as a catalyst to bring a downtrodden urban neighborhood back to life. One can work equally well as a quick-fix method to inject new energy into a fading hotel property. Recently, developers have found that having one or more hip restaurants locked into their next real estate venture can help convince lenders to greenlight construction loans.

But the arrival of the new Addison at the Grand Del Mar, near San Diego, shows that there's now another way real estate developers can leverage a great chef-driven restaurant: as a cornerstone amenity for a luxury golf resort. Note that we're not talking about a restaurant that has aspirations to become great one day; we mean one that hits the ground running at this level, providing food and design rarely, if ever, seen in this type of setting.

Which must have made the chef search tricky for Grand Del Mar owner Manchester Resorts. After all, whoever took the job would be cooking at a place that shared space in a 50,000-sq.-ft. golf course clubhouse with a pro shop and the locker rooms. Luckily for them, the Manchester people found William Bradley. The 31-year-old chef had already won national acclaim, earning it while working at a somewhat similar type of property.

Bradley previously was executive chef at Vu, a restaurant at the Hyatt Regency Scottsdale Resort & Spa. Vu piled up honors in a hurry, being named one of Esquire's "Best New Restaurants" in 2005 and receiving a Mobil Four Star Award and an AAA Four Diamond Award winner in 2006.

Prior to that, Bradley had spent three years as sous chef to James Boyce at Mary Elaine's at the Phoenician in Scottsdale. Even though he had it rolling in Arizona, Bradley, a native San Diegan, jumped at the chance to return home to open the Addison.

It's a good thing for the Manchester people that he did. That's because Bradley is one of the few chefs to have proven he can create culinary excitement no matter the location. It's something that's relatively easy to do if you're a chef in New York City or Chicago, where others have gone before you. But it's a real challenge when you have to create a location's entire dining vibe pretty much by yourself.

Bradley describes his Addison menu as Europeaninfluenced with Mediterranean touches, one that offers "explosive flavors." That menu is audaciously brief, offering but 10 selections a night. Dishes are labeled with simple one-word designations‚ i.e., "Prawns," followed by a no-frills listing of companion ingredients (for the prawns, a starter course that goes for $16, it's "white nectarines, lemon-lime jam and sweet garlic confit.")

Main courses like Braised Beef Short Ribs or Bass (the latter served with a bacon-lobster fricassee, arugula and preserved lemon) are priced in the $35 range. The six-course tasting menu goes for $95, $160 if paired with wine, with the wine being chosen by sommelier Jesse Rodriguez, formerly of The French Laundry and Per Se. Desserts come from Jack Fisher, a San Diego pastry legend.

The "Addison" in the restaurant's name refers to Addison Mizner, the legend who's responsible for dozens of landmark buildings and residences in South Florida. If you've ever been to Palm Beach or Boca Raton and wondered who came up with all that exotic Spanish revival architecture, Mizner's the guy.

The interior of the 90-seat, 6,000-sq.-ft. Addison pays homage to him in grand style. Guests feel like they are sitting in one of the classic estate mansions Mizner created in South Florida.

It's a good thing they do, because the resort's developers have a lot riding on this project. Their goal is to turn the existing Tom Fazio-designed golf course they bought into a destination resort.

They're certainly in the right neighborhood. The Grand Del Mar sits in the Carmel Valley north of San Diego, nearby communities being La Jolla, Del Mar and Rancho Santa Fe. When finished, it will have 261 guest rooms and 39 wholly or partially owned "villas."

The new developers wanted a restaurant that would attract guests who might stick around for a night in the hotel and a round of golf, decide to host a corporate meeting there or perhaps spring for a villa.

When they've got an attention-getting restaurant like the one Bradley gave them, they've got a big leg up on meeting those goals. Keep this in mind the next time you negotiate a lease or shop for a site for your next venture. They may need you more than you need them.