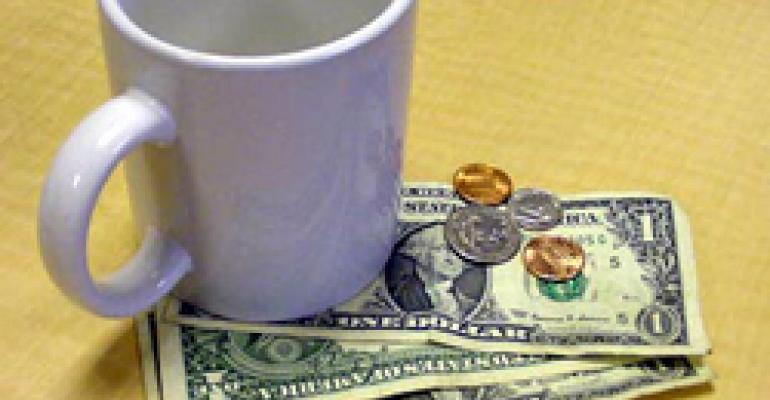 WHO SAYS THERE ARE NO GUARANTEES IN LIFE?

Everyone agrees that full-service restaurants would be better off if their waitstaffers would adopt a more European attitude toward their job-an honorable profession and a worthy career. It's no wonder they do. Many European restaurants tack a service charge onto the bill (in France, service compris; in Italy: servizio incluso) so the waiter or waitress gets a guaranteed return.

It's typically different in the U.S. where, large parties aside, a server's compensation is at risk with every transaction at every table on every night. Understandably, U.S. waitstaffers see their job as a short-term cash generator to be endured until something better comes along. Over time, even those who make good money often develop a lingering resentment toward what they do for a living.

Some even look for revenge. Go to www.bitterwaitress.com and check out the site's ever-expanding database of bad tippers. It's a list of high-profile restaurant guests who left minuscule tips for, or who stiffed outright, their waiter or waitress. The details are all there: the size of the check, how many guests were in the party, who paid the tab and how big a tip he or she left. Plus there's a link to the details of the occasion. It's a big-time payback opportunity for servers who feel disrespected and, boy, do they take advantage of it.

Who's getting called out? Everyone from world's richest man, Bill Gates ($6 tip on a $412 check), to Mike Tyson ($10 on a $300 check) to John Kerry (with 11 instances, he's looking like a serial bad tipper) to dozens of other high-profile names and hundreds of lesser lights. Of course, submissions are anonymous and we're only hearing one side of the story. But there's no discounting the large number of servers who are moved to seek revenge.

The bitterwaitress.com site suggests naming names whenever a tip is less than 17 percent. Other sites rip on those who tip less than 20 percent, including www.waiterrant.net, although you have to search through blog entries there to ferret out the scoundrels. The www.stainedapron.com site divides customers into the "the saints" and "the scum," then provides some backstories to their list.

But the site getting the most attention lately is www.fairtip.org. This one skips the whining, the gossip and the naming-names angle to instead focus on the logical arguments for imposing a universal 20 percent service fee at full-service restaurants. Its purpose: "Fairtip.org will educate and promote a plan of incentives directed at achieving higher compensation for food and beverage servers through gratuities." Its primary argument: Service will become more professional, and server turnover will be drastically reduced, when a flat service charge is imposed. The group's founder is Yakup Ulutas, a restaurant manager in Atlanta.

Sound crazy? It's not much of a leap. If you add up all the average tip percentages reported by the various Zagat Guides, you'll find that customers already kick in 18.7 percent in mid- to upper-tier full service restaurants. New York's top-rated Per Se instituted a 20 percent service fee last year and, at least at its rarified level, there have been no complaints. Some customers tip on top of that.

So what will you say if some of your waitstaffers bring this subject up? We suggest you start the debate by quoting an editorial that recently appeared in the Chicago Tribune. "In general, customers don't want automatic service charges," the paper concludes. "It strips the server of the motivations to do a good job if he or she is going to be paid the same anyway." We're sure a discussion will develop from there.