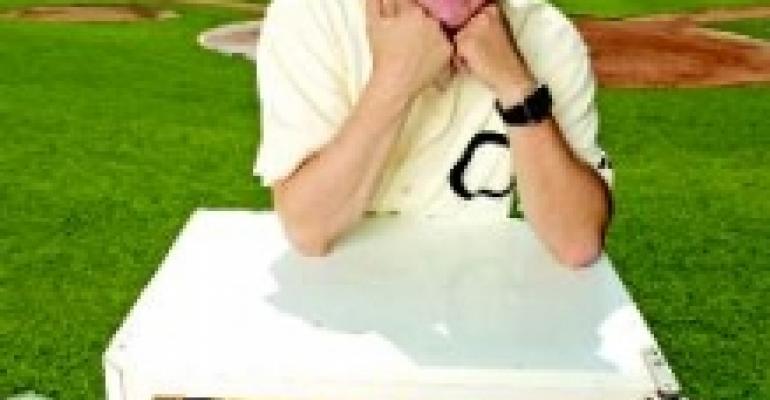 He's spent his entire life in the Midwest, yet Chicago native Todd Stein has incorporated international influences into his cuisine wherever his career has taken him. After graduating from Kendall Culinary College and apprenticing at Chicago's legendary Gordon Restaurant, he worked in France at Moulin de la Vierge. Then he returned to Chicago to open some of that city's finest restaurants—mk, Spruce and the Hudson Club. Next he headed for Cleveland, where he developed and opened three of that town's hottest spots: Piccolo Mondo, Sans Souci and Vivo. When mk chef/owner Michael Kornick asked him to return to Chicago to be mk's executive chef, Stein jumped at the chance.

Nice fridge. So what time does batting practice start?
We're at US Cellular Field, home of the Chicago White Sox. In this town, you root for either the Cubs or the Sox.

Stuck? They're the reigning World Series champs. How bad can it be?

The Series win was sweet, particularly if you've been here through all the losing years, like I have.

We like your throwback jersey.
It's what they wore in 1906. Last year was the first Series win for the Sox since 1917.

You'd better get rid of that big lobe of foie gras soon.
I will. The Chicago foie gras ban goes into effect tomorrow. We'll sell all this at mk tonight.

What has the foie gras ban meant for the restaurant?
We've sold two or three times as much of it since the ban was announced. For the last month, we've featured an all-foie-gras tasting menu.

So the ban will hurt revenue?
Yes, but taking in a little less money isn't the real problem.

What is?
Chicago is one of the great restaurant cities, and I see the foie gras ban as reducing our prominence in the food world.

Point taken. At least you'll have this nice-looking prosciutto to work with.
Yes. It's from Iowa, and it's as good as any Italian import.

Who makes it?
It's the La Quercia Americana brand. They use organically fed Berkshire hogs.

Are these heirloom tomatoes local, too?
They're from Nichols Farm in Marengo, IL. I serve them at home and at the restaurant.

Sounds delicious.
I made it just this past weekend for myself and my girlfriend, Aubrey.

You two entertain much?
We do. She's an event planner, so she sets the room and I do the cooking.

Nice. What do you serve your guests?
Good question. We recently moved downtown into a 7th floor loft. We can't grill now like we did at the old house.

How do you get around that?
Now it's lots of roasting: rack of lamb, leg of lamb, whole chicken. The other night I made a roasted pork tenderloin and a panzanella salad topped with a poached egg.

Boy, you do eat well here.
We do. I've always thought that if you're a chef you should make an effort at home.

So after tomorrow you'll have to smuggle in the foie gras, no?
It's a touchy subject, for a number of reasons. There may be some legal action, maybe a temporary restraining order.

What's the plan?
Well...don't count foie gras out in Chicago yet.

We won't. Nor the White Sox, either!