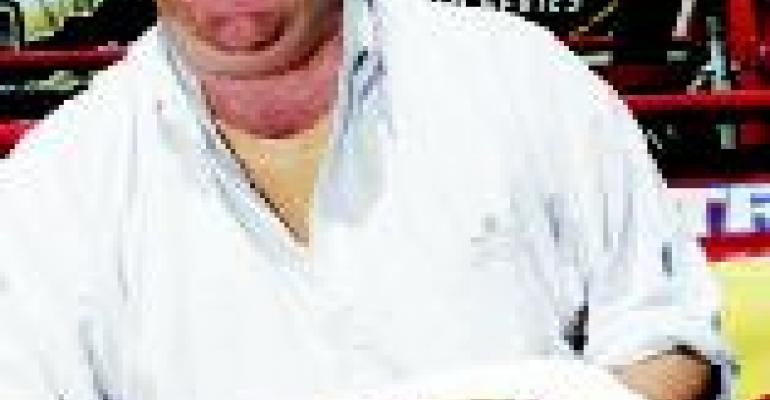 For an Iron Chef, Some Gold

Many chefs still dream of opening that perfect little restaurant of their own so they can finally call all the shots. And it's a worthy goal, to be sure. But why not aim a lot higher? As their inclusion on the annual list of the country's 100 most powerful celebrities compiled by Forbes magazine demonstrates, chefs can now achieve fame and fortune just as easily as movie stars, pro athletes, rock musicians and other high-profile personalities do.

Forbes compiles its rankings by combining an individual's earnings with these other metrics: Web mentions on Google; press clips compiled on Lexis-Nexis; TV/radio mentions by Factiva; and the number of times a celebrity's face appeared on the cover of 26 major consumer magazines. See the full list at www.forbes.com/2006/06/12/06

On the earnings front among chefs, Wolfgang Puck leads the way (No. 72 on the list at $16 million) followed by Emeril Lagasse (No. 84 at $10 million). But in Forbes'

"power ranking" standings, both trail omnipresent Food Network personality Rachel Ray, whom Forbes somehow classifies as a chef. Ray finished in the No. 96 spot for earnings, with $6 million, but exposure from her new talk show and magazine propelled her to the No. 81 spot in the power rankings.

New to the list in 2006 is Mario Batali, who finished in the No. 97 spot for both star power and, on the money list, earning an estimated $5 million.

Batali certainly has a wide range. It can be argued that he is partly responsible for this summer's footwear fashion fad, Crocs, the eye-catching bright orange version of which he wears everywhere (even though he has no commercial relationship with the shoe's maker). Plus he's got restaurants: Po, Babbo, Del Posto, Lupa, Esca, Casa Mono, Bar Jamon, Bistro du Vent and Otto Enoteca, all in New York City. Each of these restaurants features a different style of food; collectively, they feed 2,500 patrons each night. Batali soon will have two restaurants in the Venetian in Las Vegas, modeled on Babbo and Lupa.

One called Mozza in Los Angeles could be added to this list soon. And he's such a big deal that Bill Buford quit his job as fiction editor of the New Yorker to write Heat, a book about what it's like to work in Batali's kitchens. It's a best-seller. And the Food Flippin' Mario wind-up doll makes him the first chef to have his own action figure. Other chefs have built empires before, but Batali's doing it a different way. For one thing, he and partner Joe Bastianich own their restaurants outright—keep this in mind if you want to have an empire, too. For another, he puts his reputation on the line very publicly on "Iron Chef America."

Say what you want about the guy, he demonstrates on this show that he can really cook. Many credit the Food Network for convincing so many kids to skip college and head straight into culinary school. We bet those kids want to be like Mario, not Rachel Ray.