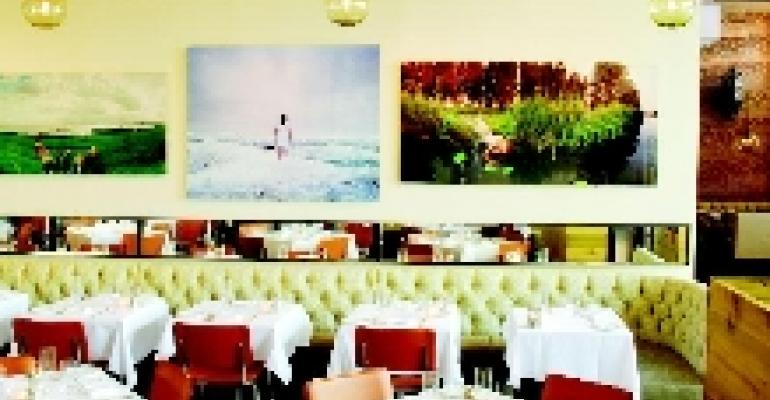 Give the partners in Drew Nieporent's Myriad Restaurant Group (MRG) high marks for the job they did at Proof on Main in Louisville. This much-anticipated restaurant opened early last month and immediately seemed to be an ingrained part of this Mid-South city's culinary world. The concept's careful attention to local tastes and customs, coupled with Myriad's formula of fine food and pretension-free service, helped the place fit right in.

Separately, MRG's consulting arm conceptualizes, designs and opens restaurants, typically doing so at trophy properties of big hotel chains like Marriott and Starwood. MRG also provides hands-on management for restaurants (and sometimes the entire food & beverage departments) of other hotel chain clients. It usually steers clear of secondary markets like Louisville, particularly when the prospective client has but one hotel.

But this was no ordinary hotel, and no ordinary client. Proof on Main is located in the 21C (you're reading that right) Historic Hotel and Museum, situated adjacent to downtown Louisville's business core and its arts district. The 21C is a wired-for-WiFi, 450-thread-count sheet kind of property. But its 90 amenity-laden rooms also sport 42-inch flat-panel TVs, original works of art and sterling silver mint julep cups.

21C's atrium houses a 5,000 sq. ft. contemporary art museum. The 80-piece permanent collection features pieces by important American and international artists. It's billed as the first museum devoted solely to collecting and exhibiting living artists of the 21st century. It's not a place where any old restaurant would do.

What's with all the art? It's a passion of owners, contemporary art aficionados and local philanthropists Steve Wilson and Laura Lee Brown (as in Brown-Forman distillers).-Their hotel consists of five late-nineteenth century buildings—each on the National Register of Historic Places—linked together. Proof sits on the building's corner. There's no other complex like this in the country.

Given this setup, you'd think the Myriad partners would have come up with a restaurant that offered a prototypical urban feel: A sleek design with art-laden walls, hipper-than-thou waiters dressed in all-black outfits, an edgy menu perhaps created by an absentee celebrity chef and price points that reached into Louisville's version of the stratosphere. In short, they must have been tempted to create a concept they knew could appeal to the downtown New York art world that surrounds Myriad's headquarters in TriBeCa, shoehorn it into this restored space in Kentucky and price the experience accordingly.

Such an approach probably would have worked...at least for a while. But that's not the route Myriad took. They're too smart. Instead, they structured Proof on Main to be a Kentucky-centric restaurant that's accessible, relaxed and, relatively speaking, affordable.

The restaurant's food is billed as "modern American cuisine with Tuscan influences," which translates to lots of sustainable local ingredients done up with a light Italian touch. Menu prices are $6 to $10 for appetizers, $13 to $26 for entrees and $6-$10 for desserts.

The chef is Michael Paley, who wowed them in South Florida at Myriad-managed Mediterranean standout Lucca at the Boca Raton Resort. For Proof on Main, he went on a fourmonth tour of the region's small farms, turning up an admirable number of artisan suppliers whose wares he showcases on the restaurant's menu.

The 100-seat dining room is bright and handsome, but relies on many neutral tones and textures. How come? Its purpose is to make the guests feel comfortable. The striking contemporary art on the walls makes the design statement in this place.

One big departure from the Myriad norm at Proof on Main involves the wine list. At most Myriad operations, especially those it owns, wine is huge. Overall, the firm has won dozens of Wine Spectator awards.

21C's wine list is a dandy, too, but it's not the main focus of the beverage program. Signature cocktails and a collection of 45 types of bourbons are. Myriad is nationally famous for its ability to rev up a bar scene and keep it going until late at night. In Kentucky, you need bourbon to do that.

So what's it been like to come into town as an outsider and open a restaurant of this caliber? In a word, rewarding.

"The level of quality of both food and service in the restaurants in Louisville gave us the confidence that there is both the talent in terms of the quality of staff and the customer base to support it," Myriad partner-in-charge Michael Bonadies told Louisville's Business First newspaper. "It blows away every other secondary market we've done work with."

For their part, Louisville diners seem pretty blown away by Myriad's work themselves.