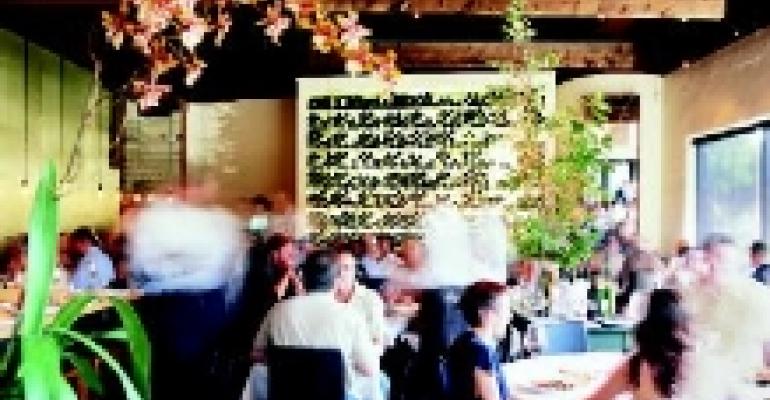 You have to factor in the degree of difficulty as you ponder what Frasca Food and Wine has achieved during its first year-and-one-half of operation in Boulder, CO, because it sure didn't sound promising going in.

Think about it: Two guys from out of town show up to open a restaurant on bustling Pearl Street, where Boulder already has a lineup of cool restaurants disproportionate to its modest (pop. 95,000) size. Further, the newcomers expect locals to fork over as much as $28 for entrees that pay homage to the cuisine of Friuli-Venezia Giulia. Boulder is a cosmopolitan town. But even the geography majors at the University of Colorado probably couldn't find Friuli-Venezia Giulia on a map. How big could the market for expensive food from an obscure region of Northern Italy really be?

As it turns out, if the two guys doing this are French Laundry alums Bobby Stuckey and Lachlan Mackinnon-Patterson, the market is huge. So many people want to eat at Frasca today that its 17 tables are booked a month in advance. Judging from critical reaction to the place, the pair have created a dining experience that even jaded restaurant reviewers find transcendent.

Here's what Denver Post dining critic Kyle Wagner had to say. "From now on, my life will be divided into two time periods: before I ate at Frasca and after I ate at Frasca. And other restaurants should be on notice. After 14 years of reviewing, some might call me a little cranky. But before Frasca, I was willing to settle. Now, after Frasca, we'd all be crazy to."

Equally moved was Westword magazine reviewer Jason Sheehan. "The food at Frasca is so good that to parse a meal into a discussion of its disparate parts almost cheapens the experience of dining here," he writes. "Frasca's excellence is inherent in everything it does, and even for someone as arrogant, opinionated and cultish about his favorites as I am, there's no sense in passing judgment. For once, I'm silenced by my pure, unadulterated joy at eating."

No wonder Frasca finds itself in the enviable position of turning customers away on many nights. It's quite a scene. The place is usually booked well in advance. Yet that doesn't deter a nonstop flow of dropins, who hope to score one of the spots held for walkins: six seats at the wine bar, four at the salumi bar or a pair of two-tops in the dining room.

But the constant swarm doesn't detract from the warm, customer-centric experience the 36-year-old Stuckey has conjured up for Frasca. A straight-up reading of his background—he's a certified Master Sommelier who won a Beard Award for his wine work while at Thomas Keller's The French Laundry in Yountville, CA—sounds impressive enough. But it doesn't tell the whole story. He's a front-of-the-house whiz who's as good at overseeing a waitstaff and creating a welcoming vibe as he is at selling wine. " Master Sommelier" means the guy passed some really hard tests about wine and knows the letter of the law. Stuckey also embodies wine's spirit, and knows how to impart it to guests.

Guests get a taste of that spirit just after they are seated, when they are served a complimentary tajut of Tocai Friulano, a 3 oz. glass of wine to sip while they ponder the menu. Then Stuckey swoops in to help with pairings from the 37-page wine list, no bottle of which costs more than $20 over retail. He'll set guests up with something from the dandy wine-bythe-glass list, too.

Then comes the food.

Stuckey was the high-profile partner when Frasca first got going, but Mackinnon-Patterson is the rising star now. He's a Colorado native who got his start in foodservice making bagels at a Bruegger's in Fort Collins. Later, he studied cooking at the Ecole Gregoire-Ferrandi in Paris, then worked at Michelin-starred restaurants in France. He joined The French Laundry in 2001 as chef de partie and worked there two years.

Mackinnon-Patterson moved moved back to Colorado in 2003 to get the ball rolling on Frasca, which turned out to be a year-long project.

We're not sure how to classify Mackinnon-Patterson's food, except to say that it manages to be simultaneously rustic and elegant. It's Northern Italian, albeit from a part of Northern Italy not widely known for its food. It features the finest of local farm-raised and artisan ingredients and it reflects the seasons. It's imaginative enough that Food and Wine named Mackinnon-Patterson a 2005 "Chef of the Year."

As noted above, critics who eat Frasca's food seem to have a near-religious experience. Signature items so far include a $15 salumi antipasti platter featuring prosciutto di San Daniele, served with grissini and rafano; a house-made ricotta cheese first course that's paired with Bartlett pear jam and toasted pistachios ($10); and handshaped agnolotti with spicy pork carbonara and oregano ($17). A rack of veal for two, at $70, is the priciest item.

Perhaps the lone problem Stuckey and Mackinnon-Patterson face now is the challenge of keeping all this momentum going. Toward that end, the pair

underwrote a 10-day " immersion" jaunt this July to Friuli for 20 staff members. People who were already evoking the spirit of Friuli can do an even better job of it now that they've all been there..

Now that they've conquered Boulder, do the boys have a plan to expand? If they do, they're not saying. "We'd like to be the No. 1 neighborhood restaurant in the world." Stuckey says. It's a goal that appears to be in reach.