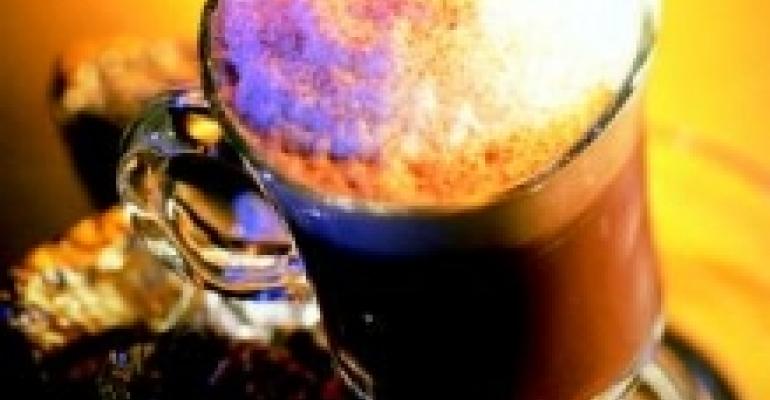 Hot cocoa may well be the bar’s magic bullet. It’s a classic American beverage¯warm, satisfying and universally appealing. Hot cocoa is a main component of any alcohol-free program, as well as an ideal vehicle for delivering spirits and liqueurs. Best of all, it’s made from chocolate. No, wait: The best thing is that hot cocoa is loaded with profit potential. Its origins go far beyond Bosco or Ovaltine. In fact, cocoa beans were so revered by the Aztecs that they were used as money. The royalty and priests drank a warm concoction made of crushed cocoa beans and water called choclatl. The Emperor Montezuma served Cortez and the Conquistadors choclatl in golden goblets when the Spaniards arrived in 1519.

Upon returning to Spain, Cortez introduced King Charles V and his Royal Court to sweetened hot cocoa, and not surprisingly, it became the rage of the aristocracy. For more than a century, cocoa remained the domain of the wealthy and privileged. By the early 19th century, however, steam-operated grinding machines caused prices to drop dramatically. The innovation greatly improved the flavor of cocoa and led to large-scale manufacturing.

Creating classics:
One of the great features of making a cup of cocoa is that it doesn’t require specialized equipment or training. Although there are many ways to make hot cocoa, the following is a typical scratch recipe. In a saucepan over low flame, whisk together 1/2 cup cocoa powder, 1/3 cup sugar and 1/2 cup water. After the powder and sugar go into solution, stir in another 1/2 cup of water and a cup of milk. Keep stirring over low to moderate heat for approximately 10 minutes, stirring from the bottom of the saucepan at a low temperature to prevent scalding. Once the mixture is hot, removethe pan from the burner and allow to cool.

Variations on this theme call for the addition of vanilla extract, cloves, cinnamon, lemon juice, instant espresso powder or mint chocolate chips for flavor. Cornstarch or arrowroot can be added for thickening. Substituting brown sugar for regular granulated sugar is another creative option.

There there’s the Mayan hot cocoa recipe made famous in the movie “Chocolat.” It is made with milk, pure cocoa, unbleached flour, dark brown sugar, powdered sugar, vanilla, grated nutmeg, cloves, crumbled cinnamon and chili pepper. The drink is spicy, robust and highly aromatic. It’s likely the most exotic version of hot cocoa, but may also be the most captivating.

Creating great alcohol-free specialties with hot cocoa involves the least amount of creative genius, and has the highest likelihood of generating a standing ovation. To illustrate the point, start with a 3/4 cup full of hot cocoa. At this point, the drink is almost begging for an added blast of flavor. It could be a splash of hot fudge or chocolate, caramel, and white chocolate syrups.

After the identity of the cocoa base has been altered, it’s time to drop in a scoop of ice cream. Shortly after splash down, the melting ice cream forms a frothy layer on the surface of the cocoa. It’s a fabulous presentation. The coup de grace? There’s a variety of ice cream flavors that work with the satisfying taste of hot cocoa. The list includes banana, chocolate, French vanilla, raspberry, strawberry and Almond Roca®, to name but a few.

Nowhere is it written that you can’t lace hot cocoa with something a wee bit stronger than syrup. What about making a Keoki Coffee using hot cocoa instead of coffee? Hot cocoa drinks are bracing and outrageously delicious.

Have fun, experiment and remember: There’s no such thing as making a mistake with hot cocoa.