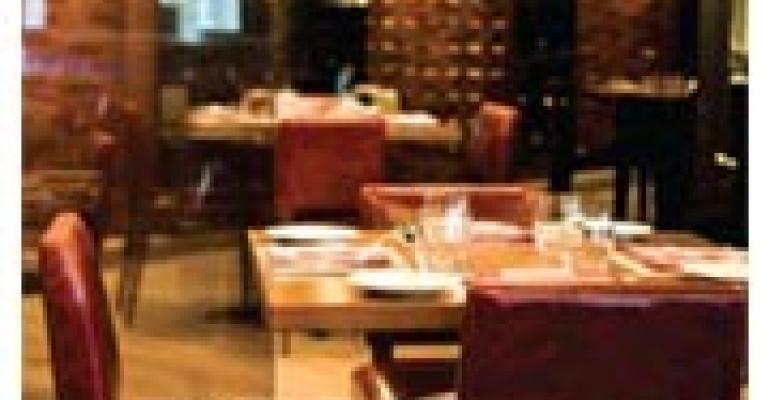 North Of The Border

You've got to hand it to Daniel Boulud, and not just for his legendary cooking talents, either. It's for the skillful way he handles the entrepreneurial aspect of the restaurant business. Boulud's most recent coup: adding an international component to his culinary empire by setting up shop in the foreign city hosting the next Olympic Games. He opened last December, just in time to cash in on both the run-up to the Games and the bonanza likely to accrue to a restaurant during and after it. His primary challenge now: producing Michelin-star caliber food in a restaurant that bears the Boulud name but is located thousands of miles away from his flagship restaurant, Daniel, in New York City.

Hey, wait a minute. Boulud…foreign city…Olympic Games…didn't we just write this story? We did, for the July 31, 2008 edition of the RH enewsletter. But that article was about Maison Boulud in Beijing, China, which opened just prior to the 2008 Summer Olympics. This one is about the DB Bistro Moderne that opened last December in Vancouver, BC, host city for the 2010 Winter Olympics. And it's even more about Lumière, now run by Boulud, but formerly the most celebrated restaurant in Vancouver when headed by Canada's most prominent chef, Rob Feenie.

How did it come to be that Daniel Boulud took over some other guy's restaurant (or actually two restaurants: DB Bistro Moderne occupies the space previously known as Feenie's, the next-door casual offshoot of Lumière)?

Feenie was a huge deal in Canada, with cookbooks, TV shows, his restaurants and even a win on the U.S. Iron Chef television series over Masaharu Morimoto. But he faced financial difficulties after spending $1.2 million to revamp Lumière's kitchen and buy out his original partner. To solve them, he sold a majority interest to investors David and Manjy Sidoo. A falling out caused Feenie to leave.

What a shock for the Sidoos. It was the equivalent of an American investor buying, say, Charlie Trotter's in Chicago, only to have Trotter then quit. What's your investment worth then?

To get back on track, the Sidoos formed a partnership with Boulud and his Dinex management group. Lumière, a prestigious Relais & Chateaux property, continues on with the Sidoos and Boulud as owners. The Sidoos had installed Dale MacKay as executive chef during their dispute with Feenie, and he's keeping that job under the new regime.

It's the same ownership at DB Bistro Moderne, where Boulud veteran Stephane Istel was brought in from New York to be executive chef.

Both restaurants underwent comprehensive renovations before reopening late last year. Lumière remains as Vancouver's top fine dining destination. MacKay, a native of Saskatoon, Saskatchewan, cooked in a number of Gordon Ramsay's restaurants around the world before joining Lumière, and his offerings are presented in a series of tasting menus on a prix fixe menu that starts at $95.

DB Bistro Moderne touts Istel's menu as “contemporary French bistro cuisine with a Canadian accent.” Lunch is offered at a $28 prix fixe, with a la carte appetizers priced at $9-14 and entrees in the $14-25 range. The prix fixe menu at dinner is $36, with appetizers going for $12-19 and entrees $21-35.

For his part, Feenie's still cooking in Vancouver, and says he harbors no hard feelings about the way things worked out. In fact, he's flattered that his former investors felt they had to bring in someone of Boulud's caliber to replace him. “Do you think he came cheap?” Feenie told the Globe and Mail. “If this is the only way they can replace me, that's great.”

It's certainly great for Boulud, who's showing other chefs how to expand their reach as owners, not just as absentee chefs. He's a hit in Vancouver (“Lumière's in a league of its own,” says the Globe and Mail) and has already moved on to his next project, the casual DBGB on New York's Lower East Side. It will be his 10th restaurant and fifth in New York.