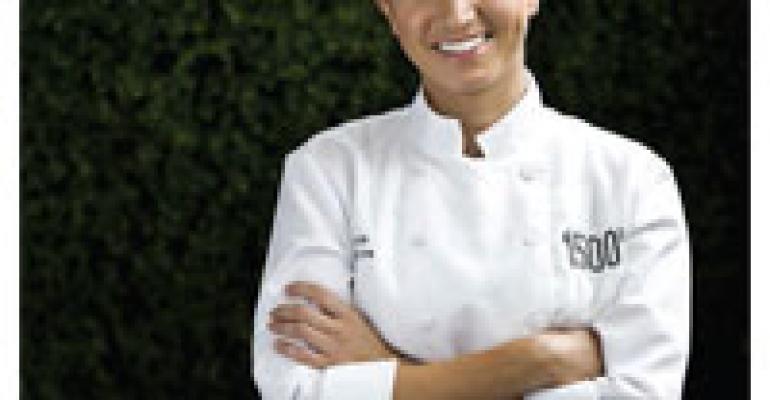 The Eden Roc Renaissance Miami Beach has led a parallel existence with its next-door neighbor, the legendary Fontainebleau Miami Beach. Both resorts opened in the 1950s and had long runs as swank celebrity haunts. Both fell out of favor when the South Beach scene began to explode three miles down the road during the 1990s, and both have undergone big-budget renovations ($220 million for Eden Roc, $1 billion for the Fontainebleau) over the past couple of years. But they took different paths when it came time to select signature restaurants that would reflect their new style.

The Fontainebleau went with concepts headed by out-of-town celebrity chefs: Alfred Portale's Gotham Steak and Scott Conant's Italian spot, Scarpetta. The Eden Roc came up with something a little more approachable and contemporary: a farm-to-table steakhouse dubbed 1500°. The restaurant's executive chef is Paula DaSilva who, unlike Portale and Conant, is hands-on in her Miami Beach kitchen.

Can't place DaSilva? She's one of the rare contestants to run the gauntlet of Gordon Ramsay's Hell's Kitchen TV show and come out the better for it. DaSilva didn't win it all — she was runner-up on Season Five — but the 31-year-old showed enough moxie to merit the 1500° gig. Her lengthy stint as chef de cuisine at Dean James Max's 3030 Ocean in Fort Lauderdale demonstrated she had the cooking chops, and her TV exposure added a celebrity factor that lent the restaurant a bit of cachet.

So how does DaSilva interject a farm-to-table sensibility into the traditional steakhouse format? “We will definitely use local product as much as possible but won't get bogged down in pedigree,” she said just prior to last October's opening. “Freshness and seasonality will be the key.”

The 160-seat (with 40 more on the patio) restaurant's name — chosen for the broiler temperature at which its steaks are cooked — gives customers a limited set of expectations, but the menu is much broader than they might imagine.

The chef's five-course tasting menu goes for $85, $115 with wine. Light eaters can opt for the three-course prix-fixe consisting of a Caesar-esque hearts of romaine salad; a half rotisserie chicken served with Carolina rice, chorizo, black bean puree and mustard greens; and a Valrhona molten chocolate cake paired with Tahitian vanilla ice cream. It costs $35, $45 when accompanied by three wines.

There are steaks, of course. The eight options range from a 10-oz. top sirloin ($25) to a 34-oz. prime porterhouse for two that goes for $94. But they account for just a small fraction of the menu. Seven specialty entrees lean heavily toward seafood (whole fried yellowtail snapper is $25; grilled black grouper goes for $29) and there's even a $20 local farmer's delight made up of seasonal vegetables and specialty grains. Fifteen signature sides, priced at either $8 or $11, give customers plenty of tantalizing choices to round out their meal.

The first-course choices are slightly pricier. Lobster bisque goes for $12, as does the tuna tartar. White water clams served with chorizo, peppers and aji Amarillo broth have been a big seller at $15, and a $21 charcuterie plate tops the price list.

If you're looking for a menu that gives patrons a choice of several styles of dining without trying to be everything to everybody, this one might be your model.

“Our goal is to appeal to visitors and locals alike,” DaSilva says. “Whether you're a foodie tourist on a culinary exploration of Miami's best restaurants, or a local looking for an exquisite meal in a gorgeous setting, 1500° will fit the bill.”

The restaurant also serves as Eden Roc's breakfast spot, and the check averages from this daypart should be healthy. The standard breakfast buffet is $18, and the slightly more ornate “big morning breakfast table” is available for $26. A three-egg omelet served with potatoes and bacon costs $16, as does the ropa vieja benedict.

With the Eden Roc's capacity now up to 631 guestrooms thanks to a new 21-story tower that is the centerpiece of its redevelopment, there should be plenty of customers who will stay on-property to sample DaSilva's food. This job may not exactly be heaven, but she's come a long way from Hell's Kitchen.