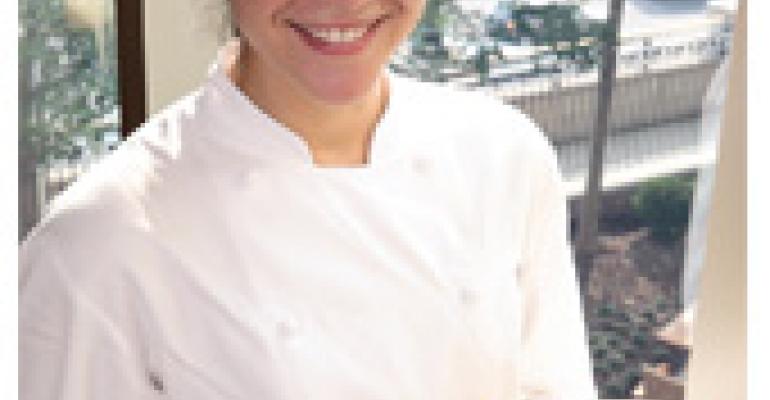 A New Direction, And Then Some

Every big hotel has one: an all-day restaurant meant to supply get-the-job-done meals for those who don't want to spend big at the hotel's fine-dining spot or head off-property to find something cheaper. These operations, modest in menu, design and price point, typically have limited ambitions. Or at least they did until Eric Ziebold got the call to remake the one in the Mandarin Oriental hotel in Washington, DC. Now he and a deeply talented crew are showing what can happen when serious culinary standards are brought to bear on the all-day hotel restaurant concept: the new Sou'Wester, which opened in September.

Ziebold's primary job is executive chef at the Mandarin Oriental's lead restaurant, the much-honored CityZen. But after being named Best Chef Mid-Atlantic in 2008 by James Beard Award voters, the culinary world has been wondering what someone with his prodigious talent would come up with next. Now they know.

Few expected anything like Sou'Wester. “We wanted to do something completely different; a concept that would be new for the city, for our local community and for our hotel guests; I believe Sou'Wester fits the bill on all fronts,” says Ziebold.

Give the guy credit; he found a way to do it. Which is what you'd expect from the ambitious Ziebold, an Iowa native whose impeccable post-Culinary Institute of America resume lists chef de partie jobs at Spago in Los Angeles and Vidalia in Washington and eight years at The French Laundry in Napa Valley, five of them as Thomas Keller's chef de cuisine. He also helped Keller open Per Se in New York City. Ziebold debuted CityZen in 2004.

It's a lot of culinary firepower to unleash on what is basically a no-frills restaurant that starts serving breakfast at 6:30 a.m. (buttermilk pancakes, $12; breakfast buffet, $22) and stays open until 10 p.m.

Day-to-day, Ziebold concentrates on CityZen and leaves Sou'Wester to chef de cuisine Rachael Harriman. She's another Keller alum, having worked at both the French Laundry and Per Se. In between, she was chef de partie at Michelin-starred Helen Darrroze in France and spent time at Maison Blanche, headed by star chefs Jacques and Laurent Pourcel. She became CityZen's sous chef in 2006.

Even sommelier Carlton McCoy has a Keller connection, working his way up from service expediter to dining room staff trainer at Per Se before catching on at CityZen and now Sou'Wester.

So what did this crew come up with at Sou'Wester? It's not the type of Southwestern-style food the restaurant's name might imply. (That name, originally South by Southwest, was switched when the Austin, TX alternative music festival by the same name squawked.) Let's call it Southern- and Chesapeake Bay-influenced cuisine instead.

Ziebold was smart enough to find room on his menu for both traditional takes on some classics and up-to-the-minute re-interpretations of others. Thus patrons can order things like Sauteed Perch with Old Bay Chowder ($20) or Chicken and Dumplings ($17) at lunch, along with assorted soup, salad and sandwich offerings. Dinner options include starters like Poached Egg with Creamed Grits and Sweetbreads ($12), entrees such as Blackened Bluefish with Cajun Rice ($18) and a side-dish lineup ($4-$6) that has drawn raves, particularly the beer-battered onion rings, the tater tots and, earning the highest praise, hush puppies with honey butter.

He takes some chances, too. We're not sure how many travelers who fork over $499 for a room at the Mandarin Oriental — the lowest rate available when we checked — know exactly what the Roasted Shoat Leg with Baked Beans ($22) consists of, but we're glad Ziebold put it on the menu.

McCoy's beverage program delivers plenty of pep with both his carefully chosen wine list and a dandy collection of cocktails that cost $10 each. Pastry chef Amanda Cook slides over from CityZen each day to whip up such down-home classics as fried apple pie — not a deconstructed hip interpretation of it, but a straightforward version that's finding plenty of fans. “It's McDonald's on steroids,” Ziebold told the Washington Post.

The predecessor restaurant to Sou'Wester, MoZu, had an Asian-inspired design. The new place goes with more of a farmhouse feel. The interior is modest, so we have to wonder what weary travelers think when they plop down at a table in Sou'Wester after a long day on the road and start eating. We bet they'll quickly formulate a plan to return to a hotel that can feed them like this one, which is why the hotel segment is likely to see other all-day restaurants getting a Ziebold-esque treatment soon.