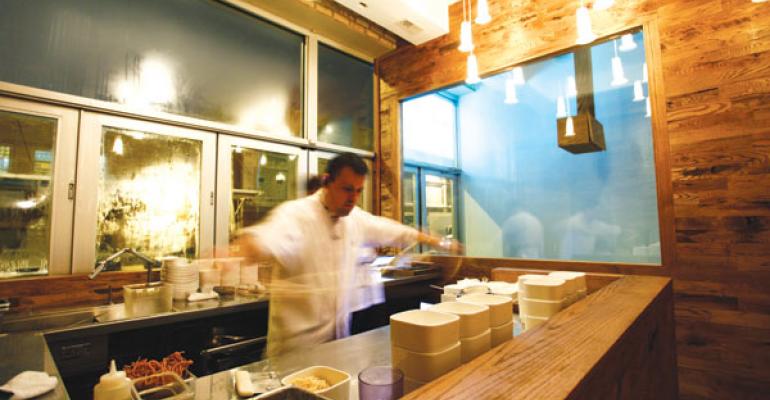 Homaro Cantu has dazzled foodies at his groundbreaking Chicago restaurant Moto since 2004. He's also become a star on the global think-tank circuit via presentations that demonstrate how his bleeding-edge culinary techniques could feed the world's poor for pennies. Now he's approaching the final frontier of the restaurant industry: making his style of sophisticated food recontextualization accessible to the masses, with price points to match.

That's the modus operandi of his new restaurant, iNG (the name stands for Imagining New Gastronomy), which opened next door to Moto in February. It's where Cantu intends to prove that even the most adventurous, personal and labor-intensive of restaurant concepts can be transformed into a casual dining operation.

He and executive chef (and Moto alum) Thomas Elliott Bowman have their hands full on this one. Moto is a high-end operation where the edible menu offers guests just two options: a ten-course lineup for $135 or the Grand Tour Moto, 20 courses for $195. The food for either choice is complicated to produce at a commercial restaurant pace — class IV lasers, centrifuges and liquid nitrogen are just a few of the kitchen tools in use. That customers are all served the same dishes in the same order makes the Moto approach feasible.

But iNG is much more casual. Only three choices on the 15-item menu — mostly small plates, many Asian flavors — breach the $20 mark, and the rest are priced in the low teens or single digits. But given the a la carte service style, the food is every bit as challenging to produce as it is at Moto, if not more. A much-ballyhooed computer room, dubbed the “command center,” keeps track of kitchen production for iNG. Chefs wear ear pieces much like those used by Tour de France bike racers, through which an automated expediting system directs the firing of individual dishes.

Guests who don't want to order off the menu have a second option: ordering by the hour. It's $45 for a one-hour sample menu that features four chef-chosen items. There's a two-hour version as well, with the second hour's food costing $40.

There's also a third choice: dining at the four-seat Miracle Berry table, iNG's equivalent of a chef's table. Located adjacent to the restaurant's downstairs kitchen, it features a 15-dish lineup billed as a taste-tripping experience. It plays off the fact that the Miracle Berry — that's the market name — makes certain food items taste completely different than a guest's palate expects. The primary one: it makes sour foods taste sweet.

Still, most orders will come off iNG's a la carte menu. It has five sections, each with three items.

In true Cantu style, menu descriptions don't necessarily prepare the patron for how the item delivered to the table looks and tastes. Cantu and Bowman's food uses visual and textural tricks to produce consistent surprise.

Which is why the restaurant's casual patrons may struggle to pair beverages with this science-lab style food. The 25-bottle wine list (“Sipping”) is eclectic, the eight-label beer list (“Brewing”) is augmented by house-made nano-brews and three Japanese sakes are available by the glass or bottle. The brief cocktail list (“Mixing”) is topped by the Smoked Manhattan (Bulleit bourbon, sweet vermouth, Ardberg rinse, Angostura). It goes for $12. Beverage revenue is a key in casual dining, and iNG makes do with just a service bar, so expect some tinkering here.

Most of the molecular gastronomy hype died down years ago, and yet Cantu and Bowman have kept Moto, and now iNG, vibrant. No matter what high-tech device is used to produce a Moto or iNG dish, no matter how weird the food looks on the plate, it ultimately tastes good. Given the sense of adventure iNG provides, its casual dining rivals in Chicago are going to have to up their game if they want to compete.