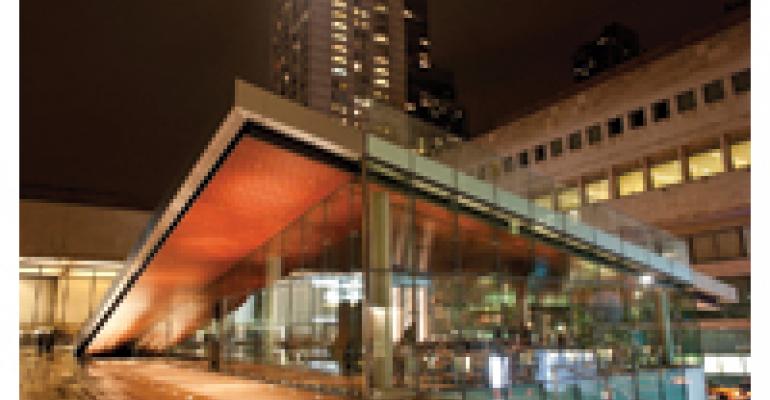 New York City is home to America's most discerning restaurant critics, and it's hard to argue with their collective assessment of a restaurant's food, service and ambience. But architecture? It's not their long suit. When confronted with the rarity of an edgy, built-from-the-ground-up restaurant whose design clashes with the traditional New York City mold — i.e., narrow dining rooms open only to the sidewalk, usually not very many seats, nearly always retrofitted into an older building — they don't quite know how to react.

Which helps explain why Lincoln, open since October on New York's Upper West Side, got such iffy reviews. Not bad ones, mind you — two stars from the New York Times, a single from New York magazine. But not raves, either.

Much more had been expected. Heading the kitchen was Jonathan Benno, who spent the last six years as chef de cuisine of Thomas Keller's three-Michelin-star Per Se. Bon Appetit's Epicurious.com website named Benno the most influential chef in the world for 2010. The proprietor was the 50-restaurant Patina Group. Patina c.e.o. Nick Valenti, a restaurateur's restaurateur if there ever was one, lives just across Central Park from Lincoln, and had made this one his baby.

Certainly the location was unmatched: the pavilion in front of Lincoln Center, the cultural epicenter of New York. On it was built the $20 million — that's not a typo — Lincoln, part of a $1.2 billion redevelopment of the Lincoln Center campus.

But when the critics came to dine, they took issue with how that $20 million — that's $133,333 for each of the restaurant's 150 seats — had been spent. They found the decidedly un-New-York-like building …off-putting. Its official description: “The restaurant is built on two levels and has a grass lawn roof open to the public, sloped in a rare hyperbolic paraboloid shape and ideals for picnics.” It's unusual, for sure.

Lincoln would fit in Las Vegas or L.A., but in the context of Lincoln Center, some thought it missed the mark. “Success in the kitchen does not mean Lincoln yet works as a restaurant,” opined Times restaurant critic Sam Sifton. “On that score, Mr. Benno and the Patina Group still have some distance to go. They have built a restaurant that lacks a center — a restaurant in which it is possible to eat well without really having a good time.”

Benno's food sure doesn't disappoint. He was the master of precision-driven French food at Per Se, but Valenti wanted a contemporary Italian menu for Lincoln. Benno came up with a knockout.

“This is my interpretation of classical Italian cuisine, the food I knew in my heart I wanted to cook,” he says. That means a six-item list of antipasti including Crudo Di Tonno (Atlantic Big-Eye Tuna, Castelvetrano Olives, Radishes, Lemon Parsley) for $22; Trippa Originata (Honeycomb Tripe, San Marzano Tomatoes, Herbed Breadcrumbs) at $20; and Capesanta in Padella (Sea Scallop, Sunchokes, Almonds, Sunflower Oil), $24. Many reviews have noted that this last item contains just one lonely scallop for that $24 price.

Halibut (Pole Beans, Taggiasca Olives, Young Artichokes, Acqua Pazza) for $34 is a standout among the fish options. Three items in the meat section cost around $40, while the Bistecca Alla Fiorentina Per Due (28-day Dry-Aged Prime Black Angus T-Bone, Bone Marrow Sformato, Cipollini Agro-Dolce) commands a $120 price. Sides go for $14, as do most of the 11 dessert options. Cocktails mostly fall in the $14 range.

The seven-course dinner tasting menu costs $120, $80 more if paired with the chef's choices from the 400-bottle Italian wine list. The projected check average overall at dinner: $110.

The prices may be a little steep, and the dining room might take a while to get used to, but Lincoln looks like a winner long-term. It's destined to be a cash machine of prodigious proportions, because it will serve lunch, dinner and a $36 weekend brunch. There should be plenty of customers for each daypart, because Lincoln is situated in one of those magic areas of New York that draws tourists and nearby workers during the day, then a huge pre-theater crowd plus a regular dinner rush at night.

So far, it's hats off to Benno for being able to produce his level of food in a place this busy. But we still can't figure out why the same people who found New York's all-glass Apple store so appealing can't get behind a restaurant built to similar effect. They'll be missing some fine meals until they get over it.