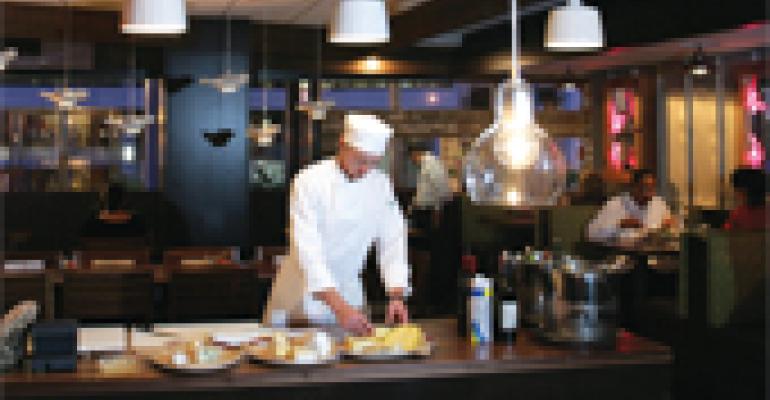 Green, From The Ground Up

Seasonal, sustainable ingredients drive the menu at many contemporary restaurants. But none of these places have more foodie street cred than Founding Farmers, a 250-seat upscale/casual operation that opened in mid-September in Washington, DC. Its backers don’t just espouse the farm-to-table philosophy; they live it. They own their farms and now, with the opening of this restaurant, they own the tables, too. The restaurant is bankrolled by the 42,000-member North Dakota Farmers Union. The livelihoods of NDFU members depend on the sustainability of small-scale agriculture, so their attachment to this concept is highly personal. So much so that they would open a restaurant 1,600 miles distant from NDFU’s Jamestown, ND headquarters to demonstrate how much can be done with fresh, locally sourced and, ideally, family farm-sourced ingredients.

NDFU hooked up with foodservice consulting firm VSAG, Inc. to bring Founding Farmers to life. VSAG helped the owners further leverage the sustainability angle by having the restaurant meet both Leadership in Energy Efficient Design (LEED) standards and Green Certified Restaurant operational standards. The result is an 8,500-sq.-ft. eco-friendly showcase located inside the new headquarters of the International Monetary Fund on Pennsylvania Ave., just a few blocks from the White House.

“Founding Farmers is an exciting concept that is honestly derived from a great history of American farm culture and what it means to serve ‘true food,’” says VSAG principal Dan Simons. “It’s not about being trendy. We’re serving foods that help support the environment and we are bringing the green movement right to the table.”

Indeed they are. But being on the politically correct side of certain issues gets a restaurant only so far. The food has to stand on its own. Executive chef Graham Duncan’s job is to see that it does. He’s serving breakfast, lunch and dinner, oversees a bar and late night menu that runs until midnight, and is in charge of the noon to 9 p.m. Sunday Supper. The food is billed as “homemade and ‘scratch made’ traditional American classics inspired by the heartland with sustainably farmed products, including locally sourced items and inseason vegetables and fruits whenever possible.”

Which it is, but the menu is much hipper than this description would lead you to believe. Sure, there are down-home classics like Southern panfried chicken ($16), farmer’s meatloaf ($15) and roast
pork tenderloin ($19). But patrons will also find more up-to-date offerings such as lobster mac and cheese ($25), braised short ribs ($26) and ground-to-order mini-burgers ($9 for three). Flatbread fans can choose from among seven options (e.g., La Quercia Prosciutto, fig and mascarpone, $8) and cheese aficionados can head up to the mezzanine level to select from among three farmstead American cheese plates. The “We Want the Funk, Give Up the Funk!” version, featuring pungent cheeses, goes for $16.

The menu specifies the many family farms from which Founding Farmers sources ingredients. It also offers the following manifesto: “The difference between institutional/corporate farming vs. family farming affects everyone: our health, our land and our lives. You can trust we understand the difference, while you enjoy the taste of true food and true drink in a restaurant owned by family farmers.” By
the way, the name Founding Farmers refers to the fact that many of America’s founding fathers, including George Washington and Thomas Jefferson, owned land in the DC area and farmed it.

The restaurant’s design and equipment reinforce the message sent by the food. On the design front, the restaurant was constructed to meet stiff LEED requirements. That means reclaimed barn wood on the walls, reclaimed stone pavers as flooring, and fabrics and carpeting made from postconsumer recycled content material used throughout. Other flooring and the tables were made from wood salvaged from blown-down trees, requiring no cutting. Energy efficiency is maxed out, too, up to and including green-sourced wind energy supplemented power. It would be hard for a restaurant to have a smaller carbon footprint than this one does.

Earth-friendly practices are the rule in the dining room, too. For example, a state-of-the-art water system provides fresh-filtered, purified, mineral-filled sparkling and still water, the idea being to minimize truck pollutants required by delivery while keeping bottle and glass waste to a minimum.

Founding Fathers holds itself to a high standard of eco-friendliness, even though doing so is costly. But it’s a matter of principle for its backers. “We truly believe that we have created a new model to demonstrate that some profit should not be taken when the environmental impact is too great,” says General Manager Ralph DeRose. But as he told the Associated Press, “To do farm-to-table the way you envision it, you need to do it like this.”

If you’re thinking about going green on your next project, you may want to take a trip to Washington to check this place out. It’s about as pure a play on the concept as there is.