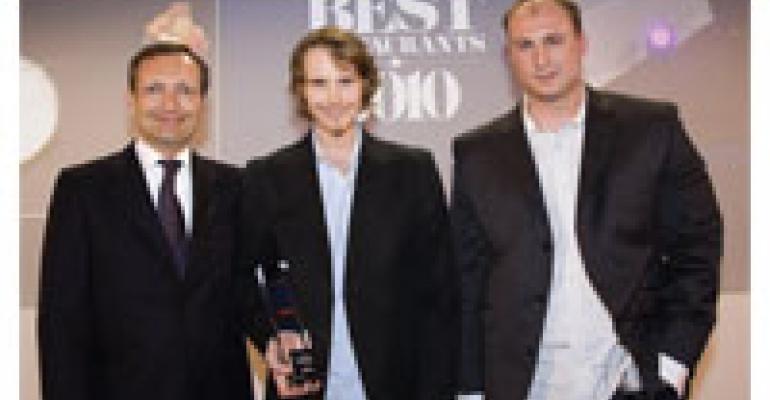 May was quite a month for Grant Achatz. His Chicago restaurant Alinea came in at No. 7 on The Restaurant magazine's list of the Top 50 restaurants in the world, making it the highest-ranking restaurant in North America. Next, Alinea won a 2010 James Beard Award for outstanding service, the fifth Beard Award either Achatz or his restaurant has received. Best of all, there's no sign of recurrence of the tongue cancer that threated his livelihood and life in 2007.

Time to kick back and enjoy the rewards of a meteoric career for a while? Nope. Instead, no sooner did Achatz put his new awards up on the shelf than he announced plans for a second restaurant. It's called Next, and its business model is as revolutionary as the molecular gastronomy-based cuisine Achatz produced at Alinea. Next's food will be revolutionary, as well, but more in concept than in execution.

Let's look at his business model first. Here's how the chef describes it to customers on the restaurant's website.

“A meal at Next will represent a great value. Depending on the menu AND what day and time you are dining, food will be $40 to $75 for the entire prix fixe menu. Wine and beverage pairings will begin at a $25 supplement. Next's goal is to serve 4-star food at 3-star prices.”

Nothing too revolutionary here — except that patrons will have to buy a prepaid ticket if they want to eat it.

“Instead of reservations our bookings will be made more like a theater or a sporting event. Your tickets will be fully inclusive of all charges, including service. Ticket price will depend on which seating you buy - Saturday at 8 PM will be more expensive than Wednesday at 9:30 PM. This will allow us to offer an amazing experience at a very reasonable price. We will also offer an annual subscription to all four menus at a discount with preferred seating.

“The tickets will be available via our website, and we are building the reservation system from scratch to ensure the best customer experience. It will be simple to use, efficient, and familiar to anyone who has booked a show or travel online.”

Boy, this guy has really thought it out. He gets his cash up front, he gets control of the “service charge” attached to each ticket and he doesn't have to pay people to take reservations any more. At Alinea, “We now pay three or four reservationists all day long to basically tell people they can't come to the restaurant,” Achatz told the New York Times. In short, a lot of the hidden costs of restaurant operation disappear from the Next model. Yet operational efficiencies should increase because the number of patrons who have purchased prepaid tickets will be known before dinner prep gets under way.

So what's going to be on the menu? Achatz has some serious time- and taste-traveling in mind.

“Next Restaurant will serve four menus per year from great moments in culinary history — or the future. Our team of chefs will investigate, test, refine, and present authentic menu interpretations from cultures, places and times. Depending on the cuisine, meals will be five to six courses and will include food, beverage pairings, and service.” First up comes food from Paris in 1912, then it's on to Hong Kong 2036 and Sicily 1949.

There's also going to be a “bartenderless” and “bar-less” bar, The Aviary, whose drinks will be produced by chefs in a special “drink kitchen.” No tickets will be required to enter The Aviary.

Next Restaurant and The Aviary are set to open in Chicago sometime this fall. We feel sure Achatz's fellow operators can't wait to see how well the prepaid ticket system will work. If it does, and if it can be applied elsewhere, it's going to take a lot of the guesswork out of the restaurant business, and put a lot of money-saving efficiencies in.