/sites/all/themes/penton_subtheme_restaurant_hospitality/images/logos/footer.png
Recent
Recent
Flavor of the Week: The Negroni: The boozy cocktail from Italy
May 10, 2021
New on the Menu: Seafood sliders, watermelon salad and spiced green beans
May 07, 2021
More than 186,000 restaurants and bars have already applied for the Restaurant Revitalization Fund
May 05, 2021
Here’s what it’s like to apply for a Restaurant Revitalization Fund grant
May 04, 2021
Five Things: Hakkasan Group is acquired by Tao Group Hospitality; what to do if your Paycheck Protection Program loan is not forgiven
May 04, 2021
Featured
Alternative delivery players challenge third-party delivery stronghold
May 04, 2021
The new maximalism: Will restaurant design do a 180 into rebellious excess?
Apr 22, 2021
Pat Martin, chef and owner of Martin’s Bar-B-Que and Hugh Baby’s, discusses the business and meat supply of the coronavirus pandemic
May 05, 2021
Eleven Madison Park in New York City to reopen with meatless menu, chef and owner Daniel Humm says
May 03, 2021 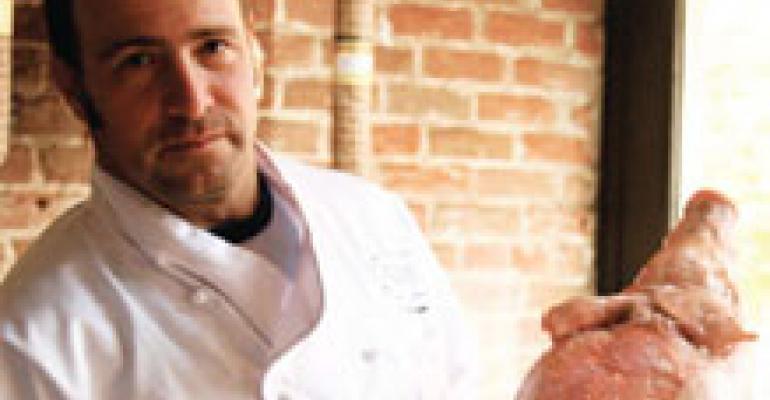 Everything But the Squeal

We’re not sure Frank Bonanno fully grasps how this artisanal cooking thing works. Someone who reaches his level of achievement—chef/owner of Denver’s top-rated Mizuna and Luca d’Italia restaurants—is supposed to be sourcing ingredients from artisanal suppliers, not still making so many of them himself. But that’s what he’s doing at his third and newest Denver operation, Osteria Marco, a casual Italian salumi bar/pizzeria he opened last November.

At least Bonanno knew what he was getting into. Here’s what he wrote in his blog back when Osteria Marco was still at the thinking-out-loud idea stage. “I’m continually impressed by the caliber of our staff at Luca and Mizuna, but wouldn’t it be great to have that kind of service, that quality of artisan food, at a pizza joint? What if we could serve sandwiches with real meats from real animals roasted over a real fire? Or if we had cheeses with texture and flavor and crusty, rustic house-made bread?”

He’s doing all of that now at Osteria Marco and, yes, it turned out great. It’s a good thing it did, because Bonanno stepped way out of his comfort zone for this one. Not only is he working in a casual setting instead of a white tablecloth setup like his other two restaurants. He’s doing it in a different part of town. Mizuna and Luca d’Italia are located just across a parking lot from each other out in Denver’s Governor’s Park neighborhood. Osteria Marco sits in restaurant-rich Larimer Square, just steps from the city’s downtown. Why go there?

“Larimer is the most prestigious street in Colorado,” Bonanno says. “We had been slated to buy a restaurant location near there about a year ago, but something fell through with the landlord. This is the concept I wanted to do since that deal fell apart.”

And what a concept it is. Osteria Marco’s food provides much of the flavor and authenticity of Bonanno’s other restaurants, only at a lower price point and in a more laid-back setting. What a godsend for Denverites. It’s like a half-off sale from the town’s most-honored chef, every night.

Arriving patrons step into a street-level salumi stand that doubles as the garde manger station. Then they head down a flight of stairs to Osteria Marco proper, a big room—140 seats—with a look and feel that make it seem like the place has been there for years.

The menu sticks to mainline Italian fare. The salumi and formaggio list includes seven house-crafted items, four of them cheeses. Most of the antipasti, salads, panini and pizzas items are priced in the single digits.

It’s hard to beat the combination of a chef with Bonanno’s knowledge, technique and skill paired with the level of ingredients he’s offering at popular prices here. So how does he make money?

“Homemade artisanal food is expensive,” he says. “That’s why our idea of combining just a couple of artisanal ingredients and making them taste great works. But we need to do volume to serve this kind of food with Larimer Street overhead.”

Business so far has been strong. How’s the food? Jason Sheehan summed it up this way in Westword magazine. “I ate everything laid before me with wild, finger-licking abandon.” Translation: It’s a hit.