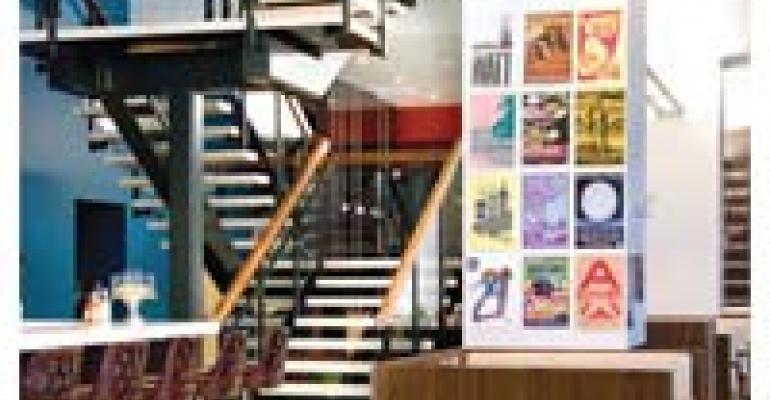 Debut: Diner from Another Planet

You have to hand it to the people who run Sage Restaurant Group. They knew they had to make a big splash when they opened The Original Dinerant in Portland, OR, early last summer, and they did. It's hard to overlook a 191-seat restaurant that takes the traditional diner format as a point of departure, mixing together an energetic blur of contemporary food, drink and design elements to produce a dining experience that is definitely unique and hip.

It's a good thing they did because Portland's restaurant scene is one of the most vibrant and sophisticated in the country. The city is a tough audience for any new concept that wants to make a mark.

Sage's Peter Karpinski had his heart set on doing a diner. “But I wanted it to be a bit nicer than what a typical American would perceive as a greasy spoon diner,” he told the Portland Tribune. “That was my idea for the word ‘dinerant.’ It's really diner and restaurant smashed together.”

So what was the result of the smashing? On the menu, off-the-wall items like chef B.J. Smith's Voodoo Doughnut Burger ($7.95) or Pigs in a Blanket made with a Kobe beef frankfurter and cheddar fondue ($7.95) set the culinary tone. The genre-bending design offers a two-story atrium, a floating staircase, a cactus garden, even a DJ booth, while still managing to seem diner-esque.

It sounds a little wacky, but the Sage people have a firm grip on the business aspects of restaurant operation. They've opened such notable restaurants as Temple Downtown in Providence, RI; Second Home Kitchen and Bar in Denver; and Mercat a la Planxa in Chicago (whose chef, Jose Garces, just won the Food Network's Next Iron Chef competition). With The Original, they're reaching for the holy grail of the restaurant business: an all-day restaurant that features elevated food and drink.

The Original's lengthy menu updates American classics and gives them a modern twist.

Breakfast includes six varieties of pancakes, including such mind-bending varieties as Froot Loops and mac ‘n’ cheese. A tall stack costs $7.25. Lunch includes all the diner standards, some of them tricked up to appeal to the foodie set. Sandwich offerings include a three-hot-dog flight ($10.50): Chicago-style, New York-style and Portland-style. Entrees include chicken-fried steak made with a Cascade natural flat iron steak, corn flake crust, country gravy and grilled rapini ($13.95) and straightforward beef stroganoff ($12.95). Less retro are the appetizers: the $5 choices include short rib pierogies and lamb meatballs with Meyer lemon and raita.

Sage Hospitality, the parent company of Sage Restaurant Group, operates the Courtyard Portland City Center, which houses The Original. Thus The Original functions as a hotel restaurant, even handling banquet catering and room service. We think guests will be buzzing about its imaginative approach just as loudly as Portland's food community already is.