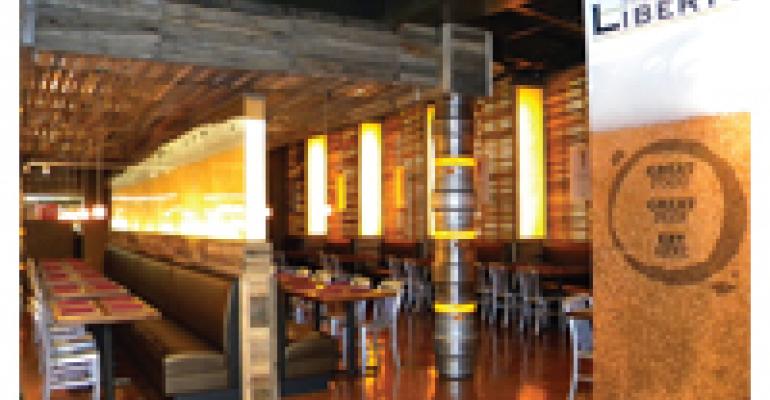 Debut: Better By the Barrel

If you're wondering why gastropubs have gained traction so quickly as a niche segment in full service, you don't have to look any further than Tom Condron and Matthew Pera's The Liberty. This 200-seat Charlotte, NC, operation, which opened last October, provides a can't-miss template for anyone interested in pursuing the pub-with-better-food ideal. Its beverage offerings are exhaustive, Condron's food is adventurous and, most importantly, the concept's business strategy makes it financially feasible for both its owners and its patrons.

Condron and Pera were long-time employees of Harper's Restaurant Group's lead concept, Upstream. They had quite a run there, with the place tabbed as an Esquire “Best New Restaurant” the year it opened and then ranked as Charlotte's most popular restaurant by Zagat. But Charlotte, home base to both Bank of America and Wachovia (now part of Wells Fargo) Bank, was hit particularly hard by the recent financial crisis. As the expense account business began to slow, Condron and Pera decided to open a more reasonably priced restaurant, this time as owners. They felt the gastropub model was the best way to go.

“Here are two guys who spent most of our lives in fine dining,” Pera told the Charlotte Business Journal. “And we're not opening a fine dining restaurant. What does that say?”

What it says is that affordability is king. Customers still have high expectations for food and service; they just want to pay less for them than they used to. Done right, a gastropub meets these demands.

Condron and Pera got sweet deal on a 7,800-sq.-ft. space in Charlotte's South End neighborhood that had once been a steakhouse. Their lease gave them a 50 percent rate cut during their first year of occupancy and they were able to equip their kitchen with used gear at 40 cents on the dollar.

With startup capital requirements under control, it was time for Condron to fire up the kitchen. Here's where a gastropub doesn't want to cut corners. The primary draw for customers at The Liberty is the notion that they are getting imaginative, chef-driven food that's several steps above what they would get at a sports bar, brew pub or similar watering hole.

At The Liberty, Condron draws on all facets of his background. He's worked with Michelin-starred chefs, at high-profile U.S. restaurants like Le Cirque, and has run high-end kitchens in Charlotte since 1997. He knows first-hand what pubs are all about, having been born and raised in England.

The beverage lineup offers 19 handcrafted beers on tap, plus one line reserved for $2 pulls of Pabst Blue Ribbon. There are 30 wines available by the glass, as well as a full selection of spirits.

It's all a formula worth emulating by any aspiring gastropub entrepreneur — just as long as you can get a guy like Condron to create the food and someone like Pera to handle the front and the business side. This talented duo has loose-knit plans to open four more gastropubs in the near future. Judging by their work at The Liberty, we think they'll pull it off.