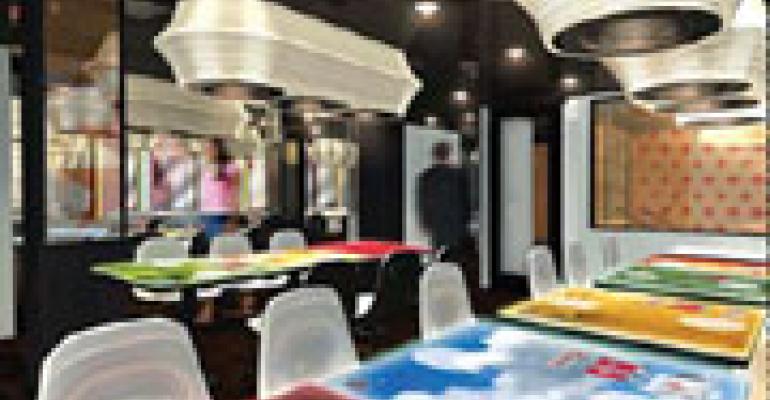 Guests can do it all from their tables at Asian-fusion restaurant Inamo, which opened in London last month. Make that with their tables, each of which functions as a full-size computer screen controlled by customers via a recessed mouse.

The result: Patrons orchestrate their own dining experience. They scroll through the menu as life-sized images of each dish appear before them, placing an order when ready, then watching their meal being prepared via a kitchen cam, even paying their bill at the end. In a function akin to changing computer wallpaper, guests can also select a new look for their table with a click of their mouse.

The system is generating plenty of buzz, but doesn't it sound like something that would break all the time? Not a problem. “We are using projectors and a custom-built panel that no one else is using,” says owner Danny Potter of his ceiling-mounted technology. “The client can't break the machine or crash the system.” What about tipping? A 10 percent service charge goes to food runners who deliver meals to the table.

Some of you might be asking: an interactive tabletop? That sounds a lot like Microsoft's much-ballyhooed Surface technology. Introduced in June, 2007, Surface is essentially a table that functions as a 30-inch screen, the computer stored below. It's a cool product that might one day appear in restaurants.

But it's not what Inamo is using. Its technology is based on a proprietary design invented by the restaurant's Oxford-grad owners. Fear both systems if you make your living waiting tables. Or turning them.