Rabbit is mild and versatile, lending itself to spring menus in a wide variety of forms.

Chef Todd Kelly prepares rabbit three ways for one dish. The thighs are pounded and lined with spinach, then stuffed with forcemeat made with foie gras and Serrano ham and rolled. They are served alongside seared rabbit tenderloin and crispy fried legs with a polenta galette, white asparagus and raspberries.

Il Fornaio, based in Corte Madera, CA
Il FornaioThe 20-unit Il Fornaio restaurant chain is featuring a rabbit dish on the regional menu this month, which focuses on L

The 20-unit Il Fornaio restaurant chain is featuring a rabbit dish on the regional menu this month, which focuses on Liguria. The Trofie Al Toccu Di Coniglio is a pasta dish with a roasted rabbit and root vegetable ragu, Taggiasche olives, toasted pine nuts and pecorino cheese. Michael Mindel, Il Fornaio’s senior v.p. of marketing, says the regional menus give the restaurants a chance to tap ingredients like rabbit, which are commonly used in Italy. “For us, we don’t worry so much about being trendy as about being authentic,” he said. “People who like it, they come for it. Some people are not enthusiastic and avoid it, but other people are thrilled because it reminds them of their youth, it reminds them of something their grandmother cooked for them, or it reminds them of a trip to Italy.”

Chef John Manion braises rabbit for his Rabbit Coxinha, a take on  the popular Brazilian street snack coxinha. The braised rabbit meat is shredded and stuffed into dough to make a croquette, which is then served with frisée and a whole-grain mustard vinaigrette with pickled carrot. Coxinha is typically made with chicken. “When they’re done right, it’s kind of having your chicken and dumplings in one bite,” Manion explains. “I did it with rabbit because rabbit is delicious, and served them with pickled carrots because serving rabbit with carrot will never not be funny.”

At Kachka, which features the food of the former Soviet Union, chef Bonnie Morales braises hindquarter rabbit meat in a clay pot with smetana, a type of sour cream common in Eastern Europe, porcini mushrooms, sour cherries and garlic, and served with draniki, a potato pancake.

At José Chesa’s Spanish restaurant, rabbit is marinated with sherry and served in paella with Iberico ham, beans and boletus ali-oli, Spain’s take on aioli.

Chef Tony Maws is serving a ragout of rabbit sausage and forest mushrooms with asparagus, fava beans, forked potatoes, and farm-fresh egg. At his Kirkland Tap and Trotter in Somerville, MA, a gastropub concept, Maws makes a rabbit terrine in the spring as a cold appetizer, served with a red-onion compote. And sometimes as a rotating house special, Maws serves Vadouvan sausage and rabbit leg stew. 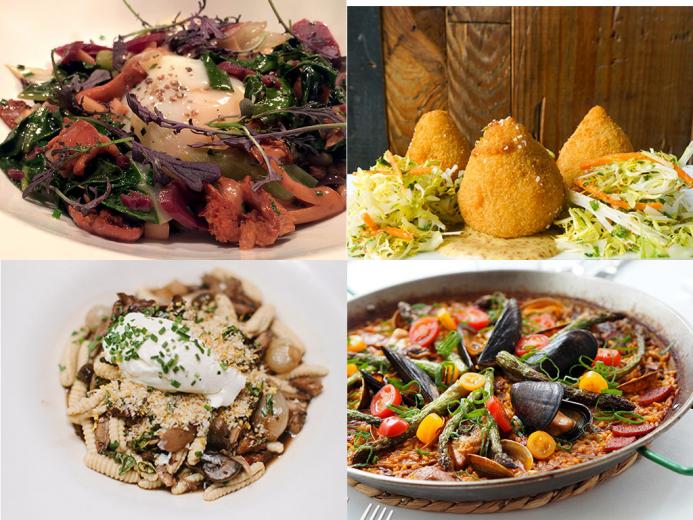