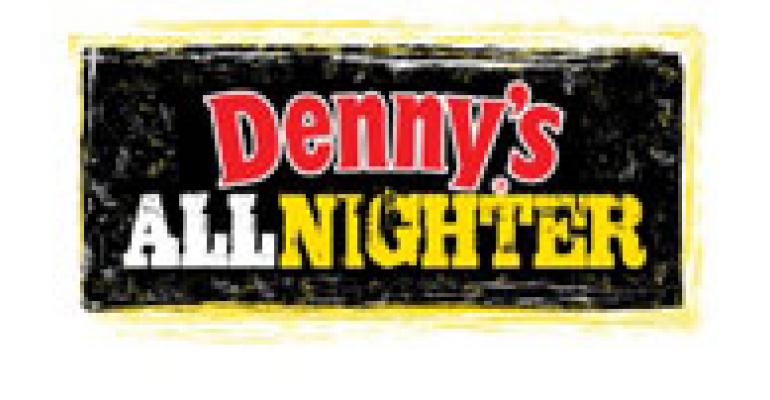 You’re Kidding. The After-Party Is At Denny’s?

They’re going for the grand slam of miracles at Denny’s, hoping to make the aging family dining chain hipper, more relevant and more profitable while spending next to nothing on marketing. How? The always-open chain is rebranding its late-night daypart to better embrace alternative rock bands, hoping their legions of twentysomething fans will come along for the ride. Denny’s c.e.o. Nelson Marchioli thinks he can boost late-night business by five percent—that’s $24 million annually chain-wide.

Pinning a publicly traded restaurant company’s future on alternative rock? It seems like the kind of idea that would result if stoner interns were inadvertently put in charge of marketing while the real executives were on vacation. But why not give it a try? Denny’s, whose 1,500-plus units did $2.4 billion last year—roughly $1.72 million per store—could use an injection of life. Sales have been down in eight of the past nine quarters.

The chain has traditionally done strong business at breakfast, less so at lunch and dinner. The 10 p.m. to 5 a.m. late night/early morning daypart has been a good performer, too. No mystery here. Who else was open?

But recently, potential customers have been able to choose from a slew of new late-night dining options. Many QSR chains now serve until midnight and beyond. In addition to extending their hours, their food is more in tune with the tastes of the bleary-eyed kids who dominate what might be called the overnight daypart.

Even so, Denny’s has been able to hold on to a decent share of this market. Nearly half of Denny’s late-night crowd is under age 24 and the majority—six out of ten—is male. Some, the chain says, are traditional second-shift workers who have just gotten off work or third-shift types having lunch. But fully two-thirds of customers come rolling in after a night on the town, landing at Denny’s after the bars and clubs shut down. It’s a demographic that’s ready to eat—a lot.

“We have a 55-year heritage of being open 24/7, and we’re sharpening our focus on the late-night crowd so we further stand apart from the ‘other guys’ who shut their doors and only push food through a window late at night,” says Marchioli. In other words, he thinks the night owls would rather have a sit-down, full-service meal than a bag of fast food burgers they have to eat in their car. It’s hard to argue with his logic, but heading to Denny’s isn’t necessarily top of mind for Marchioli’s target audience.

But music is, which is where the alternative rocker theme comes in. Denny’s wants to become a place where twentysomethings feel comfortable—a formidable challenge given the look and feel of a typical Denny’s unit. The company has a three-pronged program designed to change this long-standing perception.

One aspect will see Denny’s waitstaff change uniforms come 10 p.m. Off go the black pants and collared shirts, replaced by jeans and T-shirts.

The background music will change, too. The plain vanilla soundtrack that plays the rest of the time at Denny’s will be swapped out for one featuring alternative rock.

The biggest change: the menu. Make that menus. Denny’s assembled a pack of 18-24-year olds for focus groups and taste-testing and came up with an All Nighter menu. It features:

Between these two menus and the still-available standard menu items, Denny’s will have plenty of stuff-your-face food to satisfy its young customers’ late-night cravings. But to make sure the presumptive alternative rock fans get exactly what they want, the company hired upper-tier alt-rock groups Taking Back Sunday, Plain White T’s, Eagles of Death Metal and the All-American Rejects to come up with new menu items. Presumably, their experience with post-gig chow will help Denny’s further tap into the taste preferences of alternative music fans. The first invention, from Taking Back Sunday, is Bacon Cheeseburger Fries, consisting of French fries topped with beef, cheese, bacon and onions. It will be available in August.

The chain will also link up with emerging bands via its “Adopt-A-Band” program. The idea here is that bands list themselves on the chain’s new online music hub website, www.dennysallnighter.com, for a chance to become a Denny’s Adopted Band. The hope is that each group’s fan base will mobilize to vote early and often so that their fave band gets adopted, with adoption meaning free meals for the band at Denny’s no matter where their next tour takes them, plus a promotional push for their music from Denny’s. The first set of adopted bands include EndeverafteR, Forever the Sickest Kids (pictured above), Foxy Shazam, Saving Abel, Switches and Take the Crown.

Will it work? “Late night has always been part of the Denny’s DNA,” says Mark Chmiel, the company’s chief marketing and innovation officer. “There’s an underground, almost funky kind of cool associated with our brand. To play with that, we’ve teamed up with some terrific, up-and-coming bands in out-of-the-box ways.”

Out of the box, indeed. But we love the idea of rebranding just one daypart, instead of tackling the whole thing. The latter approach just hasn’t moved the needle for Denny’s, so we’re glad to see them taking a shot. If it works, you can bet case writers from the nation’s top MBA-granting business schools will descend upon Denny’s headquarters to find out how they did it—something that was never going to happen for any of the chain’s previous marketing campaigns.