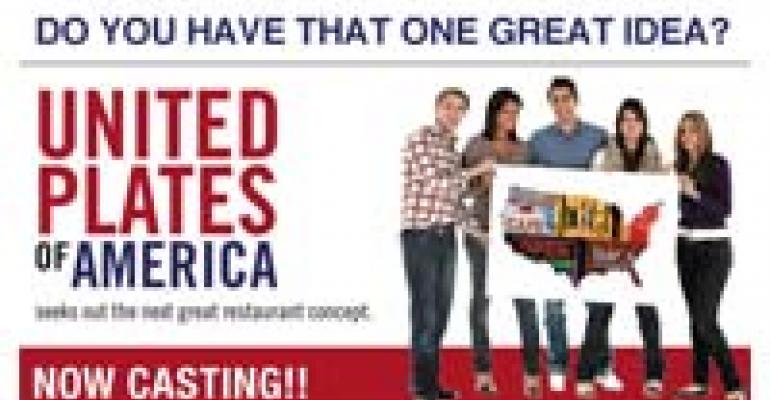 Win this Show and the Top Chefs will Work for You

Can’t cook but you want to be part of a restaurant reality show? Your time has come with the arrival of NBC’s United Plates of America. All you need is a good idea for a new restaurant and an audition tape that explains how it would work. Win and you get an ownership interest in a four-unit national chain based on your idea. We say apply now.

OK, maybe NBC’s The Chopping Block series, hosted by British superstar chef Marco Pierre White, was a ratings dud of epic proportions. That was the 2009 reality show whose winning couple got a cash prize that would enable them to open an independent restaurant of their own. But NBC still thinks a restaurant reality show can be a big ratings winner. Now the network has cooked up another reality series where the contestants are aspiring restaurateurs. Its working title: United Plates of America.

No big-name chefs are involved this time around, even thoughthe same outfit—Magical Elves—that created Top Chef produces United Plates of America. This new show is all about concepts, not cooking, and the judges will be the people who will invest money in the winning idea.

Participants need a great idea for a restaurant to get on the show. Once there, they’ll have to demonstrate their ability to operate it via a series of challenges. If your personal skill set leans more toward the business aspects of restaurant operation than to the culinary side, this is the show you’ve been waiting for.

But what a prize for whoever wins! Ownership of not just one restaurant, but four. And not just four restaurants that might open some time in the distant future; four working restaurants that will already be up and running. The timing of the show is such that the winning concept will debut simultaneously in four locations across the U.S. on the night of the show’s season finale.

“This is the first time the culinary and business worlds have come together in a big event series where the prize is one of the largest in reality TV history,” NBC’s Paul Telegdy told the Hollywood Reporter. “Not only will viewers get to watch the competition unfold, they’ll be able to eat at the winning restaurant immediately after the show’s finale.”

Sounds like genius to us—providing the TV show is compelling and the winning restaurant idea makes real-world sense. Whoever finishes on top can skip right over the pay-your-dues phase of their career and jump right into ownership.

So how can RH e-newsletter readers get involved? You can find out all you need to know by heading to www.nbc.com/casting and clicking on the United Plates of America link. The selection timeline was a little vague when we looked today, but the site indicates that the producers will be holding open casting calls in select U.S. cities soon. In the meantime, interested parties are invited to fill out an application form and submit an audition tape (five minutes max) in which the idea is to pitch both your restaurant idea and yourself.

We see no downside here, other than the dubious prospect of having to open four restaurants in four different cities on the same night if you win. Who’s really going to be able to pull that one off? But so what? After the first couple of weeks, you’ll have your own national chain, and it will be famous because it was the winner on United Plates of America. What have you got to lose?