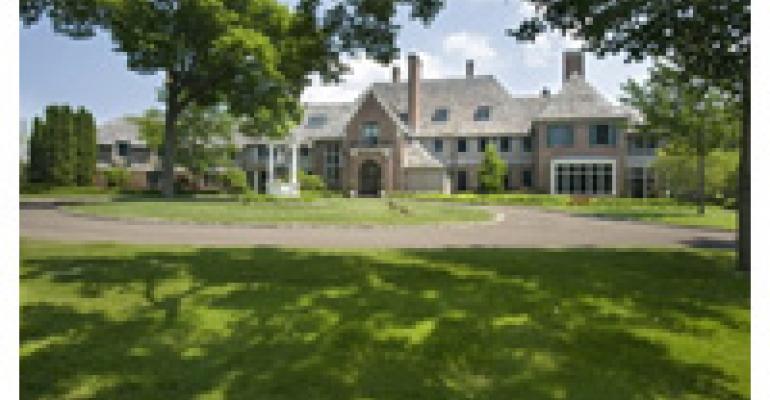 Bargain-hunting vultures are circling around real estate like never before, so let’s take a look at two premier restaurant-related properties currently up for auction. Note that we’re not talking about commercial spots that would make great restaurant locations. Nope, we’re aiming higher: Trophy properties formerly controlled by foodservice industry players whose incomes were in the stratosphere. One is Copia, the now-bankrupt wine and food center originally backed by Robert Mondavi and Julia Child, which sits on 17 acres on the Napa River in the heart of Napa Valley. The other is Southways, the palatial $53 million residence that housed the Jundt family, last seen trying to manipulate the Kona Grill casual dining chain to its own financial purposes. Get your bids ready now!

We’ll start by referring readers to the report on the unusual relationship between the Jundt family and Kona Grill we ran in our May 15, 2009 enewsletter (“Kona Grill: Riding A Wave of Trouble” (http://restaurant-hospitality.com/news/konw-grill-trouble-0513). Suffice it to say that previous financial shenanigans had caused then-Kona Grill chairman/c.e.o. Marcus Jundt to use his family’s sizable ownership position in publicly traded Kona to create a one-time cash boost structured to benefit just one stock owner: his father, James Jundt. Marcus Jundt was ultimately ousted from his position after other stockowners squawked.

Now the Jundt family’s palatial estate on Lake Minnetonka in the Minneapolis suburb of Orono has hit the auction block. Its 13 acres on Brackets Point include 1,700 feet of lakeshore and a 40,000-sq.-ft. home. The asking price was $53.5 million back in 2007; Chicago real estate firm Sheldon Good and Company. is taking sealed bids through Dec. 9.

We have no Minnesota real estate expertise and couldn’t even guess how much interested parties should bid if they want this handsome property. But we would point out that the home’s list price is almost exactly double the entire market capitalization of Kona Grill, a 23-unit upscale casual chain where annuals sales are $80 million. Can one guy’s house be worth twice as much as the restaurant chain (current market capitalization, $27.5 million) that ran him and his family off?

Sheldon Good and Company is taking sealed bids through Dec. 9. It will be interesting to see how much they are for.

Winemaking legend Robert Mondavi spent millions on Copia, meant to serve as an educational entity focused on wine, its relationship to food and its importance to American culture. The official name was Copia, The American Center for Wine, Food and the Arts. Another founder was Julia Child, whose original kitchen, including pots and pans, was on display there when the place first opened in 2001.

Copia was a triumph on many fronts, but turned out to be financially unsustainable. Proceeds from the liquidation plan approved in Copia’s bankruptcy action will go to the bondholders, who are collectively owed $78 million.

No one’s putting that sort of price tag on Copia’s real estate assets. But the 17-acre riverfront parcel is worth a bundle all by itself, and the improvements will drive the price high, too. They include a 78,632-sq.-ft. building that houses the former “Julia’s Kitchen” restaurant space, administrative offices, 13,000 square feet of exhibition space, a 270-seat theater, a library, several classrooms with audio-visual capabilities, an 127-seat demonstration kitchen theater, a café and a space that formerly housed Copia’s gift shop.

What’s it worth? The sky’s the limit on this one, especially because this combination of heart-of-wine-country location and physical facilities would be tough to duplicate. All the facility really needs is a better concept, commercial or otherwise. Many people who would favorably advocate for food, wine and the arts could never figure out exactly what Copia was all about. Whatever caused it to fail—and keep in mind that industry titans Mondavi and Child were behind it—real estate wasn’t the problem.

And now the site can be yours. “This property’s ideal location in the center of a world-renowned wine region, the quality and significance of its existing facilities and strong support from local government present an exciting opportunity for a new owner to develop a valuable and commercial tourism destination,” says Jerry Pietroforte, a managing director of Alvarez & Marsal Real Estate Advisor Services, which is handling the sale.

The deadline for bids on Copia is Nov.12. Feeling lucky?