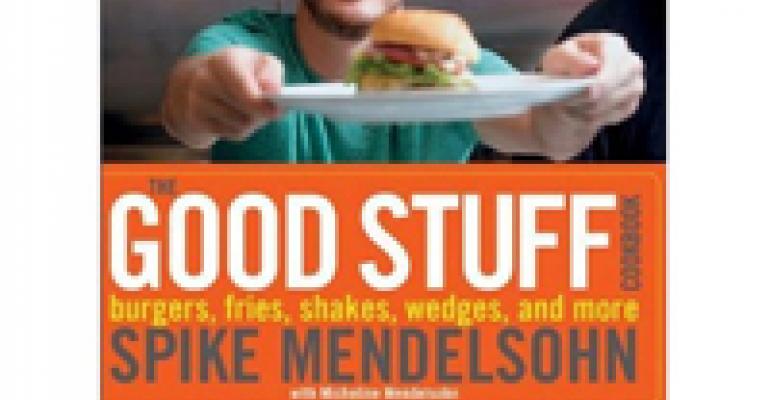 Top Chef Season Four competitor Spike Mendelsohn definitely got into the gourmet burger business when the getting was good. His new book, The Good Stuff Cookbook: Burgers, Fries, Shakes, Wedges and More (Wiley $24.95) tells you a little bit about how he did it and, better, a lot more about how you can get a piece of the action in this still-growing segment.

We’d grant that it seems a little early in Mendelsohn’s career for the guy to write a cookbook. He’s only 29; how much can he know?

After all, he’d had only middling success as a chef prior to the 2008 opening of his Good Stuff Eatery on Capitol Hill in Washington, DC. His most prominent job was as chef de cuisine at Drew Nieporent’s now-shuttered Mai House in New York City. But Mendelsohn parted ways with this Vietnamese-themed restaurant in the period between when Top Chef Season Four was taped in Chicago and the time it aired. So the notoriety he gained as the fedora-wearing hipster chef on the show—he’s widely recognized and remembered, even though he had to pack his knives and go home without even making the final four—didn’t just get him another job working in someone else’s kitchen. It enabled him to move to Washington, DC, and open his own place.

We don’t know if it was luck or genius that gave Mendelsohn the idea for Good Stuff Eatery, but he managed to combine two of the nascent restaurant industry trends of the time—farm-to-table cooking and gourmet burgers—in one concept. The place took off like a rocket, and he’s on the verge of opening other units in DC and franchising the concept elsewhere.

His book provides 120 recipes from the Good Stuff Eatery’s menu. Most of them show readers how to pump extra flavor into standard burger restaurant fare. There’s an emphasis on using the best-possible ingredients to do so, although few of them seem to actually rely on items sourced from local farms to produce the desired flavors.

Readers will have plenty to pick from throughout this 256-page book. There are a dozen sauce recipes, each mayonnaise-based, and nine salad offerings, every one beginning with wedge of iceberg lettuce. It’s a plus that Mendelsohn knows how to keep operations simple while still providing menu variety—a big key in the hyper-competitive upscale burger segment.

Twenty-two sides deliver interesting spins on must-have burger accompaniments, and the burger lineup itself features 23 tasty sandwiches. The 16-milkshake recipes will cause many operators to invest in a shake machine if they don’t already have one, and the 20 dessert recipes will keep your pastry department busy for months.

So will any of this be useful by other restaurants? We think so. Mendelsohn may not have lengthy experience in the restaurant world, but maybe it’s better that he doesn’t. His instinctive approach seems to work just fine. His ideas are fresh, contemporary and flavorful, with many of them seeming brand-new. If you don’t want a gourmet burger franchise right now, at least you can buy this book to familiarize yourself with the recipes you’ll want if you ever do.