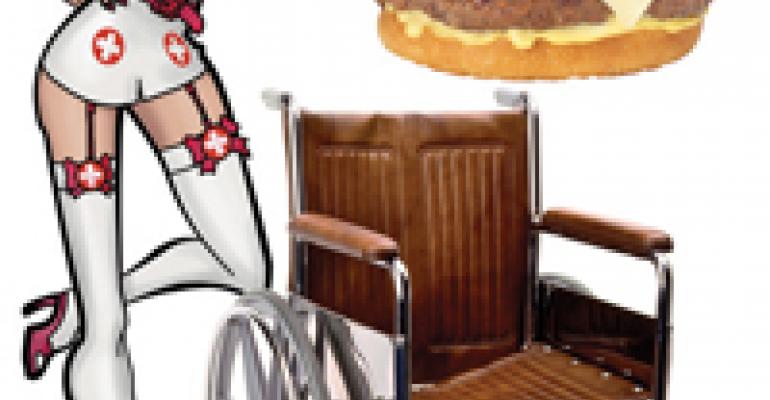 Now Even Thomas Keller is Flipping out for Burgers

Not long ago the National Restaurant Association was busy fighting the image that restaurant workers were just a bunch of burger flippers. Well, get a load of who’s flipping those burgers today: Bobby Flay at his Bobby’s Burger Palace, Laurent Tourondel at BLT Burger, Marcus Samuelsson at Marc Burger and, yes, Thomas Keller, whose Burgers and Half-Bottles is almost ready to go in Yountville, CA. How can you compete in the burger wars against this kind of talent? Buy a franchise. You could take the high road like Virginia-based Elevation Burger, which serves organic beef in LEED-certified green buildings, or else join Tempe, AZ’s deliciously unrepentant Heart Attack Grill on the low. Both concepts are looking for investors now.

Maybe it’s just the rocky economic times that are causing it, but the burger segment has never been hotter. Operators of every stripe, at every price point, can make money selling burgers right now.

On the low end, fast food feeders are about the only chains in the industry showing same-store sales growth, even though they’re pumping out low-ball “value meal” deals and couponing like crazy to get it. In the midmarket, places like Red Robin and Five Guys are still expanding at a steady clip. And as for the upper tier, we’d like to point out that the celebrity chefs who inhabit it aren’t just featuring one pricey burger on the menu of their flagship fine dining restaurant. Nope, they’re going all in with full-blown burger-specific concepts. Some of them even have plans to build out these concepts just like a small chain. Among them: the star chefs mentioned above (except for Thomas Keller, a one-unit guy) plus Danny Meyer’s Shake Shack in New York, Hubert Keller’s Burger Bar, and Govind Armstrong, now the proprietor of 8. Oz. Burger Bar, the first of which is located at the site of his now-relocated Table 8 in Los Angeles. Remember when guys like these would open a casual bistro because their fine dining restaurant wasn’t making much money? Now they cash in with burgers.

Collectively, it tells you there’s plenty of money to be made selling burgers, no matter how you choose to do it. But perhaps the smartest players are those operators who hope to prosper by offering something the other guy doesn’t have, even in a segment where there’s an “other guy” on every corner.

One interesting approach is that being taken by Elevation Burger. Opening its first store in 2005 in Northern Virginia, this fast casual concept sticks to the basics: burgers, fries, soft drinks and shakes. But its burgers are made from 100 percent certified organic, grass-fed, free-range beef and its fries are cooked in hearth-healthy olive oil. The kitchens at Elevation employ high-efficiency equipment, and its dining areas mix recycled, recyclable and what the chain dubs “rapidly renewable” finishes. At the moment Elevation Burgers has 24 locations in development in Texas, Pennsylvania, New Jersey, Maryland, Northern Virginia and Washington, DC. Restaurants footprints are between 1,500-2,000 square feet and seat between 50 and 150 customers, depending on the availability of patio space.

Get a franchise here and you’re plugging into a trifecta of trends: Green restaurants, organic ingredients and burgers. If your location is good, it’s hard to see this one failing. Think of it as a burger segment spin on the Chipotle Mexican Grill business model.

At the other end of the spectrum lies the Heart Attack Grill (its motto: Taste Worth Dying For). The idea here is that the more nutritionally and politically incorrect restaurant can be, the greater the return.

The restaurant’s customers are referred to as “patients,” and those who finish a triple of quadruple bypass burgers earn a wheelchair trip to their car. Their dining options include the single, double, triple or quadruple Bypass Burger, the quadruple being a protein extravaganza that includes four half-pound beef patties, four pieces of cheese and a generous serving of bacon.

Who are the customers? It’s guys, probably the same crew who watched Jimmy Kimmel and Adam Carolla’s over-the-top “The Man Show” and took it seriously or who frequent sports bars and strip clubs. Owner Jon Basso is careful to cultivate this demographic. The non-burger portion of his limited menu lists three kinds of soft drinks (including Jolt Cola), shakes and, strangely, filter-free cigarettes.

Does this customer demographic sound familiar? It should. It’s the same crowd dubbed “heavy users” by the fast food industry—guys in their teens, twenties and thirties who order multiple sandwiches at QSR outlets, throw the extra buns away and then construct the sandwich they really want. At Heart Attack Grill, this work is done for them.

Last Sunday’s national TV exposure wasn’t the first for Heart Attack Grill. In 2006, John Stossel of ABC’s 20/20 did a piece about a cease and desist order sent by the Arizona attorney general to Basso, demanding that he remove the word “nurse” from the Heart Attack Grill website. Stossel wondered why the Arizona A.G. had nothing better to do than harass restaurants. In the end, the dispute was great for business. “All they’ve done is ensure there’s going to be gazillions of these all over the country,” said Basso at the time.

There aren’t a gazillion yet. But there is a franchising program in place. It depends on endless free publicity and a stripped-down business plan that’s a thing of beauty to behold.

The heart of the pitch: “International acclaim without having ever spent a single penny on advertising.” Sound crazy? Heart Attack Grill has the clips to back it up. Operationally, the concept’s bare bones menu, minimal labor requirements and small footprint—1,500 square feet total, 250 of it for the back of the house—make the ROI pencil out nicely for those with $50,000 to invest in a franchise.

Does this take on the burger concept have legs? Basso thinks that the medical and media attention paid to this country’s record levels of obesity will continue to generate coverage of his restaurant. “As an irresponsible comic jester, the Heart Attack Grill shall sit in the epicenter of this upcoming media tornado! After all, we are the classic scapegoat for obesity... Just Spell Our Name Right!”

We can understand why seasoned operators might want to pass on something that’s as politically incorrect as the Heart Attack Grill. On the other hand, focusing on plenty of red meat and waitresses in skimpy outfits sure worked for Hooters.

Whether you prefer one of these extreme approaches to the burger segment or something in between, and whether you’re more comfortable buying a franchise or starting something on your own, the burger segment is ripe for development right now. It’s the one segment of the industry in which celebrity chefs don’t really have the edge.