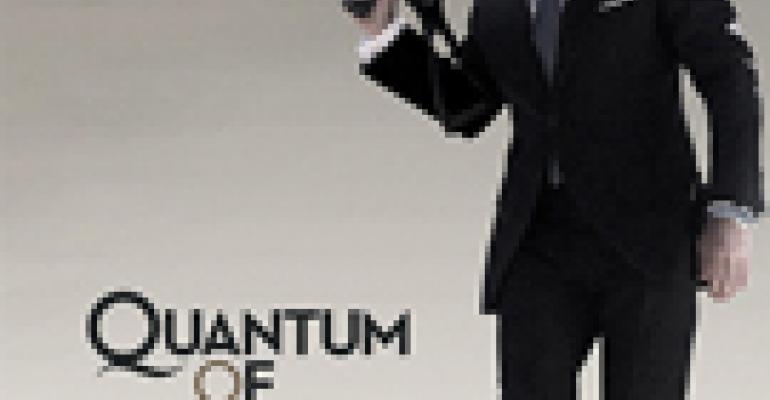 They're Gunning for the Full-Service Segment

The restaurant industry may be struggling, but investors are still pouring money into one allied niche: the restaurant-cum-movie-theater concept. This one-stop evening out idea isn’t brand new, but operators are taking it upscale now that they’ve figured out how better food and sexier beverage programs can drive new revenue. The latest take comes from Village Roadshow, whose in-theater wine list rivals those of many fine-dining locations. Sound like a good idea? There’s even a dinner-and-a-movie consultant who can help you get into this segment.

Did we just say that restaurants are struggling right now? They are, big time, but consider the plight of movie theater operators. There are several ways to see any movie—DVDs, Netflix—that are cheaper and more convenient than trekking to a movie theater. And potential patrons who have a broadband connection and know their way around the BitTorrent download site can get just about any movie for free, often before the DVD version has been released. The only reason people have to go to a theater and pay full freight to see a movie anymore is that theaters still get the new releases first, although their exclusive hold on them is a lot shorter than it once was. Filling up the seats during this narrow window of opportunity is how first-run movie theaters make their money, and good food and drink are seen as lures that will maximize theater utilization in the current climate.

The gold standard for dining and movie viewing remains San Francisco’s Foreign Cinema, where chefs Gayle Pirie and John Clark serve their much-honored Cal-Med cuisine as classic foreign and independent films play in the courtyard outside. It’s the pinnacle of the dining/movie watching experience, yet it’s not a pure play on the concept. The movies provide atmosphere as much as entertainment at Foreign Cinema, and the food’s so good and the industrial-chic space so winning that paying attention to the movie isn’t really the point.

Other operators have tinkered with the restaurant movie theater concept, most notably Texas-based Studio Movie Grill. This chain has five operations in and around Dallas, one in Houston and plans to open a second Houston location soon.

Here’s how it works. Once Studio Movie Grill patrons have taken their seats to view the movie of their choice, a server drops by to take their food and drink order. Those items arrive just before the movie starts, and patrons drink and dine as they view the first-run movie. A small coaster light enables guests to signal their server to stop by to refresh drinks or bring more food. The check arrives about 40 minutes before the end of the show,

Customers order off a broad menu that features 13 burgers and chicken choices; 11 pizza options; four quesadillas; 13 appetizers; and four salads. Most items are priced very close to the $10 mark. There’s a full bar and wine list, too, with mixed drinks priced at $9.50 each and a 60-oz pitcher of margaritas going for $25.99. Popcorn? $3.49.

Admission to the movie is $8.75 on a weekend evening, so the overall price of a meal and movie experience at Studio Movie Grill is comparable to that of buying a casual dining meal from a full-service restaurant first, then taking in a show at a theater. Factor in the convenience of doing it all in one place and it’s no wonder this particular take on the concept has taken off in Texas.

From the operational point of view, staggered start times for these multiscreen movie venues keep the kitchen busy all night long. And the trio of revenue streams—food, drinks and theater admission—makes the economics work.

But the most recent segment entrant, Australian theater giant Village Roadshow, thinks a higher price point is the way to go. That’s what they’re doing at their Gold Class Cinema locations in South Barrington, IL, and Redmond, WA, where they’re taking the concept way upscale. Admission to the theater alone can be as much as $32 for a prime time weekend ticket.

The wine list includes top-notch offerings from the U.S., France and Italy. Dessert wine offerings, only two of which are under $100 a bottle, top off with a 2001 Chateau D’Yquem that goes for $695.

OK, there’ll be a big check at the end of the each customer’s meal. But what are the economics of a place like this? If it works as designed, they’re excellent. The Redmond facility, for example, has seven screening rooms with about 40 seats each. Popular movies have as many as 15 start times during the day, depending on demand. The kitchen and bar stay busy as the service focus rolls from one theater to the next, all of it pegged to the movie schedule.

There are nifty package deals, too. Consider the offerings for the current James Bond flick, “Quantum of Solace.” For $149, a guest receives 30 minutes of “cocktail time” while downing oyster, shrimp and lobster “spoons”; a salad martini featuring applewood smoked bacon, hearts of palm, artichoke and blue cheese crumbles with herb balsamic vinaigrette; a choice of Colorado West Slope Lamb Chops or Chicken Scaloppini filled with herb roasted wild mushrooms; and a chocolate bombe dessert, backed up by some Smirnoff Ice. A Smirnoff Quantum of Solace martini finishes off the evening. Plus, of course, the movie.

The $99 Coke Zero Package includes a Coke Zero and Bacardi drink to start the evening, a choice of the Wagyu Beef Burger duo or Beef and Arugula Pizza as the entrée, a second Coke Zero Bond beverage and a premium sundae for dessert.

These are pretty good deals from the customer’s perspective and fantasy material for the operator’s accountant. These prices—$149 and $99—are at the level of the finest tasting menus at white tablecloth restaurants, without the need for a costly celebrity chef, a flashy dining room or many of the other overhead costs that make fine dining so problematic these days.

Of course, you don’t want to be in this business if you pick the wrong movie to show, or can’t get access to the good ones until they are just about to become available on DVD. Which is why you may wish to contact the owners of Farrelli’s Cinema Supper Club, a Scottsdale, AZ, operation whose owners have branched out into the restaurant movie theater consulting business. They offer a $499 initial consulting package that will give you a realistic picture of your chances of success in the dinner-and-a-movie business, particularly on the movie procurement front. They’ve been in the business for seven years. Scottsdale, by the way, will soon have a Gold Class Cinema of its own.

Given the current rage for bargain hunting among restaurant customers, this concept could, in some form, work very well in some markets. We don’t know about the price points of Gold Class Cinema, but the notion of bundling together drinks, a meal and a first-run movie at one price looks like it could gain a lot of traction.
Recommended Reading