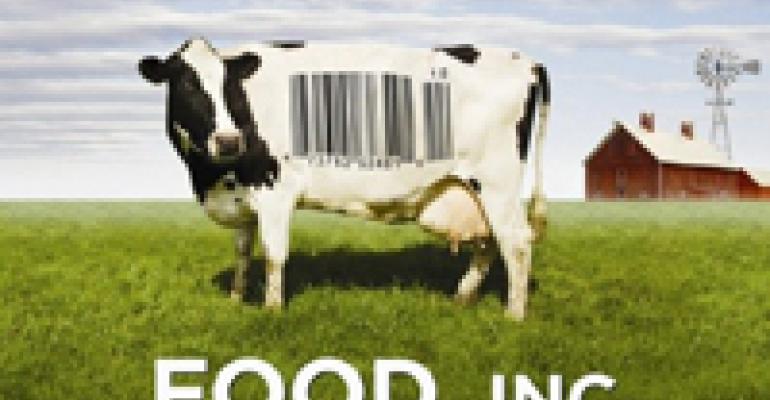 Step Aside, Shrek. Food, Inc. is Coming to Town

Restaurants have done movie tie-ins for decades, typically involving fast food giveaways and special kids’ meals—Shrek/Burger King and McDonald’s/Pirates of the Caribbean being two prominent examples. But fast casual burrito king Chipotle is taking this strategy in an unexpected new direction with its promotion of the documentary film Food, Inc., which blasts large-scale agribusiness and factory farming. And Chipotle isn’t the only chain thinking it can boost sales by linking up with food issue advocacy. The head of Jason’s Deli, a 200-plus-unit sub chain based in Beaumont, TX, is currently going around the country trying to stir up interest in eradicating childhood obesity. Have these two chains found a way to get ahead of the curve, and benefit from it?

Haven’t seen Food, Inc. yet? It’s done in the spirit of Sicko, Michael Moore’s takedown of the U.S. healthcare system, only director’s Robert Kenner’s litany of horrors describes the inner workings of the U.S. food industry. All the hot button topics raised by food advocates over the past decade—foodborne illness, diabetes and obesity, nutritional labeling of restaurant food, genetic engineering, cloning, pesticides, environmental damage and more—get the full treatment. Most gruesome of all are the lingering images of animals raised on industrial-scale farms.

High-profile food industry muckrakers Michael Pollan and Eric Schlosser handle much of the commentary, shrugging off the fact that large food producers have given U.S. consumers a cheap, abundant food supply that’s the envy of the world. How best to sum up the film’s message? “It does for the supermarket what 'Jaws' did for the beach,” says Variety critic John Anderson.

Food, Inc. is the kind of movie most restaurant operators would like to keep at arm’s length, But Chipotle Mexican Grille is embracing it, sponsoring free screenings in 32 cities across the country. The chain will also display the film’s promotional material in all 860 of its stores, and plans to include a bonus feature discussing Chipotle’s commitment to supporting sustainable agriculture when Food, Inc. goes to DVD later this year.

Chipotle says it entered into this partnership because of its long-standing “Food with Integrity” stance, which mandates buying products from sustainable sources whenever possible.

“I hope all our customers see this film,” says Chipotle founder, chairman and co-c.e.o. Steve Ells. “The more they know about where their food comes from, the more they will appreciate what we do.”

“We have an announcement! We are going to invite restaurateurs, academics and public health officials to a national summit on childhood obesity next year,” writes co-owner Rusty Coco in his blog. “We’re scheduled to visit several cities in the next few weeks to talk it up.” The schedule calls for 14 such visits, spread out among the 28 states in which Jason’s does business.

What’s the motivation here? Coco puts is this way.

“The Centers for Disease Control is telling us that nearly one out of three children in the U.S. ages 2 to 19 is overweight or at risk of becoming overweight. Unless we change this, we’re going to raise generations of really unhealthy kids. Kids and parents need to know more about the food they eat and how to eat healthier. As restaurant owners, we have a responsibility to do the right thing and help fight childhood obesity. We lowered the sodium, saturated fat and calories in our kids’ menu. We serve fresh, more natural, less fooled-around-with food.”

He told The Packer that he got the idea as he pondered ways to upgrade the menu at Jason’s. “I couldn’t believe some of the stuff that’s in food today that’s not good for you,” he says. “I couldn’t even eat at my own restaurant because I practiced healthy living.”

Are these two chains onto something? We’ll learn more as Chipotle’s movie screenings and Jason’s Deli’s nutritional summit planning move forward. What’s interesting for now is that these two chains, both of which have hundreds of units and do business all across the country, think the climate is such that food advocacy can give their restaurants a competitive edge. Stay tuned.