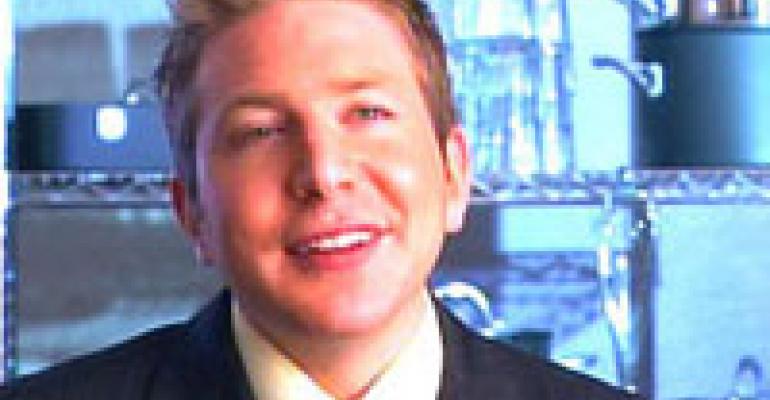 A RESTAURANT TO LOVE FROM A GUY YOU DON’T

Reality cooking show Top Chef scores monster ratings and spins off related ventures as fast as Bravo executives can ink the deals. But it’s been a failure as a culinary star-making machine. The contestants, household names among foodies nationwide while on the show, disappear once they’re off it. The lone exception: Season One’s Stephen Asprinio, the spaced-out sommelier who became the first in what turned out to be a series of chef/villains Top Chef audiences love to hate. But nobody’s hating his new restaurant, Forte d’Asprinio in Palm Beach, FL. It’s not just a fine place to eat; it also provides an object lesson on how any operator can attract a young and free-spending crowd.

Casting is already complete for Season Five of Top Chef, which starts shooting next month in Manhattan. But the show has become so popular that one more round of episodes just isn’t enough to meet demand.

How popular is it? The finale of Top Chef/Chicago attracted 3.5 million viewers, 2.5 million of them being part of the prized-by-advertisers 18-49 demographic. For the season, Top Chef was up 15 percent in total viewers (2.5 million average) and up 23 percent (to 1.8 million) in the 18-49 demo.

Such is the critical mass of viewership that the Bravo network and the show’s producers have been able to, as the marketers say, extend the brand by forming partnerships with purveyors of allied products and services.

Fans have always been able to purchase coffee mugs, T-shirts, hats and other Top Chef gear. But now there’s a cookbook, a cruise, Top Chef Junior (an 8-episode TV series featuring teens ages 13-16), Top Chef-branded cooking classes available through the Culinary Institute of America, and a Top Chef cruise that departs for the Mediterranean in May, 2009. Now touring the country on a 20-city tour is an 18-wheel tractor-trailer set up with professional cooking gear and staffed with a rotating cast of former Top Chef contestants. Think of it as the culinary world’s version of the American Idol tour.

In short, there’s a ton of money swirling around all things Top Chef. But not much of it winds up in the hands of the contestants. Only the winner gets a prize—$100,000. The others get momentary fame.

We know fame can help almost anyone go a long way in the food world. But until recently, only Season One winner Harold Dieterle, who opened a small restaurant, Perilla, in New York City last year, has made much headway in his post-Top Chef career. All the others—now nearly 50 chefs—remain where they were before appearing on the show: under the radar, or off it.

There is one exception. And it’s the last guy most people would have bet on becoming a food world star. We’re talking about Stephen Asprinio, the villain of Season One, who has opened a restaurant so good that both he and it appear poised for stardom.

Top Chef’s producers have been careful to include one cast member each season who is guaranteed to rub fans the wrong way. Asprinio was followed in this role by Marcel “The Wolverine” Vigneron in Season Two, always-irked Howie Kleinberg in Season Three and sourpuss-and-then-some Lisa Fernandes in Season Four. Ratings are better if the audience has someone to root against as well as for, and this quartet of chef-contestants more than filled the bill.

But none of them grated on viewers like Asprinio. He came to the show not as a working chef, like everyone else, but as a sommelier. He was employed at the time as wine director for Michael Mina’s Nobhill in the MGM Grand in Las Vegas. We learned later that he was also a graduate of both the Culinary Institute of America and Cornell’s renowned School of Hotel Administration. He was also the youngest person ever to pass the United States Sommelier’s Certificate Examination and one of the youngest to pass the Court of Master Sommelier’s Certificate Course. He had accomplished all of this at age 24.

On Top Chef, he came across as someone with an impossibly huge ego, even for a guy who had accomplished so much so fast. And he didn’t seem much concerned about winning or, for that matter, cooking. When other contestants would race through a store collecting ingredients for their meals, Asprinio, nattily attired in dress shirt and designer tie under his chef coat and hair moussed just so, would stroll dreamily through the wine department, looking for the best match for whatever food he had in mind. If his fellow contestants had asked him, “Hey, what planet are you from?” it wouldn’t have been in the pejorative sense. They’d really want to know.

As far as the fans were concerned, here’s our guess. If they ever conduct balloting for the all-time Top Chef “Fan Favorite,” Asprinio’s got a shot at coming in last.

But out in the real world, Asprinio’s self-imposed high standards turn out to be a valuable asset. Now 26, he’s a full-time restaurateur, and his new operation is one where favorable reviews have already begun to pile up.

Of course, he named it after himself. Forte d’Asprinio is a 175-seat contemporary Italian restaurant located in Asprinio’s hometown, West Palm Beach, FL. It offers a Las Vegas-meets-South Beach vibe. The wine cellar has 3,500 bottles, many of them reasonably priced. The food is fine dining all the way, but the prices aren’t. The most-expensive entrée goes for $25.

It’s the quality of the experience that has people talking, however.

“The food by chef de cuisine Mark Liberman was executed perfectly, the dishes were intelligent and delicious, and service was attentive, prices reasonable” is how former Restaurant Hospitality columnist Michael Ruhlman summed it up in his blog. “This is a modern Le Cirque for a younger generation” opined South Florida’s Closer magazine.

Asprinio has to be tickled by this latter quote, because that’s exactly what he was going for. Prior to opening, he was on the record as targeting the under-30 crowd. Part of his concept was to ensure a younger vibe by making sure that all staffers and managers were themselves under 30. They are, and it turns out there are plenty of customers in this particular demographic who have money to spend on food and wine and are willing to spend it if there’s a place that caters specifically to them. So many that Asprinio has already had talks about opening a second Forte d’Asprinio in Miami.

The guy even has a new TV gig lined up. He’s going to be the host of Wine Television’s Wine Chefs show, also geared to a hip, young crowd. It’s a smart move. If nothing else, Asprinio knows how to draw a crowd, whether to his own restaurant or to a new TV show. Unfortunately, we don’t see any other Top Chef contestants doing so well at either so far.
Recommended Reading