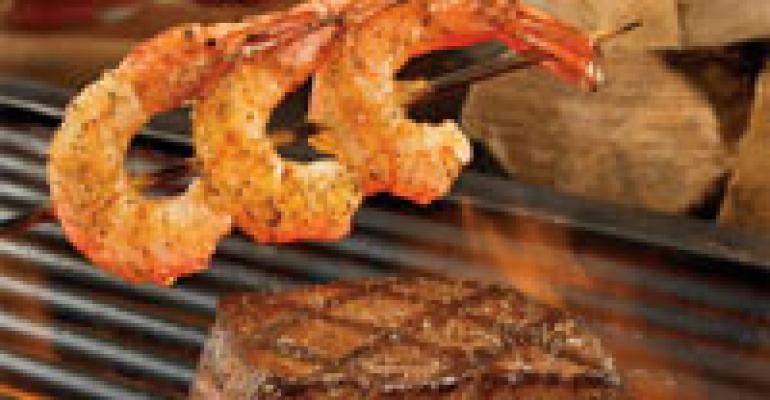 Outback’s Ultimate Deal Of The Day

Hmmm. Outback Steakhouse announces an unprecedented one million steak dinner giveaway just days after Darden-owned LongHorn Steakhouse reveals its plan to double its unit count over the next few years. It’s been quiet in the steakhouse segment of late; no more.

Outback is using the million steak giveaway, dubbed the Great Aussie Steak Out, to draw attention to its revamped menu. Those changes include a new cooking method—guests can now have their steaks flame grilled over oak—and new items including a Mediterranean Chicken Flatbread Aussie-tizer, an Aussie Chicken Cobb Salad and Hearts of Gold Mahi.

The giveaway is indeed a full steak dinner, albeit a two-course one. Included are a wood-fired six-ounce Outback Special Sirloin and the choice of one side dish. The idea is to underline the chain’s “continuing commitment to making ‘choice’ and personal preference key factors in striving to provide a best in class dining experience to all,” the company says.

Customers who wanted to score a free steak dinner headed to a dedicated website, www.outbackfreesteaks.com, as soon as news about the giveaway leaked out. There they typed in their zip code and were directed to a list of Outback units near their home. They had to be fast, though. Our search for free steak coupons in four much-different metropolitan areas early shortly after the giveaway announcement got meager results. The offer was sold out, except for two units in Orlando, where the chain operates 14 restaurants. In the other cities we searched, the free steak dinners were long gone. The consolation prize: a coupon for $5 off any two entrees at Outback.

The idea of a giving away one million free steak dinners seems crazy at first. But when you consider the minimal revenue restaurants receive when they offer deals-of-the-day from Groupon or LivingSocial, this steak giveaway might make sense. We can see how it might break even, or perhaps be a net moneymaker on a weekday night. It’s good advertising, for sure, and the $5-off coupons could lead to further trial of the chain’s new offerings.

Outback might need to motivate its customer base to fend off a big push from a rival steakhouse chain. LongHorn Steakhouse President Dave George said in interviews this week that parent company Darden would speed up expansion at what is currently a 356-unit chain. The eventual goal: somewhere between 600-800 LongHorn units across the country.

Right now, Outback Steakhouse controls 16.5 percent of the steakhouse market, Texas Roadhouse 9.2 percent and LongHorn about seven percent, says Technomic. Look at a map of current LongHorn units and you can see where the next wave of company growth is likely to occur. Right now, the westernmost Longhorn outposts are in Texas, Oklahoma, Kansas, Iowa and Wisconsin. West of those states, there are no LongHorn units whatsoever.

There will be soon, and expectations are high at Darden. The company is telling stockholders it sees LongHorn as a key driver of growth going forward. “LongHorn still has this long runway of growth available to it,” says George. One key: while LongHorn will be a new brand in many of the markets it enters during its drive west, Darden corporate has intimate knowledge of the dining needs and habits of customers in those markets, thanks to the ubiquity of its Red Lobster and Olive Garden brands. Expect LongHorn to get up to speed in new markets at a rapid clip.

Outback parent company OSI Restaurant Partners indicated in its conference call with debt analysts earlier in August that current ownership is contemplating going public once again. OSI was at one time, but was taken private in 2007.

There’s no fixed timetable for this move, OSI CFO Dirk Montgomery told the analysts. But its possibility helps explain some of the thinking behind Outback’s one million steak giveaway. The chain has to regain momentum before LongHorn goes into expansion mode. You can bet Outback’s current owners, concerned about the payoff on their investment in OSI, hope this big splash will lead to an IPO sooner rather than later.