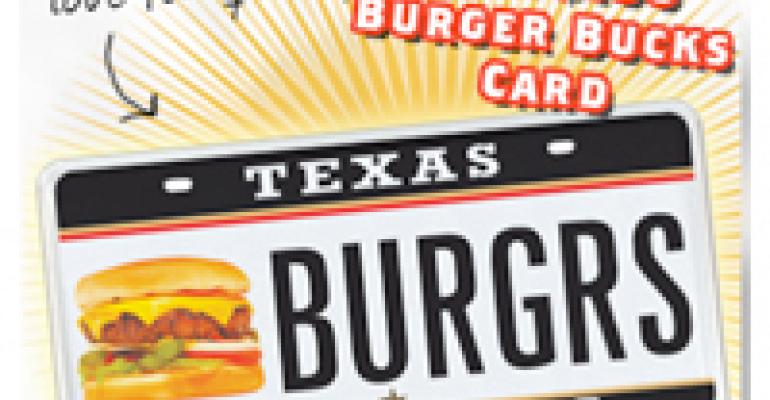 Market Your Restaurant With Vanity Plates

Check out how this burger concept used an unusual marketing plow to publicize its business.

How’s this for marketing brilliance: Austin, TX-based Mighty Fine Burgers rewards customers who buy license plates customized with its logo with a $100 in-store credit. It’s a low-cost way for the three-unit chain to get nonstop mobile advertising while also forging strong ties with the people who buy the plates. Could something similar work in your state?

Right now, Texas is the only state in the nation with a custom plate program for commercial entities. Participants so far include real estate company RE/Max International, wind power generating company Vestas and Ford Motor. Each has paid the state $5,000 for a custom license plate design, just as Mighty Fine Burgers did.

From there, the companies encourage people to buy customized plates through website which has an exclusive contract with the Texas Department of Motor Vehicles. The site handles the entire vehicle registration process including the plate sale, keeping 35 percent of the fee.

What’s it cost? Customers have several options. In Mighty Fine’s case, the charge can be as high as $595 for a personalized license plate that’s good for 10 years. That fee represents a 69 percent savings over the single-year fee of $195 for vanity plates in which the customer gets to specify the letter and/or number combination on the plate. A five-year commitment is available for $495, a 49 percent savings over the base fee. For $55, customers can have a no-frills version bearing the restaurant’s logo and name plus a randomly chosen combination of letters and numbers.

Here’s how Mighty Fine pitches the program on its website:

A deal, indeed. That’s $1,000 worth of restaurant food for those who front the $595 for the 10-year plate deal. “We think it’s going to take off,” a spokesperson for Mighty Fine told the Austin American-Statesman. “We’ve actually had a lot of interest already, even though we haven’t started promoting it yet.”

As marketing programs go, this one seems hard to beat. There’s plenty of initial buzz already, and Mighty Fine is going to, in some cases, get 10 years of exposure for a relatively small investment. That’s an eternity as restaurant promotions go.

So can restaurant operators elsewhere get in on this act? Now that Texas has changed the rules, other budget-strapped states are considering the idea of offering a similar program of their own. Likely early adopters include Illinois, Florida and Virginia.

Once the revenue numbers on the Texas program become public, you can expect these and other states to approve a vanity plates program that taps into this new source of money fast. If your restaurant is located in one of them, we suggest taking a close look at the benefits such a program might produce for you.