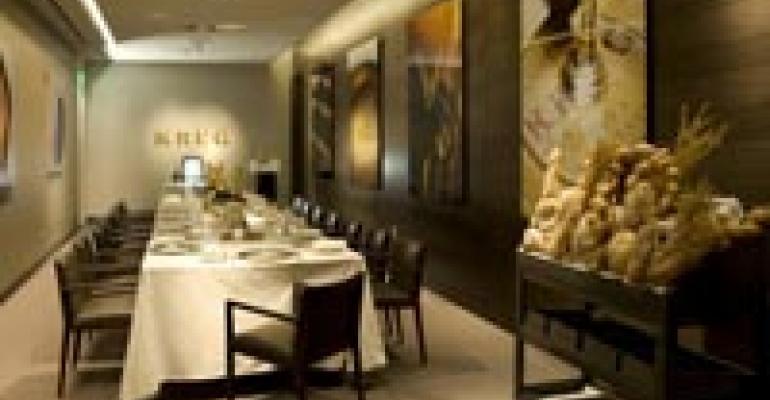 Your Logo Here: No Funk in the Trunk at Restaurant Guy Savoy

Whether you call it a marketing partnership, cross-branding or product placement, Restaurant Guy Savoy at Caesars Palace Las Vegas has discovered a no-cost way to keep customers and money rolling in during the current slowdown: have a foodservice supplier sponsor part of the restaurant. If a three-Michelin-star chef like Savoy thinks this move doesn’t dilute his restaurant’s image, what’s stopping you from doing the same?

Whether he’s cooking at his namesake restaurants in Paris or Las Vegas, Guy Savoy stands at the very pinnacle of the culinary profession. But even a chef at his level has to keep the money flowing in, troubled times or not, and Savoy’s willing to experiment with new revenue streams to help ensure that it does.

Consider his latest gambit. Just last week, he opened the Krug Room at Restaurant Guy Savoy at Caesars Palace Las Vegas. It’s a private dining room where patrons feast on a six-item menu (a scaled-down version of the 10-item “Menu Prestige” tasting menu served in the restaurant’s main dining room) that’s paired with vintage champagnes from France’s legendary House of Krug. The Krug champagne dynasty has previously opened Krug Rooms in London, Tokyo and Hong Kong; this is their first one in the U.S.

The Krug Room at Guy Savoy is designed to serve as few as six or as many as 30 guests. Its stylish design is contemporary, but features a large “KRUG” logo on one wall and artful Krug-brand pictures and accessories throughout. As promotional intrusions go, this one’s relatively subtle. But no one’s going to miss the Krug connection.

The food includes such iconic Guy Savoy dishes as Colors of Caviar, Artichoke with Black Truffle Soup and Crispy Sea Bass. Guests wash it all down with Krug vintages drawn from the 1985-1995 time period, some of which command as much as $75 a glass when purchased individually elsewhere. The atmosphere is intended to be one of privacy and glamour, but we’re guessing that if customers actually consume all six of the proffered champagnes, a rollicking good time will be had by all.

All that champagne may well soften up some of the patrons and put them in the mood for some retail therapy, which is the second part of the Krug/Savoy experience. Once guests complete their meal in the private Krug Room and head back into Restaurant Guy Savoy proper, they can do a little shopping before they leave.

Of course, you won’t find cheesy t-shirts or logo mugs for sale at Guy Savoy. Instead, there’s only one item, and it further extends the Krug brand. It’s the Krug Trunk, and it houses “a chic collection of culinary and beverage accessories that might be associated with royal picnics.” The trunk is meant to solve the vexing (for some) problem of how to cart one’s champagne collection around the world, especially if you contemplate picnicking on its contents somewhere along the way.

Actually, the idea is that one’s butler or driver will do the actual carting around. The thinking is that people who have $54,000 to spend on a limited-edition picnic trunk (only 30 pieces will be made) likely employ a butler or driver who are used to doing the heavy lifting anyway. And don’t worry; the Krug folks leave space on the door for each purchaser’s name and/or coat of arms, which will be reproduced in nickel-plated lettering.

The trunk also features a red calfskin interior, a dark-brown “foal effect calfskin exterior” and corrosion-proof corners, hinges and handles. It comes with three bottles of Krug Grande Cuvee champagne, an artist-designed ice bucket and a staggering array of culinary tools, including such necessities as a truffle grater and mother-of-pearl caviar spoons.

There’s more. “Another ingenious feature is that the trunk lid folds out to make an elegant table, while a wool and cashmere tablecloth, fine china and four leather stools appear as if by magic, ready for a sumptuous picnic, or an impromptu celebration,” says the maker, noting that it takes 700 hours to manufacture these units by hand.

We don’t know the financial terms of the Guy Savoy/Krug cross-branding effort, but we’re guessing that a placement like this in a restaurant like Savoy’s costs a lot. Money aside, both sides stand to gain a lot by tapping into the promotional power of the other’s unassailable brand name.

Of course, this kind of over-the-top luxury partnership doesn’t make sense for most restaurants. But the business principle at work here could have wide application. Oceans of marketing and promotional dollars flow through foodservice, even now. Savoy, through his sponsorship deal, is showing other operators how to get a piece of this action. The next time a foodservice manufacturer or beverage company wants to become an exclusive supplier to your restaurant, ask them if they’d like to sponsor a part of your restaurant instead. Many restaurants feature manufacturer logos on their menus; why not sell them something even bigger and better?