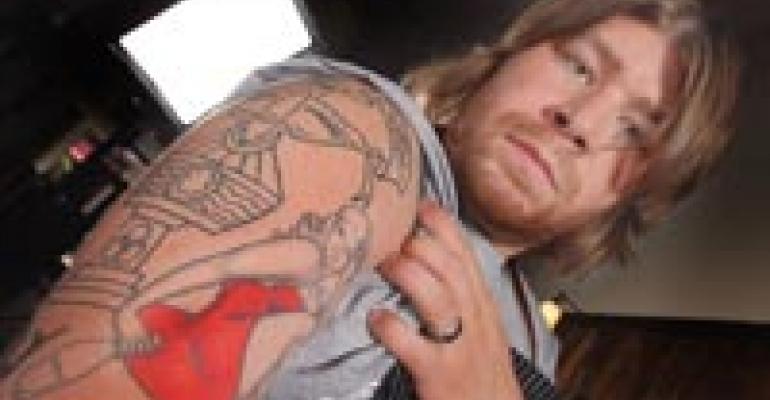 So, who is that chick tattooed on your arm? “That’s Amelia, my wife.” She’s beautiful. “Yeah, but she has bigger boobs on the tattoo than she does in real life.” Why’s that? “It gives me something to look at (he laughs).” No offense, but your wife is pretty healthy in the boob department. “I know, I’m weird, but Amelia gets a kick out of it.” [check out Amelia’s blog: www.chefswidow.com] You’ve got a lot of other ink on that arm. “Yeah, I have a bunch. They were done by Natalie Roelle at Voodoo Monkey. She’s done the tattoos of a lot of chefs here in town.” What else is on your arm? “I have the names of my two goddaughters on there, along with the cover of Catcher in the Rye (J.D. Salinger’s novel of teenage rebellion and defiance). I love that book.” You love it so much you named your son Catcher. “Yeah, and I also love Jeff Buckley’s song, Hallelujah, which I have tattooed on my wrist. It’s our wedding song. They’ll probably play it at my funeral, too.” Let’s hope that’s not for another hundred years, brother.