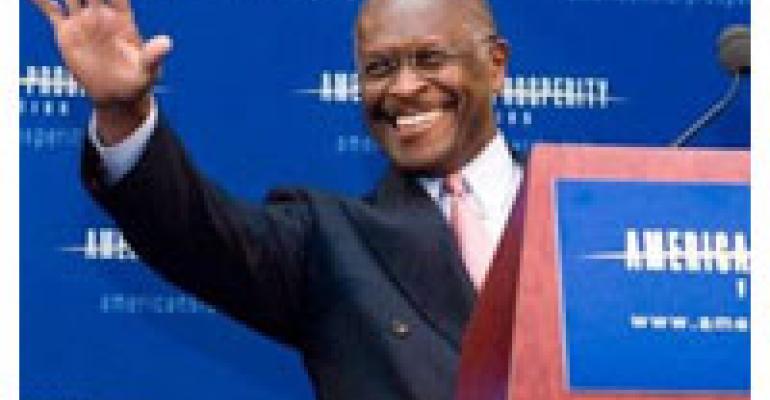 Step aside, Sarah Palin, Mitt Romney and other Republican president hopefuls who have their eye on their party’s 2012 presidential bid. Herman Cain, longtime c.e.o. of Godfather’s Pizza and former head of the National Restaurant Association, wants it, too. He’s a Tea Party favorite with a media platform and, if you’ve ever heard him give a speech, you know there’s a reason they call him the “Hermanator.”

Cain announced last week that he was forming a presidential exploratory committee, which means he’s serious enough about running to gauge his level of support. Even prior to this announcement, there was a www.draftcain.org website that was using the Internet to stir up interest among potential backers

Right now, few people know who Cain is, what he stands for and why he thinks he could be president. But the man has a distinguished business background, most of his achievements coming in the restaurant industry. Early on, he was head of a 450-unit Burger King region, next he resurrected the then-moribund Godfather’s Pizza chain, later leading a management buyout of it.

During this period, Cain was elected volunteer chairman of the National Restaurant Association for a year, following that up with a term as full-time president and c.e.o. of NRA. Later, he served on the board of directors of the Federal Reserve Bank of Kansas City, eventually becoming chairman.

Today, he hosts a radio talk show and keeps a busy speaking schedule. His basic stance is pro-small business, pro-entrepreneur—music to the ears of most restaurant operators. The other candidates better hope Cain doesn’t get very far along the campaign trail, because nobody wants to share a podium or be trapped in a debate with this guy. People might or might not like the political positions Cain takes, but everyone is going to be mightily impressed by his oratorical skills.

So what are those political positions? Here’s the opening salvo Cain posted on his www.hermancain.com website:

“Welcome to the new HermanCain.com, home to my presidential exploratory committee. Here, you will find all of the important information necessary to keep up-to-date with my decision-making process as I continue to determine how God wants me to best serve our great nation.

“The American Dream is under attack. In fact, a recent survey found 67% of the American People believe America is headed in the wrong direction. Sadly, this comes as no surprise to those of us who have watched an out-of-control federal government that spends recklessly, taxes too much and oversteps its Constitutional limits far too often.

“While our country faces grave and complex problems, America is not lost forever. The glory of the American Dream can still be found in the hearts of those who love Her and the promise of freedom She guarantees.

“America is an exceptional nation. America is the greatest idea any man has ever imagined. America is the noblest endeavor humanity has ever known. It is because of this that we have the obligation to preserve the American Dream for generations to come.

“President Ronald Reagan once said: ‘Freedom is never more than one generation away from extinction. We didn’t pass it to our children in the bloodstream. It must be fought for, protected and handed on for them to do the same, or one day we will spend our sunset years telling our children and our children’s children what it was once like in the United States when men were free.’

“Fellow patriots, now more than ever, we must come together to take a stand for the future of America. I make this promise to you as I deliberate the ways in which I can do my part to restore and protect the American Dream: I would be the voice of the American People. I will keep you in my thoughts and prayers. I ask you to do the same for me.”

We don’t know how well Cain’s message will resonate with voters. But for those Republicans who think their current roster of candidates has too many familiar faces and not enough new ones, Cain might be worth a serious look.