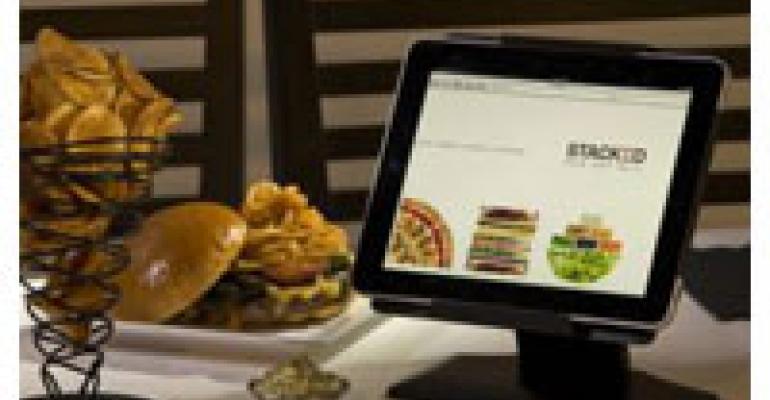 Could Apple’s iPad make your flesh-and-blood servers obsolete? New “fast casual plus” chain Stacked is going to find out, because its customers can only order and pay for their meals using the device. A pair of high-powered operators, not tech-crazy kids, are behind this concept.

The Stacked concept is the brainchild of Paul Motenko and Jerry Hennessey, the duo who in 1978 co-founded the casual dining concept now known as BJ’s Restaurant and Brewhouse. Huntington Beach, CA-based BJ’s has grown to become a publicly traded company that numbers 106 units. The chain has expanded beyond its California roots to establish a near-national footprint.

Motenko and Hennessey don’t run BJ’s any more, but their restaurant instincts are still sharp. Their new concept is Stacked, which relies on technology—specifically, iPads that reside on each unit’s 60 tables—to handle most waitstaff chores. Customers use the interactive devices to individually tailor and place their food order and, later, to pay their bill. Motenko and Hennessey see the resulting experience as falling somewhere between fast casual and pure casual dining.

“Stacked defies existing categories and will elevate fast casual dining to a new experience we are calling ‘fast casual plus,’” Motenko says. The still-to-be-announced menu will feature burgers, pizzas and salads, all of them readily customizable via the iPad. Drink options will range from beer and wine to milkshakes.

The first Stacked is set to open in May at the Del Amo Fashion Center in Torrance, CA. It will reside in a 6,300 sq. ft.-space that seats 160 guests. Unlike the handful of restaurant concepts that already use iPads as menus or wine lists, passing a small number of them around between customers, Stacked is placing the devices permanently on tables.

The debut Stacked unit will be equipped with 100 iPads. So will the second and third editions of the concept. Those restaurants are set to open later this year at Fashion Valley Mall in San Diego and at the Los Cerritos Center in Cerritos.

It’s a great gimmick, but these two restaurant veterans know that while a gimmick will get you trial, it’s food and service that bring the customer back.

“The key for us has always been for the technology to facilitate the experience,” Motenko says. “Regardless of why people walk in for the first time, it’s up to us to provide an experience that makes them want to come back.”

One hundred iPads is a sizable up-front investment, but subsequent reductions in labor costs and menu printing expenses should mitigate this cost.

You may be wondering if Apple, set to reveal the new iPad 2 on March 2, is giving Stacked a deal.

“They are very excited about what we are doing and will probably help us in a variety of ways,” Motenko tells Fox News. “What is more significant to Apple is the number of people who will be exposed to using the iPad in our restaurants. We are expecting about 7,000 customers a week, per restaurant, using an iPad—that is an awful lot of exposure.”

Indeed, It’s also an awful lot of customers. If Stacked does anywhere near 1,000 customers a day—that’s six table turns—you can bet you’ll see still more technological innovations in restaurants pop up in a hurry.