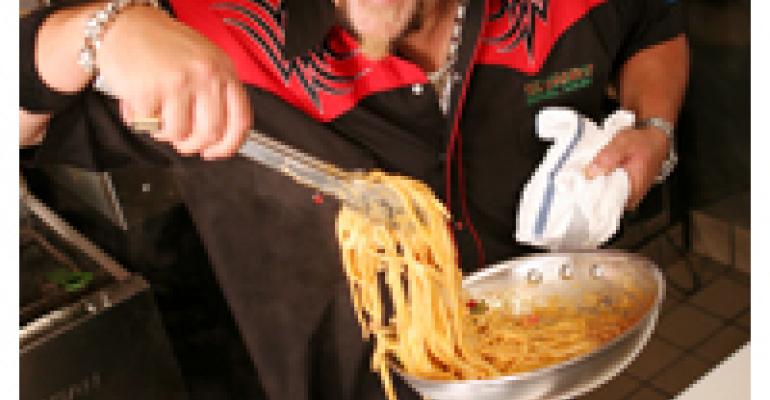 Guy Fieri Takes it on the Road

Perhaps out of necessity, details about the actual content of this fall’s 21-cities-in-30-days Guy Fieri Roadshow are a little sketchy. His PR handout describes it as a “two-hour food-a-palooza modeled after a high-energy rock concert, including Guy’s traveling from city to city on two tour buses with his culinary krew.” But give the man some credit. While other chefs are happy to leverage their restaurant success into TV shows, Fieri’s among the first to take his TV fame to the next level: personal appearances in concert halls. It’s the ultimate gig for a chef: he’s cooking for thousands of people, they’re paying a bundle to watch him do it, and he’s not responsible for feeding any of them once the show is over.

The ambitious Fieri has been on a tear ever since winning the second season of “Next Food Network Star.” His three television shows run concurrently on the Food Channel, with “Diners, Drive-Ins and Dives” pulling the highest ratings. Both his restaurant concepts (Johnny Garlic’s and Tex Wasabi’s) have multiple locations in Northern California. And his second book hits the stores this November. If his personal appearance tour works out, Fieri will be the King of All Media as far as the food world goes.

That could be a big “if,” because the Guy Fieri Roadshow will be breaking new ground on several fronts.

Key among them: pricing. Fieri’s fans are going to have to pay plenty to watch the man cook. He’s booked into some classy venues, most of them theaters in the 2,000-5,000 seat range. Tour tickets went on sale late last week on Ticketmaster, with prices as high as $250 for the “Off Da Hook” package.

“Seat on stage, tour laminate, new edition of More Diners, Drive-Ins, Dives: A Drop Top Culinary Cruise Through America's Finest and Funkiest Joints, 2 squirt bottles and pre-show meet and greet.” The primary benefit appears to be that the ticket-buyer is close enough to see what’s going on and, because they’re on stage, might even get a taste of Fieri’s cooking. That’s something purchasers of the $150 Kulinary Krew package probably won’t get. They receive the same benefits as Off Da Hook tickets buyers, except that their “premium” seat won’t be actually on the stage.

Sound expensive? Hey, check out what regular seats are going for on the Internet ticket broker sites. Front row at the 11/21 Raleigh, NC show can be had for $100. It’s $83 apiece for two tickets in Row K at the Chevrolet Theater in Wallingford, CT on Nov.19. When we looked yesterday, the highest price was $336 each for four seats in Row AA Orchestra 5 at the Gibson Amphitheater in Universal City, CA on Dec. 17. If you don’t get out to many rock concerts these days, be aware that these prices are in the range of what Bruce Springsteen or an Eagles reunion might charge, less than what the Jonas Brothers get.

People paying these kinds of prices will expect a dynamite show, especially because they’re going to have to buy their own meal beforehand. So what does Fieri have in mind?

“We’ve been test-driving this concept on a smaller scale and the adrenaline of the crowd is through the roof,” Fieri says. “ Putting on a show for my fans that marries food and rock n’ roll with blow-your-mind entertainment is a dream come true.”

The show begins with a warm-up act, Australian-based flair bartender Hayden "Woody" Wood. Next comes a demo from a celebrity chef located in the evening’s host city. Then, say Fieri’s PR contact, “Guy will take center stage with an unscripted and wildly entertaining performance, complete with interactive cooking stations, demos, behind the scenes stories from the road and more.”

It sounds like a fun night, although we’re not exactly sure how directly it relates to the experience of a high-energy rock concert. But we hope Fieri has it figured out, because he’s got plenty of seats to fill as he travels across the country on his tour bus. The Roadshow starts on Nov. 17 in Lowell, MA, and concludes on Dec. 19 at the House of Blues in Las Vegas. In between are some challenging dates. Fieri has to fill 2,750 seats at the Cobb Energy Center in Atlanta on Nov, 23, the Monday night before Thanksgiving. And let’s hope a snowstorm doesn’t hit Milwaukee on Wed. Dec. 2, when Fieri plays the 2,500-seat Riverside Theater in Milwaukee. Even the finale in Las Vegas might be a challenge, since the week before Christmas is often the slowest week of the entire year in that town.

But who’s to say that the energetic Fieri won’t pull it off? If he does, he’ll be part of a select group. We can only think of one other chef, Bobby Flay, who’s done something similar. But Flay did his mega-demo in the main show room of a casino at Niagara Falls, was a one-off event. Fieri’s taking it to the next level, and you can bet other superstar chefs will be watching to see if he pulls it off.

As for everyone else in the restaurant world, if you’re wondering if it would be worthwhile to invest in some media training and develop a personal brand that revolves around your restaurant, check out what Fieri is doing here. There’s no reason you couldn’t be next.