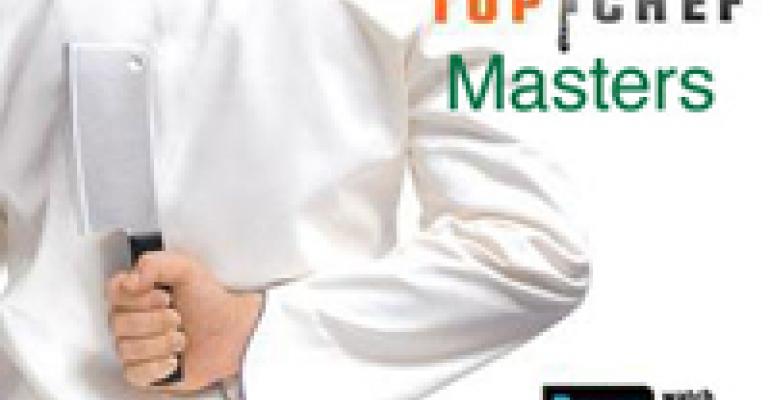 It’s too bad TV shows like Top Chef and Hell’s Kitchen can’t last forever. They’ve been the full-service restaurant segment’s best friend, keeping potential customers excited about creative food and producing a nonstop parade of aspiring culinary talent who thinks kitchen work is a cool career choice. But both these shows are five years old—ancient by TV standards. We hope the next round of restaurant shows—the promising Top Chef Masters and the currently-in-limbo Chopping Block—keep the ball rolling. We need all the help we can get to keep restaurant dining top of mind for consumers in this flaccid economy.

Chopping Block, helmed by superstar British chef Marco Pierre White, debuted in prime time in mid-March on NBC, but was pulled from its 8 p.m Eastern slot before the month was out. The network’s stated reason: low ratings. True enough, but the content also had TV critics scratching their heads.

White, the show’s host, was a three-Michelin star chef in England before he voluntarily gave them up. He’s still a huge presence there, but is almost unknown in the U.S. Which would have been ok if White had brought his once-oversized personality with him when he made the jump to U.S. TV. After all, he was for years regarded as the baddest of the bad boy chefs and is famous for being the guy who made then-underling Gordon Ramsay cry! But White has toned it down, way down, as of late.

As he told the British press when he gave up his Michelin stars in 1999, “I was being judged by people who had less knowledge than me, so what was it truly worth? I gave Michelin inspectors too much respect, and I belittled myself. I had three options: I could be a prisoner of my world and continue to work six days a week; I could live a lie and charge high prices and not be behind the stove; or I could spend time with my children and re-invent myself."

Serious reinvention ensued. On Chopping Block, a kinder, gentler White presided over a show on which eight couples competed in a pair of side-by-side New York City restaurants, with the last couple standing getting a restaurant of their own as the prize. Every episode featured the guaranteed chaos of twin opening nights, and the fun was in seeing which one went worse. But instead of blowing his stack and breaking out the F-bombs a la Ramsay when things went poorly, White went for measured advice instead. The result: a lack of drama and internal tension that made the show fall flat.

So which of the competitor couples won the restaurant? We don’t know and the network isn’t telling. Chopping Block was yanked after just three episodes, so we’ll have to hope it resurfaces elsewhere. NBC has indicated it will show the rest of the episodes eventually. The most likely spot: the NBC-owned Bravo network, perhaps during the summer rerun season.

But it won’t be the highest-profile restaurant-related show on Bravo if and when it airs. That honor will be reserved for Top Chef Masters, which will debut on June 10. Its format: big-name chefs from all across the country cook against one another in a series of judged competitions, with whoever prevails earning the title “Top Chef Master” and a $100,000 prize for the charity of the winner’s choice.

The show is from the same group that produces Top Chef. They’ve lined up a distinguished crew of participant-chefs, many of whom have served as judges on the Top Chef series. The format calls for six initial episodes, each of which will feature four chefs cooking head-to-head in both a quickfire and elimination challenge. One of the four will emerge and earn their way into the finals. The six chefs who prevail will battle during the final four episodes until all but one has been eliminated.

So who signed up? The competitors are:

It’s quite a list. These are the leading lights of the chef-driven restaurant world, and almost every one of these participants has a lot to lose if they come off poorly on the show. Which is what will help give Top Chef Masters the dramatic tension it needs to capture and hold an audience.

In the original Top Chef, participants are up-and-comers who hope their appearance on the show at least gives them their 15 minutes on fame, with the overall winner becoming a permanent quasi-celebrity in the food world. On Top Chef Masters, almost all of the participants are already famous and have been so for a long time. They face the challenge of living up to the hype that has built up around them during their careers.

We don’t know how this show will play out for the general public, but we’re sure almost everyone in the food world will watch every episode. There may even be gambling, with foodies drawing up brackets like the NCAA basketball tournament and offering prize money to the person that picks the winner.

It’s certainly a programming coup for the Bravo network and a genius move by the show’s producers, who have been casting about for a way to leverage the Top Chef franchise. They seem to have found it with Top Chef Masters, and we think it’s going to do plenty to keep the general public excited about chef-driven restaurants.