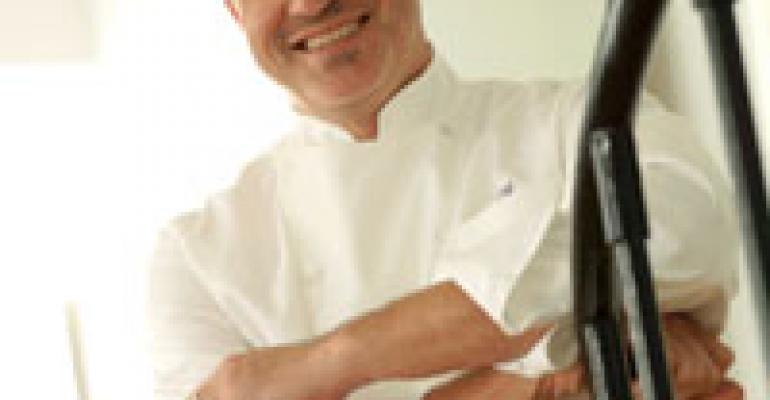 Colicchio Inducted Into Hall of Fame

MenuMasters Awards are produced by Nation’s Restaurant News and sponsored by Ventura Foods. They honor outstanding menu development plus excellence in foodservice research and development. Awards will be presented at the Drake Hotel.

Randall Friedman, vice president of the Penton Restaurant Group, which includes NRN, Restaurant Hospitality and Food Management, said, “The MenuMasters Awards are the industry’s most recognized and inspiring culinary awards program. It is a privilege for Nation’s Restaurant News to honor these outstanding culinarians. This year’s winners have had a significant impact on their restaurant segments and their creativity and innovative approach to menu development is admirable.”

The following awards and honors will be made at the May 21st celebration:

Hall of Fame Inductee – Tom Colicchio, chef/owner Craft Restaurants, Colicchio & Sons and ‘wichcraft.’ Tom Colicchio spent his childhood immersed in food, cooking with his mother and grandmother. He taught himself to cook with the help of Jacques Pépin’s legendary manuals on French cooking. He later cooked at prominent New York restaurants, including The Quilted Giraffe, Gotham Bar & Grill, Rakel, and Mondrian.

In 1994, Colicchio and his business partner, Danny Meyer, opened Gramercy Tavern in Manhattan’s Gramercy Park neighborhood. Colicchio’s cooking won consistent recognition, garnering three stars from Ruth Reichl of The New York Times and earning him The James Beard Foundation’s 2000 Best Chef-New York Award. In 2001, he opened Craft, earning three stars from The New York Times, and The James Beard Foundation Award for Best New Restaurant in 2002. Along with Crafts’ casual sibling, Craftbar, established in New York, he set out to expand his simple, elegant brand of cooking. He has since opened Craftsteak at the MGM Grand in Las Vegas (2002), Craft Dallas (2006), Craft and Craftbar in Los Angeles (2007, 2009), Craftsteak at the MGM Grand at Foxwoods (2008), and Colicchio & Sons and Riverpark in New York (2010).

The first ‘wichcraft sandwich shop opened in New York in 2003 and now has 14 New York City locations, as well as stores in Las Vegas and San Francisco.

In May 2010, Colicchio was awarded The James Beard Foundation’s coveted Outstanding Chef award, the culmination of his 30 years of hard work in the restaurant industry.

Innovator - Scott Davis, Executive Vice President & Chief Concept Officer, Panera Bread, St. Louis, Missouri. Davis is working on the next generation bakery-cafe for Panera, which operates 1,453 company-owned and franchise-operated bakery-cafes in 40 states and Ontario Canada. For this project, he is drawing on earlier experiences at Panera and also his time with St. Louis Bread Co. where, in 1996, he spearheaded the creation of their new prototype bakery-café. He joined Au Bon Pain Co. as a Store Manager in 1987. In 1993 he became New Concept Manager and led the development of the company’s Choices concept. In 1995, he was tapped to create an R & D team for Saint Louis Bread Co. He was named Director that same year and has since led the Panera Concept Team.

Menu Revamp - Old Chicago pizza-pub, Louisville, CO. With 100 restaurants in 23 states, this chain launched its largest menu overhaul since 2004, adding or tweaking roughly 30 menu items. Rolled out in June 2010, the overhaul streamlined the menu, making it easier to execute. While the chain removed 22 items, revised 13 and added 17 new ones, customers will find that pizzas, burgers, sandwiches, calzones, pasta and salads still reign. Left undisturbed was the signature line-up of over 110 beers.

Healthful Innovations – Build Your Better Breakfast, Subway Restaurants, Milford, CT. In the QSR breakfast competition, Subway raised the bar in its U.S. and Canada locations with an egg white version of its successful omelet egg and a new egg muffin melt sandwich line. These innovations had an impact with breakfast now accounting for 9 percent of overall sales, up from 7 percent in April 2010.