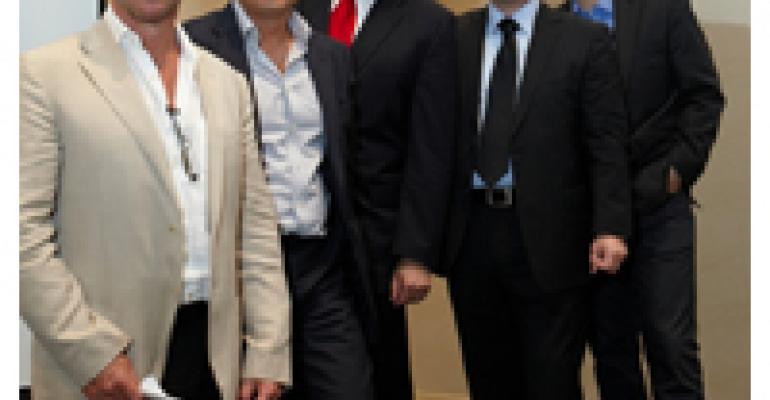 Celebrity Chefs Come With a Price

Hire a celebrity chef or run your own food & beverage operations? That was the question debated during a panel at the second Lifestyle/Boutique Hotel Development Conference at the Fontainebleau in Miami Beach.

There was no conclusive answer, but the panel, moderated by RH Editor Michael Sanson, agreed that although celebrity chefs could bring the buzz needed to a successful boutique hotel, they also came with a higher price tag and other potential risks.

Antoni Yelamos, the f&b director for the W South Beach, hired an up-and-coming young Spanish chef named Marc Vidal, but as his celebrity began growing, so did his ambitions. He left after eight months.

For Tim Dixon, the owner of the Iron Horse Hotel in Milwaukee, the concern was over dividing the staff and losing the continuity he has with Desires Hotels running the entire property, including all five f&b outlets. Dixon said even during preliminary discussions with several celebrity chefs—including Iron Chef and James Beard Foundation Award-winner Michael Symon—the relationship became almost contentious when talked turned to the potential division between hotel and restaurant operations.

“Having someone else’s people over my entire first floor?” Dixon pondered. “I was afraid of those contentious relationships and confusing the experience for the guest. You’ve got to have a consistent story and experience. I’ve got 66 employees on the first floor who represent my hotel. I didn’t want to risk mixing two cultures.”

Albert Charbonneau, the director of f&b at Miami’s Viceroy Hotel, said the idea of bringing a big-name chef to a hotel began about 20 years ago in an effort to overcome the quiet and negative reputations of the typical hotel restaurant. The Mediterranean-inspired Eos at the Viceroy is celebrity by all definitions.

Its chef Michael Psilakis, was named a “Best New Chef” by Food & Wine and “Chef of the Year” by Bon Appetit in 2008. Restaurateur Donatella Arpaia is a culinary personality often featured on the Food Network. Even the restaurant’s designer, Kelly Wearstler, has been a Top Design judge on Bravo.

Charbonneau has been pleased with the results, especially from the marketing and public relations perspective. “Anytime I need Michael, I ask and he is available.”

Steven Rauscher, the director of f&b at The Tides South Beach has taken an approach somewhere between Dixon and Charbonneau. He doesn’t have a celebrity in Gonzalo Rivera, but the talented chef is still promoted as the face of The Tides’ restaurant, La Maria. “A celebrity chef without the ego,” explained Rauscher.

Yelamos, who was burnt by the departure of Vidal, said he’s in conversations to bring in another celebrity chef to the W. “But it has to be right,” he said. “There’s no doubt hiring a celebrity chef will cost more, but you have to have the same philosophy as the chef.”

Sure, he says, handling the ego of a celebrity can be a challenge, but that’s the point. “Having a celebrity chef with a big personality is why you have one.”

For some, the reward is worth the risk. For others, it’s not.

Dixon’s f&b revenue matches his room revenue, at the hotel recently honored as the boutique of the year, without the challenge of an outside operator and the ego and price of a celebrity chef. The Iron Horse features a talented local young chef, but one happier in the kitchen than on TV. The hotel itself, a favorite among motorcycle enthusiasts, business travelers and locals, has become the celebrity.— By Eric Stoessel