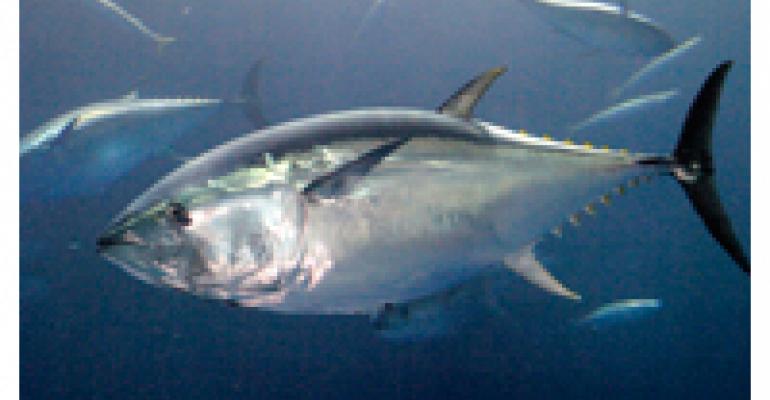 Serve bluefin tuna at your restaurant? Then you know the market for it seems insatiable, no matter how stratospheric your menu price might be. So what will you do if and when this hot-selling customer favorite lands on the endangered species list? Check out how they’re getting ahead of the issue at Paul Kahan’s gastropub The Publican in Chicago. He’s got a nifty plan. Do you?

The highly prized bluefin tuna has gradually become overfished over the past few decades, with the estimated 295,000 tons of it that populated the world’s oceans in 1970 falling to 136,000 tons today. It’s not on any endangered species list yet. But several nations, many of them in the European Union, have called for bans on bluefin tuna fishing and have asked for additional restrictions on the commercial fishermen who harvest it. “Right now we have a catch quota which is still almost twice the level needed to recover the stock,” bluefin tuna expert Sergi Tudela tells New York magazine.

So far, the save-the-bluefin effort is a movement, not a law, but fishery experts say that some sort of law or regulation might be next. Bluefin can be bred in captivity; the Kindai variety is supplied this way, but costs about three times as much as wild-caught.

Here’s the question this situation creates for restaurants: If your operation emphasizes sustainability, what do you do about bluefin right now?

The Sushi Samba group of restaurants has simply taken bluefin tuna off menus at its restaurants in New York City, Miami, Chicago and Las Vegas. The company, which says it is one of the largest of sellers of sushi in the country, calls it the “No Blue” campaign. A spokesperson says the move is “especially timely in light of the rapid decline of many species including bluefin tuna, an endangered fish that researches estimate could become extinct within the next 10 years.”

An action like this will win high marks from environmentalists and the sustainability crowd. But what about the paying customers who are used to coming to your restaurant to eat bluefin? Why are they going to spend their dining dollars with you anymore?

Maybe there’s a middle ground for bluefin. And Paul Kahan may have found it at The Publican in Chicago. His idea there: Seek out local fisheries that support a sustainable catch, and import your fish from there, and only there.

For Kahan, that source turned out to be New Zealand. He says bluefin stocks thrive there due to sustainable practices already in place, making it the most sustainable sourcing option. The Publican will employ once-a-month shipments of New Zealand bluefin, which Kahan says will keep food and freight costs down while still supporting sustainable fishing practices. He’s already hatching plans to serve it raw as a crudo, cured, seared and deep-fried, the better to show off the fish’s versatility.

We like The Publican’s solution because it addresses both sides of the bluefin issue: how to keep it on the menu while also ensuring that it won’t be overfished. We think the bluefin fans among your patrons might like it, too.