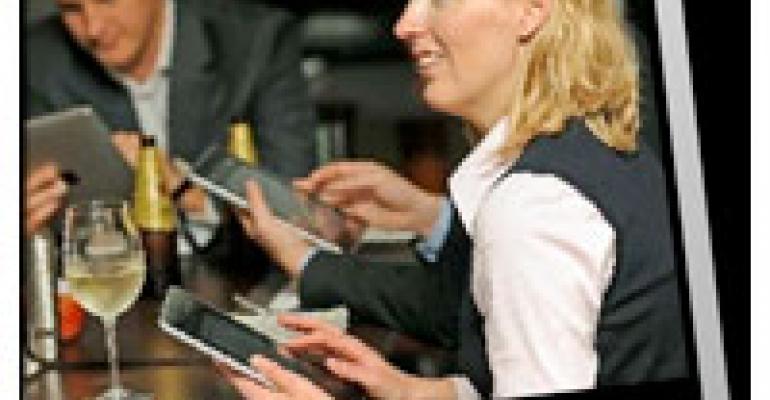 Apple iPad: There Can Be a Restaurant App for That

As helpful restaurant tech gadgets go, it might be hard to top Apple’s red-hot new iPad tablet device. Use it instead of a printed menu and you instantly have an unparalleled marketing tool that might also provide significant operational efficiencies. Mundo Global Tapas Bar & Restaurant in Australia was the first to give it a try. Who will be next?

IPad manufacturer Apple reports more than two million iPads have been sold since the device was introduced earlier this year. Sales might have been even higher if production capacity had been more robust. With its 9.7-inch color screen, ease of use and whiz-bang performance, the highly portable device has been a game-changer in the technology world.

Could it also be one for restaurants? Keep your eye on how the iPad works out for Mundo, located in the Rydges North Sydney Hotel in Australia. This restaurant was the earliest of early iPad adopters, buying 15 on the first day the device went on sale. It put them to use immediately to replace printed menus for patrons of its 50-seat dining room. Voila: An instant point of differentiation.

“Mundo is the first in Australia to take a step into the future with the introduction of a custom-made iPad menu application,” the restaurant says. “Diners can now see a picture of what each dish looks like and view tasting notes before making that all-important decision of what to order. So come on in and be one of the first to experience this revolutionary event and let the global flavors enchant you!”

Using small movements of their finger, patrons can peruse the entire menu, then hone in on particular dishes that appeal to them. Each dish is then displayed in lush color via a full-screen photo, accompanied by pop-up boxes that contain tasting notes and wine and beverage suggestions. After making a selection, a flick of the customer’s finger sends the order to the kitchen.

We see the iPad as a buzz-builder and customer magnet right out of the box. A vast number of people have heard endless hype about the iPad, but only a relative few worldwide actually have one. That leaves millions of folks who’d like to see what all the excitement is about without having to go to an Apple store to do so. People love new technology; why not give them the newest?

Apple is famous for the plug-and-play capabilities of its products. However, iPads don’t arrive ready to use as a restaurant menu. You’ll need a specialized app to get going. One key to Mundo’s early adoption was that it had the foresight to have an iPad menu application developed before it bought the units. You’ll have to include the cost of creating your menu app when figuring out whether you want to ditch your printed menus and go with an iPad version instead.

The iPad retails for $499. Other costs would include an in-house Wi-Fi setup to support your restaurant’s fleet of iPads. And there might be a hassle or two involved with making sure a customer doesn’t walk away with one of your iPads, drop one on the floor or otherwise render it inoperable.

But while there are some hard cost issues to think over, we think the first couple of restaurants that adopt an iPad-based menu are going to attract a lot of publicity and new customers, and have lines down the block for months. If you can swing the investment and keep the back-end technology running, this looks like a huge opportunity for somebody.