The original Turk’s Inn opened in 1934 by George “The Turk” Gogian, an Armenian immigrant who made his way to Hayward, Wis. The restaurant soon became known for its ornate decoration, belly dancers, red velvet walls and black-and-white photographs of Gogian family members and famous customers including John F. Kennedy.

Inside The Turk's Inn

When the original restaurant closed its doors, two friends who spent their childhood there decided to buy all the memorabilia from the 80-year-old restaurant at auction after the death of the last Gogian family member. Varun Kataria and Tyler Erikson took all the tchotchkes they bought at auction and opened in Bushwick in late June.

Designed to be a comparable replica of the original restaurant, the new The Turks Inn is 5,000-square-feet with an almost identical entryway. The bar, an original from the restaurant, was designed by a student of Frank Lloyd Wright’s in the 1940s and transported to Brooklyn.

Walls are drenched in ornate wall hangings and hand-woven textiles to recreate both the ‘70s kitsch (which was not kitsch at the time) and the imagined Ottoman Empire aesthetic. The artwork is a mixture of antique photographs, original Turks Inn memorabilia and photographs of the original space.

Up on the roof

The rooftop, a welcome respite from the bust restaurant streets below but in the quiet of neighborhood streets out of the city, is partially covered and styled in a Moroccan garden design with potted and hanging plants. The original Turk’s Inn neon roof sign is displayed prominently on the roof as well.

The menu has vegetarian options like the crudité platter, a green olive salad with feta cheese, haloumi and cheddar bites with spices and green bean falafel, among other options.

Known for their dry-aged steaks at the original restaurant, Carballo brought a hanger steak onto the menu as a nod to the original chef. 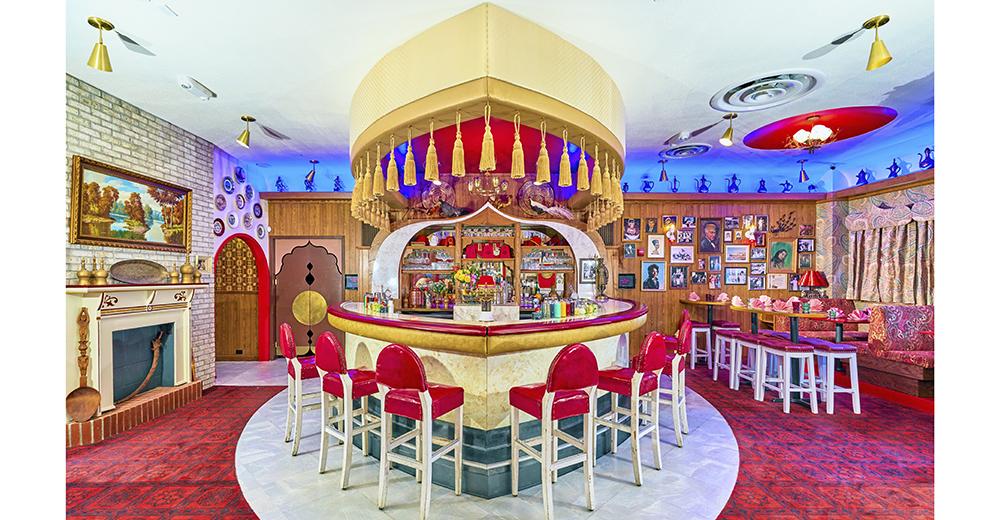