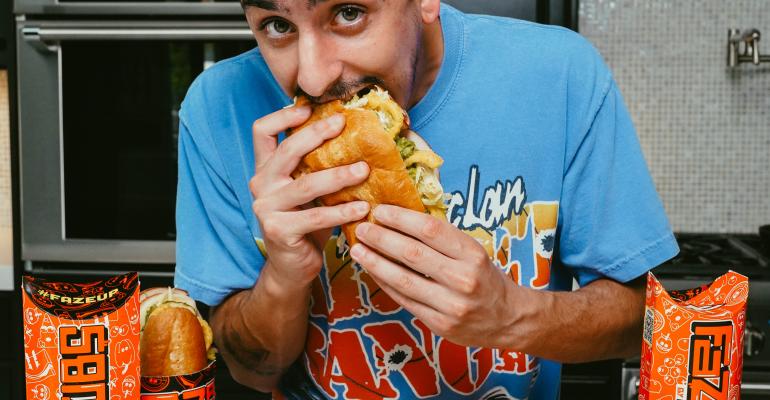 Virtual Dining Concepts announced another star-back virtual concept aimed at enticing Gen. Z: FaZe Subs, which will be launching in partnership with DoorDash and esports organization, FaZe Clan, in select cities across 23 states, including Florida, Ohio, New York, and Georgia.

FaZe Clan is a professional gaming organization and group of YouTubers/social media influencers that competes in international videogame competitions and just recently went public in a $725 million SPAC deal. This would be Virtual Dining Concepts’ second partnership with a Gen. Z public figure after the company’s successful launch of MrBeast Burger, in collaboration with the popular YouTube personality.

“We look for the most culturally relevant creators and none other than FaZe Clan comes to mind in the world of gaming,” Robbie Earl, Virtual Dining Concepts president and cofounder told Nation’s Restaurant News. “We always look for a partner that is more than someone who is just going to be paid to promote the product. [FaZe Clan] is fully behind the brand. The subs are integrated into all of their content and overall, they share the same enthusiasm and excitement for breaking a new brand in the virtual restaurant space that we do.”

FaZe Clan’s members worked with Virtual Dining Concepts chef Eric Greenspan on creating a menu of sandwiches, including a sub called “The RugFather,” named after YouTuber Faze Rug, who co-owns Faze Clan. Each of the sandwiches are named after gaming terms, topped with potato chips as a signature ingredient, and are all geared toward FaZe Clan’s widespread community of gamers.

While celebrity-backed partnerships have become commonplace in the virtual restaurants and ghost kitchen industry, Earl said that the quality of partnership is much more important than just slapping a famous name on a takeout bag.

“We look to for someone that can convert on alternative products, which is the best indicator that they have the ability to sell,” Earl said. “We look for if they’re invested in the category, if there is synergy—do they have creator content that’s based on food already? FaZa Rug is always talking about food, for example. So, this is about a natural integration into their story and our company. The name alone won’t do it.”

Currently, Faze Subs will be available exclusively on DoorDash, due to a pre-existing partnership the third-party delivery platform has with Faze Clan.

In celebration of the new brand partnership, fans of the group and their sandwiches will be invited to attend FaZe Rug’s Summer Festival in Los Angeles presented by FaZe Subs and powered by DoorDash, where attendees will be able to try the virtual brand’s offerings for free.